Remember that wasted trip I took to Zoe & Co. last summer? Instead of driving 2.5 hours to Rhode Island, I should have driven half an hour to Yonkers. I thought I knew every decent store available to full bust bra shoppers around New York City. Whenever anyone from the Bronx asked for a recommendation, I’d sigh and say, “I’m afraid you’re going to have to make a trip to Manhattan.” Boy was I wrong. Not only do residents of the Bronx, Yonkers and Westchester not need to travel to Manhattan, residents of the rest of New York City may want to make a special trip to Yonkers.

Suzette’s Lingerie has been around since 1958, but I only heard about it last February. I made my own special trip there last Friday to reward myself for lowering my LDL cholesterol from 219 to 137 since my birthday in December. I lost 25 pounds in the process, creating baggy cups and a slippery band on my 36H Fantasie Jana–a great excuse to visit a new bra fitter. (I tend to avoid writing about weight loss on Hourglassy. However, if you need to recalibrate your eating habits, I highly recommend a nutritionist. Appointments qualify as preventive care so they are covered 100% by insurance. My own nutritionist, Maria Bella at Top Balance Nutrition, is amazing.)

Before I continue, I admit that I’m violating my own rule not to publish a store review based on a single visit, so if you have a different experience from mine, please let me know so that I can consider updating this post.

Now back to the store-y. I had a good feeling about Suzette’s when I called a few weeks ago to see if they carried the Panache Envy. I wanted to try it because the Panache rep at Curve told Leah and me that this style was super popular, and it’s even coming out in a body in Fall/Winter 2014 (with adjustable hooks at the bottom for those of you with long torsos). For more on this bra style, check out reviews from Sweet Nothings and Bras I Hate. 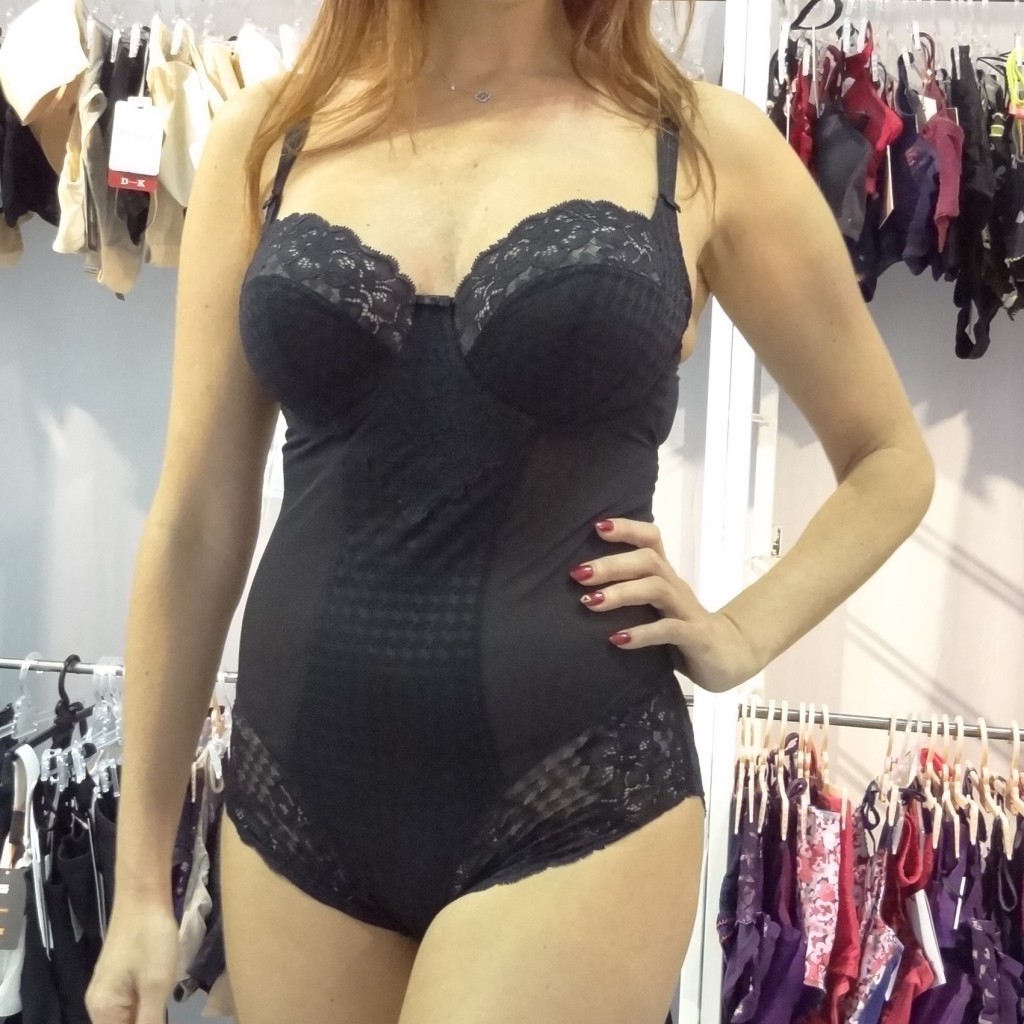 A woman named Megan answered the phone, and when I told her my size, she asked, “Is that European or American?” Good sign. They didn’t have my size in stock but were expecting a shipment soon. When I visited last Friday, that shipment hadn’t arrived, so it’s still on my To Try List.

My first impression of the store was that it was spacious, uncluttered, and pleasantly pink–an important feature since you can see Victoria’s Secret from its front door. Too many “good” bra stores focus on inventory to the exclusion of atmosphere. When I spend money on something as special as lingerie, I want a setting that is more than simply functional. Suzette’s customers that upgrade their fit from Victoria’s Secret (and Suzette’s wins over a lot of frustrated former VS customers) don’t have to downgrade their shopping environment.

My fitter Shannon greeted me as I walked in the door, and when I told her I needed a fitting after losing weight, she took me to a dressing room and got started right away.

Her method was new to me, but it seemed to work. First, she tugged my bra straps up and had me hold them there so that she could get a precise measurement of my underbust. She got 31″ and decided to add 3″.  Before coming, I had measured my own underbust super tightly without lifting the straps and gotten 35″.  Next, she measured above my breasts to check against her first measurement. Finally, she measured the depth of an individual breast–another first for me! After a little calculating, she decided to begin with a 34I.

When she brought the Panache Dahlia and I checked the paper tag, I breathed easily again. It was a UK34G with “I” handwritten in ink onto the paper tag. It turns out that Suzette’s default sizing system is American. I found this super confusing, but at least they’re consistent within the store.

The Dahlia was gorgeous with its sexy, streamlined lace. It tacked perfectly and lifted beautifully. If Suzette’s had had a 34GG in stock, I would have bought it even though it didn’t give quite as much forward projection as I prefer. However, I felt there was a slight line of indentation where the top edge of the cups met my breasts. It wasn’t quite quadraboob, but it meant I would be self-conscious about not having a smooth “rim” under my tees. (For reviews by two bloggers who own this bra, check out Faustine’s Foundations and Iliketweet.) 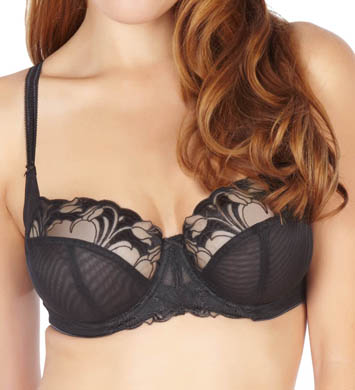 Shannon’s suggestion for dealing with this issue was also interesting. It involved holding the bottom of the cup where it is closest to one arm (using the hand of that arm) and lifting the cup ever so slightly, then using the opposite hand to gently press the breast tissue away from the rim. I admit I was scandalized by this. Wouldn’t this negate the scooping and swooping? It didn’t matter because it didn’t work for me, but I wonder if any of you have tried this. And guess what?! Every saleswoman in the store learned this technique from Freddy, the best bra fitter in the world. I must remember to ask Freddy about this the next time I see her, but for me, finding out that the fitters had been trained by Freddy gave Suzette’s a GIANT boost of credibility.

Shannon also brought me the Dahlia in 36G, and while it seemed to fit, I’ve been burned too many times by Panache 36 bands stretching out prematurely. Next, she brought me a Panache Idina, which I fell in love with and will review later. She also brought a few Fantasies, including the pinstriped Fantasie Lois, but by this time everything else looked frumpy compared to the Idina.

Only as I’ve written these styles down here has it dawned on me that every bra Shannon brought me was a current style. They were the styles we would have seen at Curve last February. Never did she bring me a Tango, that boring standby that so many others have tried to sell me in the past (and that I bought once and swore never again when I saw how both east-west and pointy it made me).

Here are a few other things that I appreciated about Shannon and the rest of the staff of Suzette’s:

Speaking of knowledge, I’m extremely pleased to know about this store. It’s the kind of place I can recommend to a bra-fit newbie without (a) worrying that the fitter will put my friend in the wrong size because the store doesn’t carry the right size, or (b) feeling like I should go with her to ask questions or point out fit issues on her behalf. Actually, I enjoyed shopping at Suzette’s so much that I’d be happy to go with my friend for the chance to shop there again.