In honor of the American “Black Friday” (the day after Thanksgiving when stores open early and people line up in the wee hours of the morning to get crazy deals like 50 or 60% off big ticket items), British reproduction vintage clothing company Collectif held a “Black Thursday” sale during which every single item except coats was half off.

I’ve had my eye on this brand for quite some time, but the pound to dollar exchange rate is never in the dollar’s favor, shipping from the UK to US is costly, and their prices aren’t exactly cheap to begin with. But for 50% off, everything suddenly became a lot more affordable, so I picked up two pencil skirts, Ahoy Sailor and Agarva Matte.

Unfortunately, Collectif’s sizing isn’t nearly as hourglass-friendly as Pin Up Girl Clothing, so I was a little unsure what size to order. My waist is between a 10 and 12, but my hips are squarely a 14. I asked for advice in an online forum and was told that in these two items, my best fit would be 12, but it would be quite tight across my butt. Both these items are 98% cotton and 2% elastane/spandex, so that sounded fine to me.

I was thrilled when the skirts arrived. Both fit, and the quality is also top notch, better than PUG or Bettie Page in my opinion. 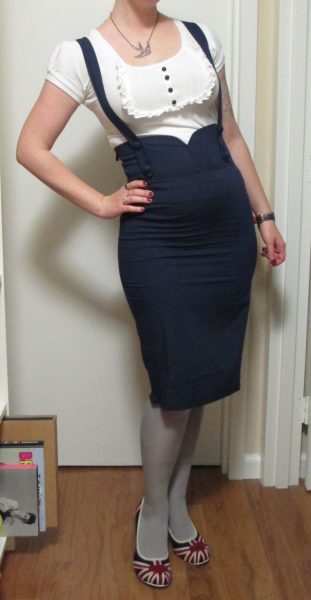 Even though both skirts are the same color and same fabric content, they feel totally different. The Agarva is thin and smooth, sort of like suiting fabric. The straps are adjustable in front and back, with buttons at two heights on both sides and buttonholes at two heights on each end as well. You can wear them crossed in back or straight. I’m wearing it with the back on the loosest setting (top button and bottom buttonhole) and in the front, lining up both buttons with both buttonholes.

I was impressed that the skirt did not hike up while I walked, which a lot of pencil skirts tend to do on me. It was, however, a little tough to walk in because the legs are so narrow. I was essentially forced to take fast baby steps, especially in heels. I do have one serious complaint—the side zipper sucks. Not only is it hard to zip up, but it ends up looking all bumpy. You can see this quite clearly in the second photo, on my left side. It’s so smoothing on the other side, I really wish it had an invisible zipper up the back instead.

Next up is the Ahoy Sailor Skirt: 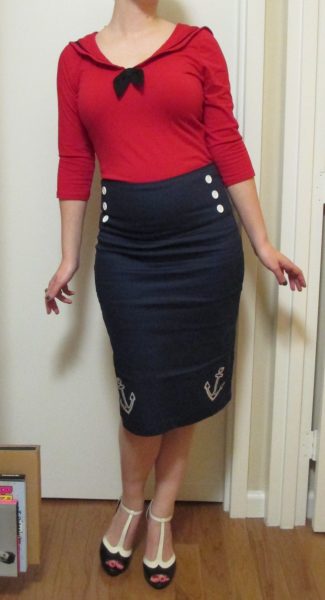 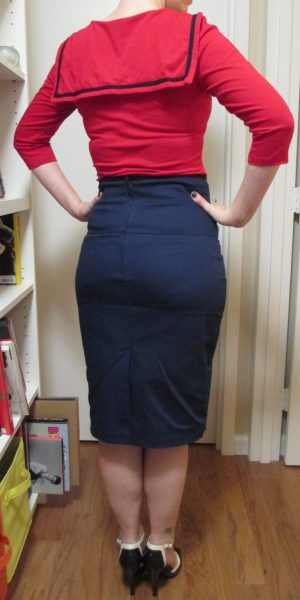 The fabric on this one feels like heavy, stiff twill. With both of these skirts, I really wish the waist was smaller. The Ahoy fabric, in particular, has the potential to really flatten and flatter your tummy, but on me it’s too loose and does not achieve this effect. It’s actually a little bit unflattering on me, because Ahoy’s midriff seam curves under my little belly and basically emphasizes it. Annoying! Agarva doesn’t have this issue since it doesn’t have the same seam.

Aside from it not matching up to my measurements, I have no other complaints about Ahoy. I like the stiffness of the fabric because it doesn’t show visible pantylines and it looks very crisp.

In addition to loving the clothes, I was really pleased with Collectif’s customer service. For some reason, when I placed the order I was not charged shipping. Afraid that my order did not actually go through, and also not wanting to accidentally steal from a small business, I emailed them, and less than 24 hours later I got the following response:

Not too sure what happened there, but we have definitely received your order! Seems like a glitch and you got lucky ; )

Wow, okay! I thought maybe they would want to charge me after the fact, but they let me keep my accidental free shipping. Thanks Collectif!

Lastly, I’m happy to report that both skirts come with spare buttons and are machine-wash cold. No stupid dry cleaning bill here!

Now, as for those tops I’m wearing with the skirts, they’re both from Pin Up Girl Clothing (well, actually they’re from PinUpGirlStyle.com’s swap/sell group). The white one is the Dolly and the red is the Sailor top. I don’t have that much to say about these shirts. They fit like your standard medium women’s fitted tee. They certainly don’t fit as nicely as a BiuBiu or Urkye shirt. The fabric is very soft. I kind of wish the Sailor sleeves were either a little looser or a little longer, as they tend to bunch up around my elbows.

However, what I will complain about is that they are really freaking short. The Sailor is just long enough to cover the button on a pair of low-rise jeans: 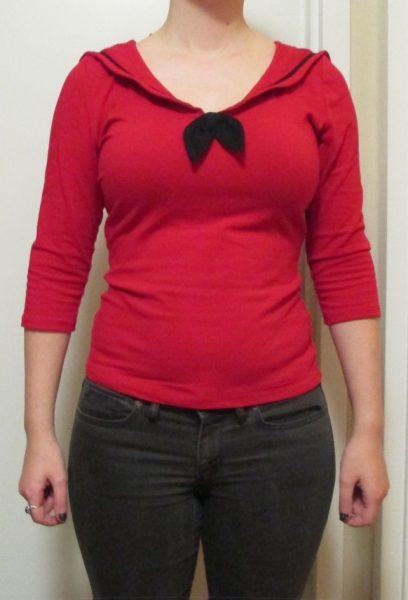 The Dolly top, though, doesn’t even reach my pants! 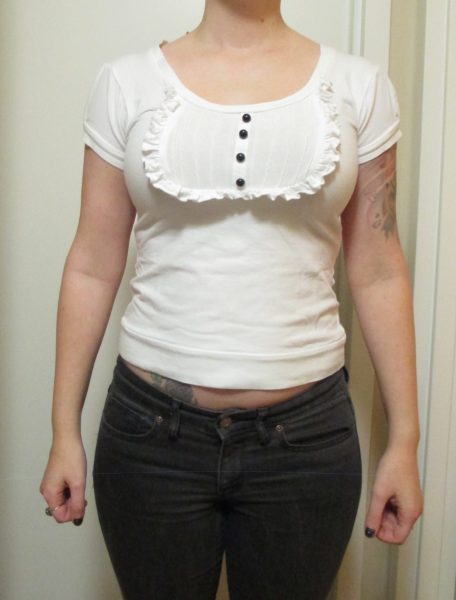 The description online says it’s “long enough to wear tucked in, or out over jeans.” Well that’s laughable. I know I have a long torso, but this is ridiculous. It’s lucky that I own so many high-waisted skirts and shorts, because I literally can’t wear this shirt with anything else. I grew out of belly shirts when I was a teenager and I have no desire to go back to them.