After having a laughable time trying the provided bustier at David’s Bridal earlier this month, I decided I should get my bridal lingerie now so I can use it while trying on more wedding dresses. In “unusual” sizes, it’s a lot easier to pick (or alter) a dress to suit the undergarments than the other way around.

So when Figleaves put the Masquerade Hestia basque on sale for half off, I jumped at it, especially since the only sizes left were (and still are) 30FF and 30G. I knew that if the basque was successful, it would be in one of these two sizes; I would either take 30FF as the sister size to 28G since there are no basques in 28 band as far as I know, or 30G since often I need to size up with half-cup, vertical-seamed bras.

I was going to order both and return the one that doesn’t fit, but as funds are a little low right now, I really preferred to order just one. After consulting a forum on Facebook, I got answers about fit that were literally all over the place—some people said it runs big in the cups, some said small; some said it runs tiny in the band and that they sized up two numbers, others said it was true to size or big. So I ended up ordering 30FF and crossing my fingers. 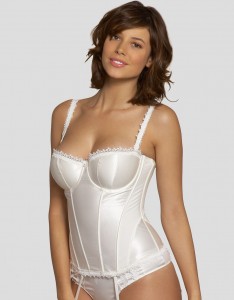 Well for once I got lucky! It fits just about perfectly. It’s not too shallow in the cups or too wide in the wires. As usual, the wires are a little wider than I really need, but the only brand in which that isn’t the case is Comexim, so I take what I can get otherwise. The point is, there is no stabbing, no rubbing in my armpit, and the cups don’t wrap all the way around to my back, so the wire width is totally acceptable.

I do wish the far corner of the wires was a touch shorter, but that’s just because I’m concerned it may prove to be visible under a dress, not a comfort issue. (Though I suspect it wouldn’t be as supportive if that were the case.)

Speaking of support, I am so impressed! It really hoists me up, and in fact gives much more lift on me than it does the model in the above photos. It provides a bit of Ren Faire-style uplift, but without the extreme “cakes on a platter” look of a real corset.

It certainly does run quite small in the band, so I’m glad I ended up with a 30. With it being so tight and with so many hooks and eyes (I think there were 12?) and the lacing, you do need a second person to close it all. One problem to note with the lacing is that the lace hole panels are placed over the tightest set of hooks while the basque is not being worn. This means that when you’re wearing it on the loosest hooks (as you should when it’s new) and it’s being stretched on your body, there’s about 3 inches of space between each side of the laces and all the hooks are fully visible.

As I didn’t bother with the lacing when I tried the basque on, I’m concerned that the ribbon may actually prove to be too short with such a large gap. That’s easily remedied by simply buying a new piece of satin ribbon, but it’s something to keep in mind if you don’t have any craft stores in your area.

Now as for comfort, I basically want to wear this thing every single day. In a conversation with Darlene and Mia, I compared it to Thundershirts, the shirts for dogs that supposedly control their anxiety by exerting constant, gentle pressure. I feel so contained and comfortable—it’s like I’m getting a full-torso hug from my bra. (Maybe I should invest in some light corsets!)

The quality, too, is stellar. The front panels second from the center and the adjacent back panels are your standard polyamide/elastane mesh mix, but the rest of the panels include cotton (cotton!) and silk (silk!), two things that are rare among full-bust bras in my experience. Overall it feels and looks like moderately shiny satin. The boning seems to be made of similar material to underwires, so it maintains its shape well yet is flexible enough to not dig into your ribs.

As for the boning, the angled pieces are genius. They really enhance an hourglass silhouette and I bet would help create an hourglass shape on ladies with a more straight shape. They also look modern and sleek. While this garment does provide some shaping, it’s in no way “shapewear” like Spanx. It minimizes my tummy a little, but the part that extrudes the most, the area under my belly button, is pushing the basque out more than the basque is pushing me in. If I really wanted the appearance of a flat stomach, I would need to wear Spanx under the basque. And I think we all know I don’t care enough to do that. I want the freedom to eat and sit and dance on my wedding day!

The basque is quite long; even on my freakishly long torso it just reaches the top of my mid-rise bikini underwear, so I’ll have to carefully select panties to go with it. I don’t want bulk around the base of the basque, but I also don’t want to wear a thong or anything that will ride up in the back or be uncomfortable. I do not need to be extricating underwear from my butt while wearing a wedding dress!

One last note: Much to my pleasure, the color in real life is darker and more yellow-y than it appears in Figleaves’ photos. I think it looks very close to white online, but is more of a true ivory in real life. And thank goodness for that, because I do not find white flattering on my ghostly pallor at all!