I’ve had a bra revelation.

My first Ewa Michalak bra is the most amazing piece of fabric I’ve ever put on my breasts.

And it’s not even the right size!

I’ve been wanting to try this fairly new Polish brand for a while. I was rather hesitant, though, because the conversations on some of the bra forums I follow made it sound like the sizing is all kinds of crazy. The fitting instructions certainly are. I tried to measure myself using the Ewa method and their calculator then told me I should order a 32E. I don’t think so!

Then I happened to find a gorgeous Ewa bra for sale on Bratabase in 30FF. Since so many reviews of the brand note that it runs excruciatingly tight in the band, I thought this would be a good starting point.

The particular model is the CHP Milady. (Ewa’s “CHP,” “HP,” and “CH” bras are all half-cup padded bras with slightly different profiles.) The bra is really dramatic and sexy, yet so comfortable—a difficult combination to find in large cups. 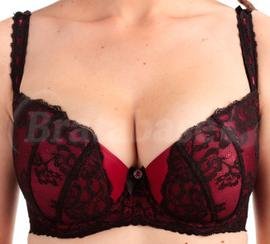 As for fit, it’s definitely one of the tighter 30 bands I’ve tried, but I think a 28 would be slightly better. When I first tried it on, I could just barely close it on the tightest hook and it wasn’t riding up. But by the end of the day, it had risen enough in the back that I’d definitely prefer a 28. Unfortunately, you have to special order size 28, 26, and 24 (yes, they will make 26 and 24 bands!), which makes it non-returnable and also means I’d have a delay while they make the bra. So I might stick with 30s. And why am I so willing to make do with 30s even though it could be tighter? Well because despite that number, the gore still sits perfectly (perfectly!) flat against my sternum.

The gore is also the perfect height on me. I’ve realized recently that the base of my breasts are of average distance apart, but the tops are really close together. So the gore needs to either stop low, where my boobs are far enough apart that the gore’s width doesn’t matter, or high, where the gore can split my boobs all the way up the middle. If the gore is sort of halfway between these two heights, as it is on Freya’s padded half-cups, then no matter how narrow the gore, it’ll dig into my breast tissue simply because there is not a spare centimeter in between them.

The Ewa Michalak gore is just low enough to rest perfectly between my breasts and up against my sternum, but high enough not to be a plunge bra by any means.

Another fun thing about this bra is that it creates some serious “boobs on a platter” cleavage. I haven’t looked this perky since I was 18! It is nothing short of anti-gravitational.

Now here comes the unfortunate part: The cups do seem to be a size too small. There is a tiny bit of side boob that I can sort of pull back in using the scoop and swoop. Since the cups are so open at the top, there isn’t really quad boob. But there is what I’d describe as “spillage.” My boobs look like they’re pouring out of the bra in the front, and bending all the way over means I have to do some rearranging. Additionally, after a full day of wearing it and settling into the cups, it became much more obvious that I need to go up a size.

Still, Ewa fulfills all my very specific needs: narrow wires, extremely deep base of the cup, no rubbing in my armpit, and straps that attach to the band close together in the back (so they don’t constantly feel like they’re slipping off my shoulders). So I think it’s a testament to the perfection of the shape that even a too-small cup is only sort of an issue.

Even in the wrong size, this bra feels made for me. It’s just incredible and such a relief.

Despite the sizing being a little off, I’d say this was a very successful purchase. I got to figure out the right size without taking much risk or waiting for international shipping. Now that I know exactly what to buy, I can’t wait to try more! Ewa’s prices are extremely reasonable ($30-$40 per bra), the colors and designs are just beautiful, and the fit fulfills all my shape needs. If you need narrow wires and deep cups, this is definitely the brand for you.

3 Comments on Off the Rack ~ My First Ewa Michalak