I got my Claudette order earlier than anticipated! Right after I placed the order, though, I ended up talking with some other ladies who’d tried Claudette, and became worried the size I’d ordered (30FF) would turn out to be too small in the cup. I had considered ordering up one cup due to InvestInYourChest.com’s review noting that the Dessous runs small, but unfortunately the color I wanted (neon green) was only available up to 30FF even though it’s made up to 30G.

But then I happened to find the neon green in 30G on BareNecessities.com for another ridiculously low sale price and free shipping, so I decided to order a second one. BareNecessities has a 60-day return policy, so I figured I could just return it if needed and would only be out the couple of bucks it’d cost to mail it back.

I’m really glad I found it on BareNecessities, because 30G is definitely the right cup size. Unfortunately, the other one I purchased, the En Dentelle in 30FF, is still full-price so I won’t be replacing it with a better-fitting size. 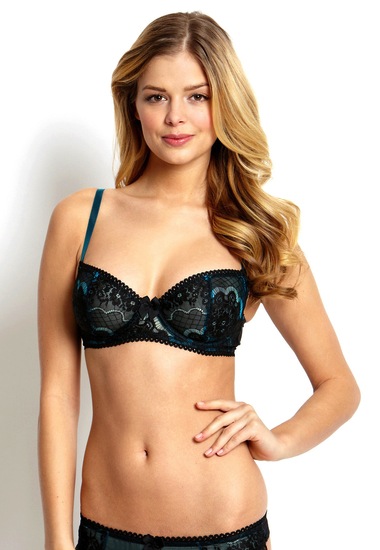 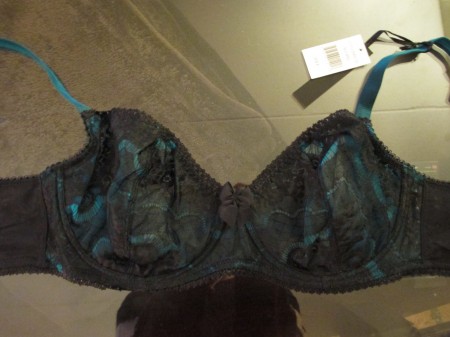 Aside from the En Dentelle being too small in the cup, I think it’s also just not the right bra for me. It has much more of a balconette shape than the Dessous, so the straps attach further out to the sides and closer to my armpits and aren’t as comfortable. It also has ever so slightly wider wires than the Dessous and seems to be slightly shallower at the base—the two features that are the opposite of what I need.

Further, the neon underlay isn’t as visible as I’d anticipated, so it looks more like a standard black lace bra. It’s still really pretty, but I’m not heartbroken that it doesn’t fit. That just leaves more room in my underwear drawer for the upcoming Claudette offerings in a 28 band!

As for the Dessous, even though the 30 band is too big, it’s tighter than some other 30s I’ve tried so it’s still wearable. The triple hook-and-eye helps it feel firmer. The color is absolutely to die for. It is day-glow highlighter-bright neon. I wonder how it would look under a blacklight.

I absolutely adore the shape of the cups. One thing I’ve been craving yet haven’t found since I stopped wearing Victoria’s Secret eight years ago, is cups that have a true triangle shape, so that the straps gradually blend into the cups and attach more toward the center of the cups instead of the outer edge. I don’t want straps rubbing against my armpits!

In the few reviews I found of this bra, it was noted that the horizontal seam perfectly covered the nipple. But on me, my nips are actually totally in the middle of the single-layer upper piece of fabric. So I won’t be wearing any clingy tops on a cold day with this bra

The cups are of average depth and average-to-narrow wire width. The overall shape is round without much projection. Normally I go for bras with more “oomph,” but the Dessous has almost a minimizing quality to it. I’ll be curious to see how the fit of the 28GG’s compare once they come out (any day now!).

I’m really looking forward to trying Claudette’s 28 bands and can’t wait to see what they release next. This is definitely a brand to watch!