More Cleo by Panache bra reviews! My lingerie drawer is going to explode if Cleo shows another collection at the upcoming CurvExpo that’s as bright and fun as this one has been.

When Bare Necessities had a 50% off all sale prices deal recently (exclusive to newsletter subscribers, so I suggest you sign up!), I couldn’t believe the outrageously low prices and I bought two more Cleo bras for just $19 and $16.50 with no shipping. I picked up the molded “Karen” in the hopes that a bigger size would make it a better success than the “Darcy” and the seamed “Zia” in the rare pink pattern.

First up is Zia, which sadly was an absolutely awful fit on me. It looked so similar in style to the Cleo Meg, which I had great luck with, so I ordered the same size (30FF). But it’s not even close. Maybe Meg was a fluke because all the Cleo bras I’ve tried since then have needed a totally different size. 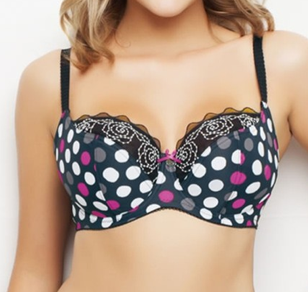 Zia’s 30FF cups were absolutely tiny on me. The bra gave me very sad-looking squashed quad boob and was just horribly uncomfortable. Weirdly, they were also too short in length from the wire up to the top edge of the cup. Perhaps a third of my breast tissue was not encapsulated by the cup. Bearing in mind that this is the same size as my Meg, I found this aspect to be particularly strange.

Unfortunately, there were no more sizes left at all by the time I received the bra in the mail, so I couldn’t exchange it for a bigger size. And I really wished I could. The bra is so lovely, even prettier than in photos. The color is very vivid and the embroidery is unexpectedly modern. 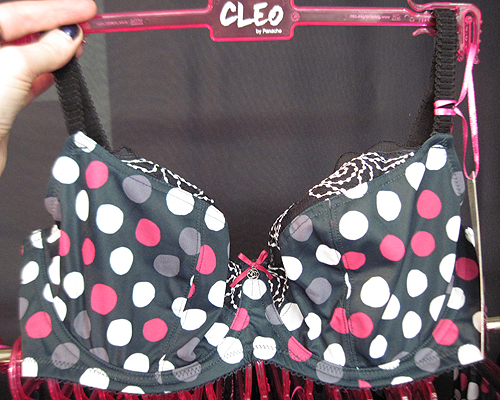 I was also pleasantly surprised to see that the band is made of the same thick, opaque fabric as the cups. It drives me a little crazy when bras have thin mesh wings. It stretches and wears out so much faster than heavier fabric and often gives me phantom back fat. The Zia fabric is quite strong and thick, yet silky smooth and felt really nice against my skin. There are tons of yellow dot Zias on eBay, but after paying just $19 and falling in love with the pink, I just can’t bear to pay more only to settle for the yellow.

Cleo’s Karen was definitely more successful, but still not a perfect fit. Since the 30FF Darcy was too small, this time I went with 30G. A 28 band would have been slightly better, but 30 was all that was left in stock, so I went with it. It’s hard to go wrong for a mere $16.50, after all. 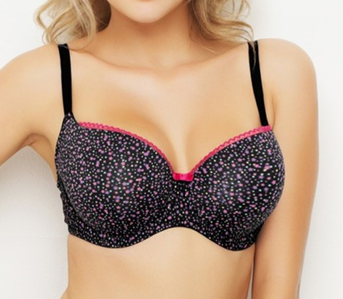 The cups are the right volume, but as I suspected the band is a touch looser than I prefer. The gore does not sit flat. As the shape of the cups isn’t quite right on me (too wide and shallow, as are all Cleos), I don’t know that going down a band would actually ameliorate this issue. The cups are just too stiff and unforgiving.

Karen does give really great uplift and feels comfortable despite its shortcomings, so I kept it and have worn it numerous times. The neon star print may be exerting undue influence, though—I just can’t resist neon stars for some reason! But I also found it to be one of the few bras I could comfortably wear during my last period, when my breasts inflated close to a whole cup size for a week. Something about the wide wires, I guess, helped encapsulate all the extra oomph I don’t usually carry around. 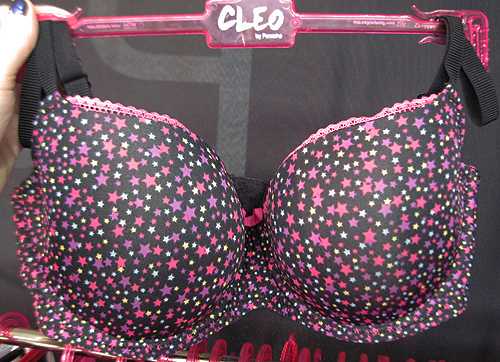