I’ve had my eye on a number of bras from Cleo by Panache’s fall collection, which I first saw at CurvExpo NY in early 2012. I only ended up buying the Meg because I really don’t need any more bras. But my saved eBay search for Cleos in my size turned up Darcy, a molded cup balconette, for only $17.50 last week, so I bought it anyways. 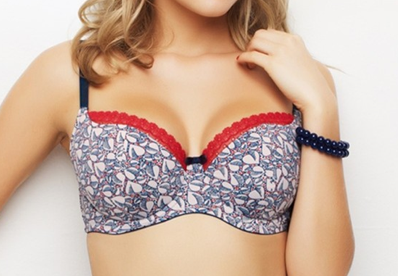 Unfortunately, Darcy fits me nothing like Meg. All my Cleos are 30FF. I usually take a 28G, but have always found Cleos to run extra tight in the band. Yet while the 30FF’s that I already own fit close to perfectly, Darcy is too big in the band and too small in the cup.

Unfortunately, the eBay seller only had that one size and didn’t accept returns, so I can’t try a 28GG unless I pay a lot more than $17.50. So I can’t in good faith assess the fit other than recommending not sizing up in the band if you normally do (and maybe considering sizing up in the cup, especially if you’re between sizes).

However, I think I can still assess the shape and overall look, both of which were fabulous. The pattern and color are just darling. The red, white, and blue heart-shaped leaf print is a wonderfully modern combination of nautical and girly.

The wires aren’t too wide, though certainly wider than Fantasie and Freya. And the shape is nice and round, much like the manufacturer’s photos, although it definitely does not give the Ren Faire-like cleavage pictured above.

The seams are flawless—they don’t show at all under tops. I also quite like the straps: They have a horizontal stripe texture that holds them in place nicely and adds just a touch of extra visual interest. Besides the off sizing, my only other complaint is that the red lace along the cup edges sticks out from my chest, but even that isnâ€™t noticeable under clothes.

In her overview of Panache’s offerings, Bras I Hate notes that Darcy is similar to Juna, Sadie, Rita, Poppy, Martha, and Ellie. So if you get on well with any of those, you may want to try Darcy.