I’ve got a couple bra reviews this week. I’ve had my eye on these since the winter CurvExpo last February and now they’re finally available.

First up is the Fantasie “Tina.” 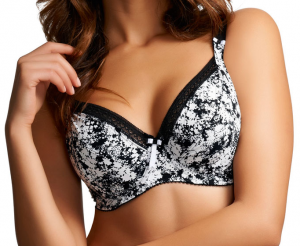 As with all Fantasie bras I’ve ever tried, the wires are perfect on my body. Perfect perfect perfect! They’re narrow with a moderately high center gore. The cups are also deep enough at the base that I don’t get that overlapping fold thing that happens with too-shallow cups. I only wish Fantasie offered 28 bands, because the brand definitely fits true to size, so the 30FF’s I buy ride up a bit in the back and I always start out on the tightest hook, which is a big no-no.

As for the Tina specifically, while it appears in the photo to have very triangular cups, it’s way more of a balconnet shape in real life. The cups swoop horizontally like the Cleo by Panache Cleo below. Fantasie calls it a “balcony” bra. Is that the same thing as a balconnet? Well either way, it fits beautifully. The cups are very round, but not push-up. It looks natural but not minimizing, and disappears under clothing. I absolutely love it. And of course I can’t get enough of the paint splatter-like print.

Next up is the Cleo by Panache “Meg.” 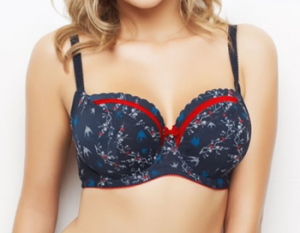 I used to have a love-hate relationship with Cleo. I loved the way everything looked, but hated the way it (didn’t) fit. I always found that the wires were waaaaay too wide and the cups waaaaay too shallow. I also found the band so tight that I needed to go up a size. I basically gave up on Cleo after trying a few different models and finding none of them to work.

A couple months ago, I bought the Bravissimo exclusive Cleo “Karina” when it was on clearance. I couldn’t say no to the bright color, the price, and the 34% cotton content. [You can get up to speed on Leah’s cotton quest here.] And while the cups were still rather shallow, it wasn’t nearly as bad as I remembered. I still found I had to go up a band size, but the great shape and seamless look under clothes made the bra a success.

So when I saw this tattoo-inspired swallow print bra at Curve, I knew I was going to give Cleo another shot once again. It’s still a bit mixed, but I’d call it a success anyways. I went up a band again, for a 30FF. It’s a wee bit looser than I prefer a new bra to be, but it’s tight enough that I think a 28 wouldn’t have worked. As with the Karina, the wires are a little wide, but certainly wearable.

The fabric is a little sheer, but not by much. It seems like a double-thick mesh, and it’s very stiff. I wonder how long the stiffness will last after a few wears and washes.

The very horizontal shape means I have to really shift myself into the cups, but once everything’s settled into the right spot, the shape is quite pleasing. It’s round and uplifted yet natural-looking. However, I think the wearer’s breasts have to be the perfect shape for this bra or else the fit will be just off. With my slightly larger left breast, the red strip at the top of the cup dips into my boob just a teensy bit, resulting in an ever so slight pointyness; and while my slightly smaller right boob gets a perfectly rounded shape, there is a single vertical wrinkle along the panel seam toward the top of the cup, which is usually the result of a bra being designed for full-on-top breasts. I think the cups would’ve been better on me if they were a little taller, i.e. reaching higher toward my shoulder. But the placement under the armpit is great: it’s high enough to encase all the breast tissue but not so high up that it cuts into my arm when I move around.

I seem to have a lot of little complaints, but I still really like Meg. The roundness is great, and I adore the pattern. Cleo will never be my go-to brand, but I’ll certainly keep considering it if they keep making such fabulous designs.