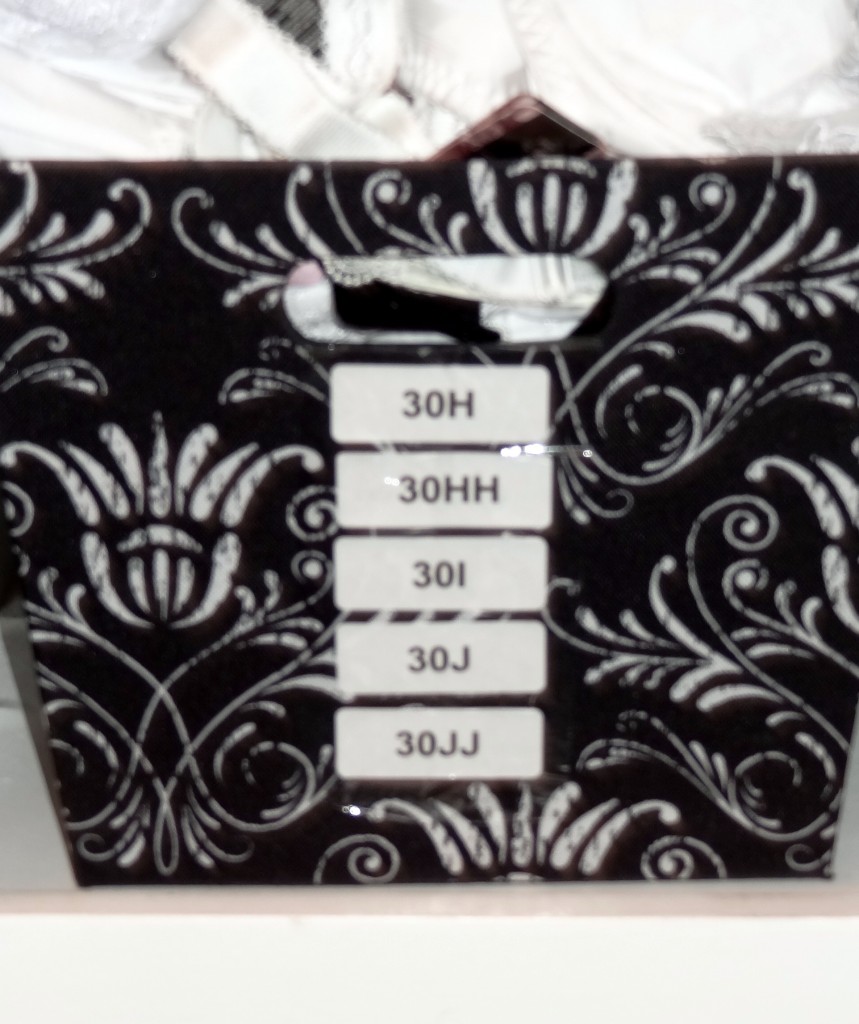 Your eyes do not deceive you. That is a bin of bras in sizes 30H-30JJ at La Bella Intimates in Winter Park, Florida. Although La Bella carries a few other brands like Anita and Panache, most of its inventory is comprised of Kris Line, the Polish brand I introduced to you last March.  When I was in Florida a couple of weeks ago, I seized the opportunity to try both the brand and the store that carries it. My mom and sisters wanted to come, too! Here’s my lovely mother outside the shop. 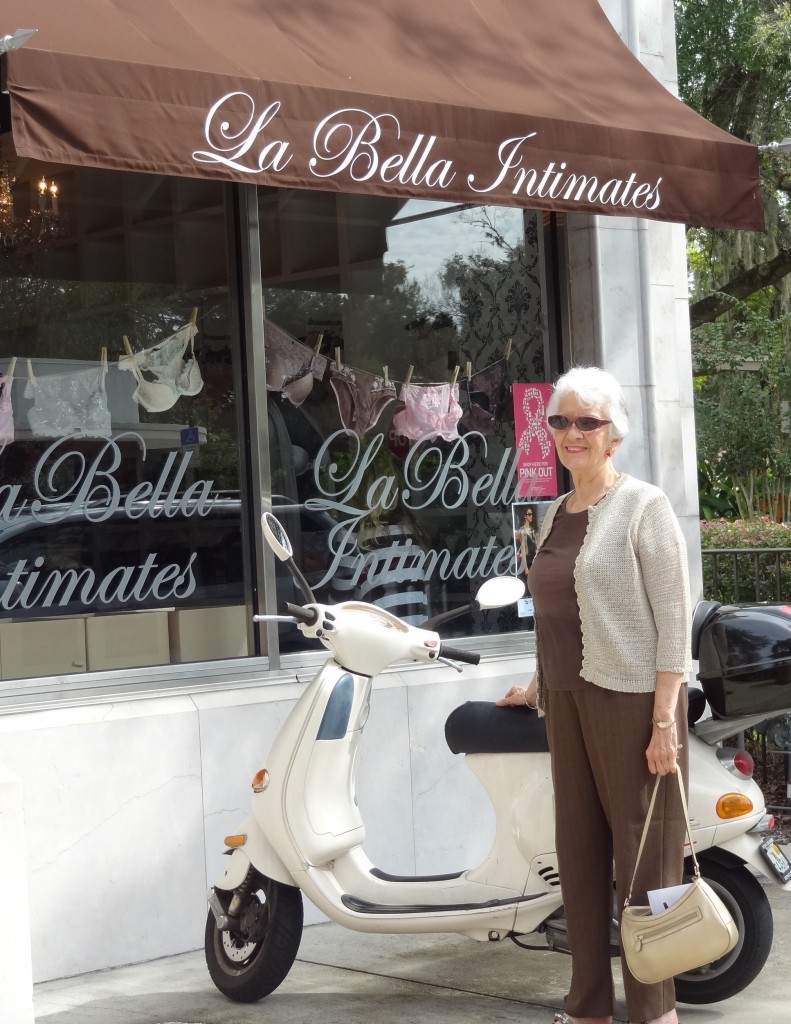 This is a store that gets the atmosphere right. There are chairs for waiting outside the spacious dressing rooms, robes to wear while browsing instead of getting re-dressed, a water fountain, and lots and lots of pretty things arranged pleasingly throughout.

I didn’t get to meet the owner, but her right-hand woman, Allison Richardson, was lovely. In fact, in reviewing MiaRose’s checklist for a good fitting, I realized that Allison did many of the things on her list: always asked before entering the room or touching me, taught me how to put the bra on and inspected it carefully, and didn’t push me to buy a particular size or brand. She respected my own bra-fitting experience and willingly brought out the 34H I requested when I disagreed with her about the fit of the 36G. When she saw how the 34H fit, she congratulated me on getting it right. I’ll describe my mother’s and sisters’ experiences later  below (as well as the great $125 Kris Line chemise that I snagged for $25), but this seems like a good place to tell you about the Kris Line Brilliant that I bought, and the Kris Line Perle that I tried.

First, the underwires fit me perfectly. There is none of my frustration with extra space at the bottom of my cups with my Kris Line Brilliant, and the wires end exactly where they’re supposed to.

Second, I love the lift, but it’s not my favorite profile. The Kris Line provides the lift I look for–almost up to my collarbone, just the way I like it.  However, there is a little ski jump going on with my largest breast in my profile. It was much worse in the 36G, and it’s less apparent after I settle my breast into the cups and hike the band higher, but it’s there nonetheless. It’s interesting because it isn’t so much quadraboob happening at the edge of the cup so much as just beneath the edge, as if the lace in the upper half of the cup is drawn slightly tighter there. I wish I had tried this bra in a 34HH, but by this time my sisters were calling my cell phone from the front of the store and telling me to hurry up! So I don’t know if I would have had extra space at the bottom of the HH cup or if it would have solved my ski jump issue at the top. I’ll try to lose a little bit of weight to solve this instead.

When I do lose weight, I won’t need to buy a smaller band any time soon. Another good feature of this bra: the band is T-I-G-H-T. I can barely fasten the loosest hook. However, even after wearing it for just a few hours to break it in, I could feel it adapting to my body. I’ve worn it all day for three non-consecutive days now, and it isn’t the torture machine I was afraid it would be. Instead, it gives me the freedom of a bra that stays in place and does its job. Surprisingly, there is room for me to hike it up a centimeter or two when I’m trying to get rid of the ski jump, but I learned something very interesting from Allison: I tend to put my band too low on my back. I try so hard to avoid a too-high band that I err in the opposite direction. Eyvette from the Town Shop has also mentioned this to me.

This bra cost $88, comparable to a Chantelle, and I consider it well worth the price but not a bargain. It’s sturdily constructed, the  power mesh in the band is very firm so far, the elastic in the straps is nice and wide, and there are three hooks in back. I especially appreciate this generous elastic gathering from the outer edge of the band to the strap. It keeps the edge of the cup from digging into my underarm. 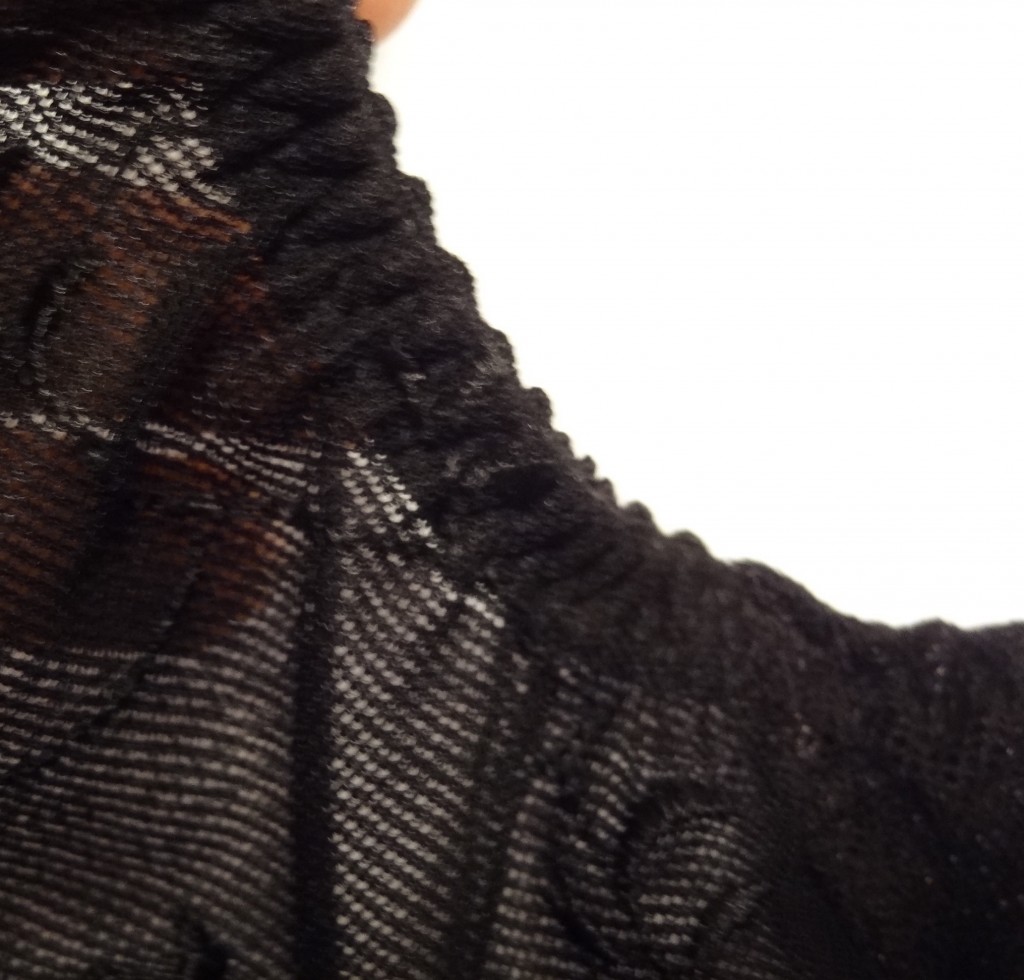 Two details I’m less than impressed with: (1) the circular connector thingy in back; and (2) the cheap plastic buckle detail at the center gore.

A quick survey of my other bras just now showed me that all but one of my below-$100 bras have the circular connector thingy, including my Fauve Lucia and Masquerade Persia. The one $88 exception was my Prima Donna Satin. Circular connector thingies reduce the expense of bra production because they don’t require extra stitching to secure, but they also contribute to bra straps that won’t lay flat, an issue I’ve been running into lately with my  Fantasie 4520. As for the plastic buckle in front, with a bra style name like “Brilliant”, I would expect at least a rhinestone!

Finally, here’s a closeup of the lace in the cup. There is elastic beneath the lace at the very upper edge, which is excellent for accommodating breasts with different degrees of fulness on top. However, the row of roses in the middle of this top panel is less flexible. I actually blame the roses’ rigidity for causing my ski jump. 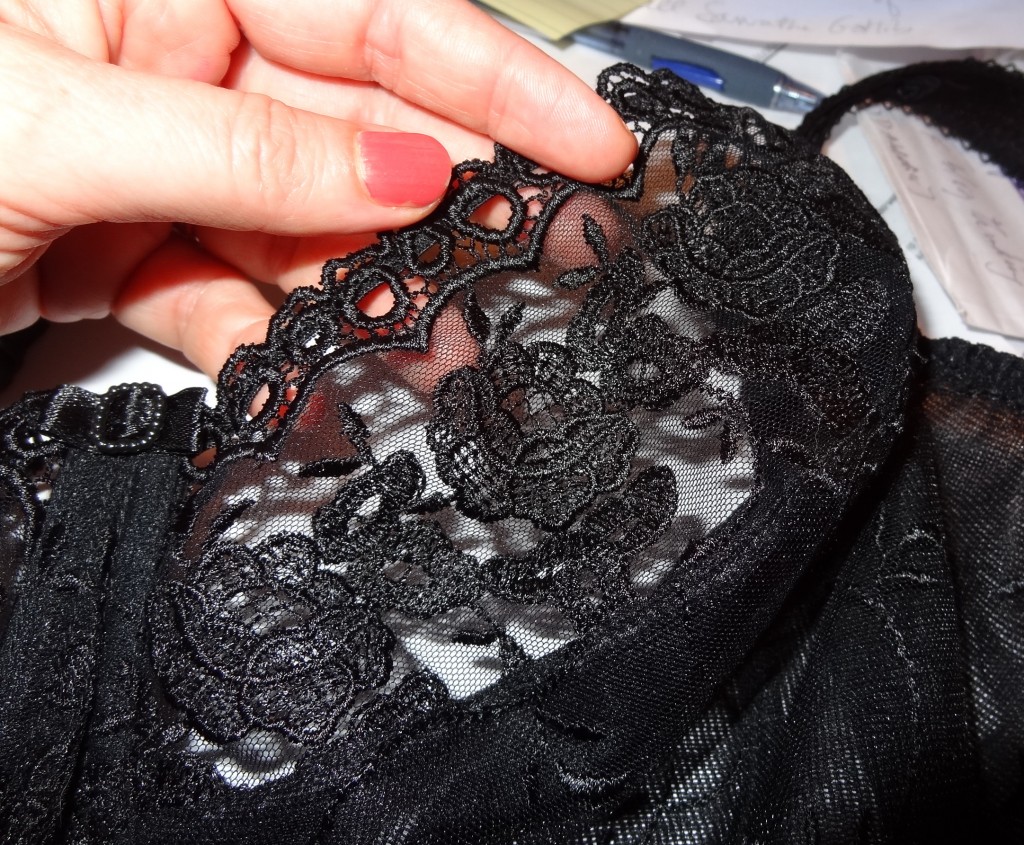 I don’t have as much to say about the Perle, because as you know, my mom and sisters were rushing me to leave, but I preferred the rounder profile shape of the Perle. Unfortunately, it only came in white, ivory and pink, and I needed black. The Brilliant is super sexy in black, and in the photos above, the seams are barely visible beneath my tee shirt.

As for my mom and sisters, Allison and her assistant did an excellent job of serving them. They listened to their concerns and addressed them, which meant center gores that don’t tack for my mom and one sister because they don’t like their bands too tight. Mom picked up a pretty peach wireless Anita bra. My sister took home a white Perle and an Anita sports bra. I’m so proud of her! She’s been reading Hourglassy from the very beginning and is the real reason we went to La Bella on this trip. My other sister discovered that she wears a 36J in Kris Line, and the lift of the Brilliant took pounds off her, but she decided to wait to make her purchase–a decision that her fitter graciously supported.

The one item I wish La Bella had had for my sisters was a bra with more centered straps. Each sister has a little less fullness at the top of her breast, which causes an empty space where the cup meets the strap. When I stopped at the Town Shop with June of Braless in Brasil last month, we learned from the fitter Maritza that a more centered strap will take care of this. If La Bella Intimates has one weakness, it would be a less than exhaustive inventory for those for whom Kris Line isn’t optimal. For those customers, a supplemental visit to Unique Lingerie in Ocala would be a good idea. I never said that bra shopping perfectionism was easy!

I was also able to handle the Kris Line loungewear in person. The fabric is wonderful and the quality very good. The sizes seem to run small, so keep that in mind when ordering. La Bella only had clearance items on the floor because the new season’s shipment hadn’t arrived yet.

Here’s a cute little Kris Line “dress” in XL that I tried. The leopard print fabric is woven, and the solid fabric is jersey (stretchy). 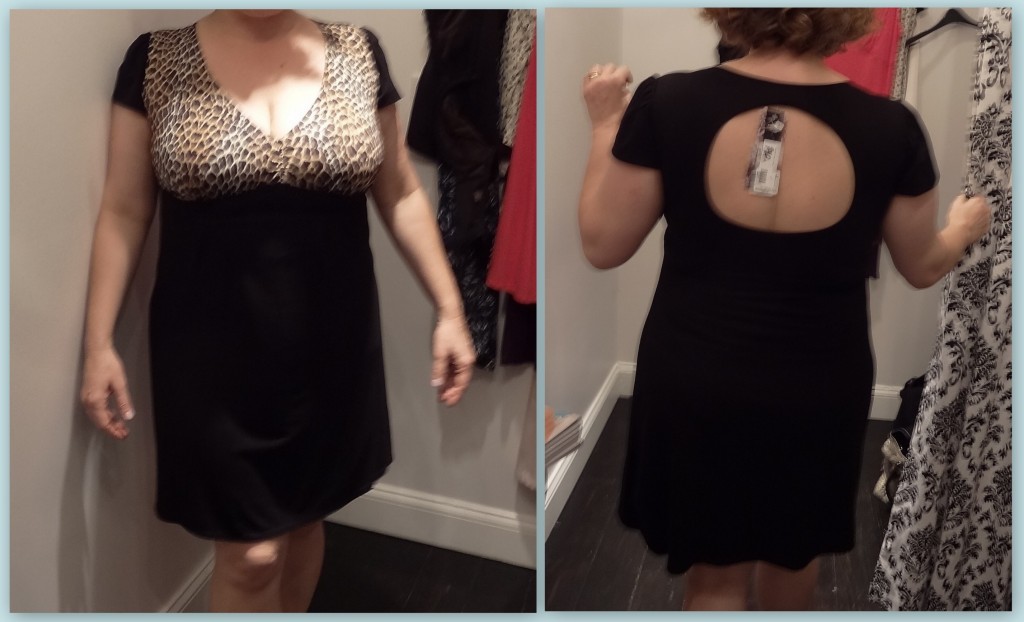 Here’s the item I actually purchased. 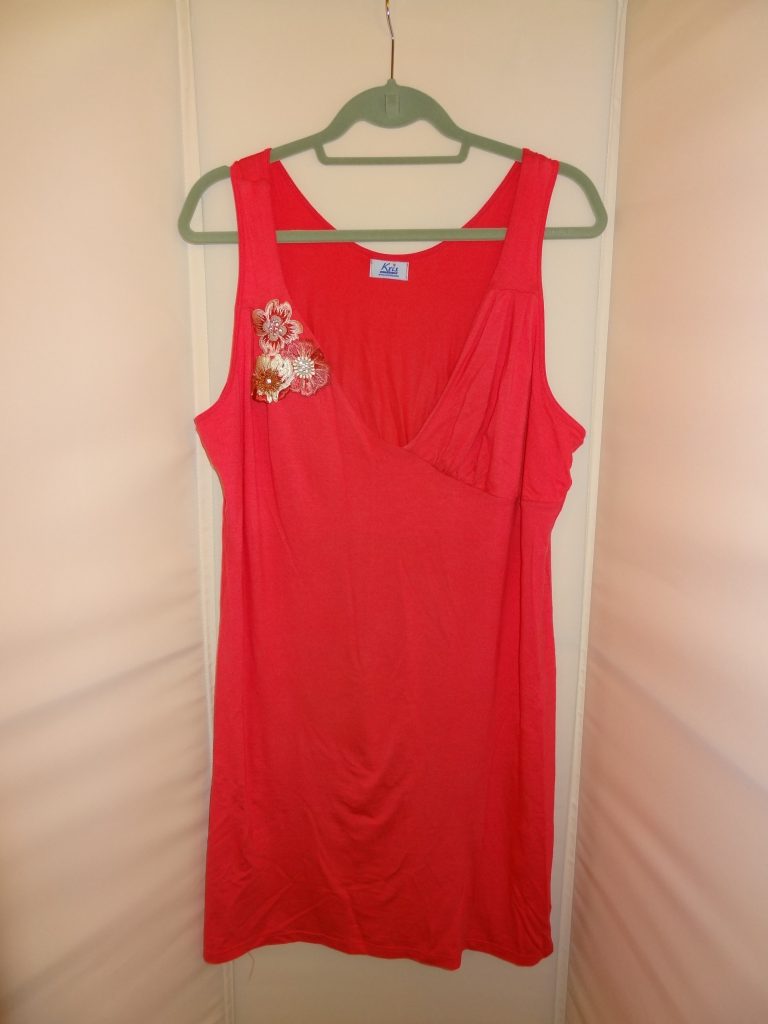 When I asked Mr. Campbell if he liked it the first time I wore it, he answered, “What’s not to like?”, which explains why I’m not posting a photo of me wearing it. There’s boob spillage while sleeping, and the shelf isn’t elasticized at the bottom so that it’s really just an extra layer of fabric rather than a shelf, but it’s extremely comfortable, hugs my body in the right places, and I feel pretty and sexy when I wear it. But it looks so ordinary on the hanger that I almost didn’t even try it on. I think the 80% off of $125 was what got me to take it into the dressing room!