Welcome to the eighth weekly Corporate Curves Report. I’ve been writing this column for two months now, so I have finally picked up the courage to share my views on the much debated subjects of cleavage, large busts in the workplace, and breast reduction. I’ve read The Rack column here on Hourglassy, which is an excellent series on breast reduction, and I’ve been wanting to write this post ever since reading it.Â  I must stress that I respect everyone’s own choice, and as long as it is what makes them happy, I have no problem with it. However, personally, it makes me physically nauseous just thinking about it. It’s literally a physical reaction that I can’t control. The reason I felt like writing this post right now was an article about Sophia Vergara in which she said she had once considered a breast reduction because her publicistÂ  recommended she “reduce a couple of things that may have gotten in her way”. 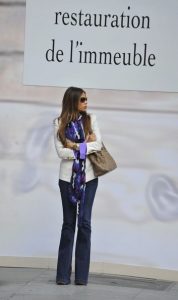 My first point is what people really notice first when they meet someone they’ve not met before:

Some background first. I’m beginning to think that it’s fairly common these days for women to have a D+ bust, so why is it still supposedly a big deal in a woman’s career? But then I asked myself, “Has having a bigger-than-average bust ever gotten in my way in my work life?” and I have to say no, I can’t think of a single thing that my bust has gotten in the way of.

Nor have I ever been assumed to be dumb because I have big boobs. That in my opinion will only happen when one dresses to look like a music video girl. Flashing a lot of cleavage at work is a personal choice, and my choice is no, and my bust has never been frowned upon. The few other busty women in my workplace don’t flash theirs either, nor does any woman in my workplace. There are 88 core team members in our huge ERP project, out of which 29 are women, plus 6 assistants are are women.

It’s only when women themselves think of their bust as an issue that it becomes that–at least in their heads. But honestly, at work people do not concentrate on the bust size of coworkers, and in bigger workplaces for sure noone is the only one with a bigger bust. Sure bigger boobs are noticed, how can they not be? But so are big ears, haircuts, women who use tons of makeup, very thin or very big people. Generally any physical aspect is noticeable that you would use to describe a person so that another person would recognize who you are talking about if they’ve never met, but only seen, that person.

For example, yesterday I had to describe a coworker of mine to someone who said they had not met that person but needed to speak with him. So I described him asÂ  “fairly tall, bold, dark beard and a very loud deep voice”. If a woman might not like to be described as “average height, dark medium length straight hair and a big bust”, then I do think that some men might not be so keen on being described as bold – but then both are true and noticeable, so it should not be a big deal.

What is your eye drawn to in the pictures below? I don’t think it’s the bust for most people. As for the photo on the left, it isÂ  probably the color of the dress and then face. In the second photo, even with cleavage on show, your eye is most likely first drawn to the smile. The second picture was taken to demonstrate why the old Bravissimo dresses were too cleavage-y for work without scarves, a situation that has since been corrected in their latest collection.

Finally,Â  some ramblings about breast reduction.Â  I can see why many women who’ve had a breast augmentation might end up wanting to be reduced. The bust is not natural to them, they’ve not been used to being busty, so they don’t know the challenges it’ll bring, and it all might be too much in the end. As a naturally busty woman, I wonder why they don’t think of it before they do it: where will they find clothes that look respectable, where can they get bras and bikinis, and how much large breasts weigh.Â  In this Dina Manzo interview, she discusses her breast reduction after a boob job.

If you have health issues because of the bust, then such an invasive operation is probably a good choice. BUT–and this is a big but here–a correctly fitting bra, especially early enough, will greatly help prevent shoulder and back aches. Even later later in life withÂ  me, it has helped and I have no health issues that have to do with my bust. For younger girls it would be crucial to get them correctly fitted and into pretty bras early in their teenage/young adult lives, especially sports bras. There is no reason to need to feel ashamed over bouncing boobs and yes, there are pretty undies for busts too. A properly supported bust will lift the whole look and posture so it’s easy to stand up straight and not feel any shame over having a larger bust.

I am also linking to an excellent blog post by The Butterfly Collection on bra fitting, about who needs to add inches and who doesn’t, and how the band and cup correlate. Personally, I have never considered having a breast reduction and could not ever imagine doing so. Ugh – I’ve spoken, long ramble over 🙂

10 Comments on Corporate Curves Report: Bust in Your Way?