Last week, I wrote about Claudette, Curvy Kate, Panache, and Cleo by Panache at the CurvExpo. This week I’ll share my findings from Marlies Dekkers, Mimi Holliday, Freya, and Parfait by Affinitas. Some of the photos may not be safe for work, so click below to read it all. And click each image if you want to see it bigger.

The Undressed by Marklies Dekkers bras have all kinds of interesting straps that follow the curve of your cleavage in front, or a grid-like pattern in the back. They’re so fun! But they’re still stuck in a 32+ and A-F rut. Booooooo! They make one bra up to G cups, but it’s a boring molded bra without the fun straps. Why? It’s not as if the straps serve any purpose beyond decoration. Why don’t busty girls get them?

Then when I told the woman there that my readers are “big-bust,” she tried to convince me that the plain molded bra is great for big busts because it has a high gore that contours to the breast. Um, A to F is not big bust! Sigh…

Anyways, if you are lucky enough to fit into their limited size range, they have some really yummy neon colors coming out: 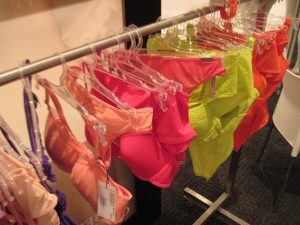 They also had an amazing bustier on display made of gold thermoplastic. Not sure how practical it is, especially since it only comes in Small, Medium, and Large (so, what—34A, B, C?), but it looked cool nonetheless. Wish somebody would make these in real bra sizes. 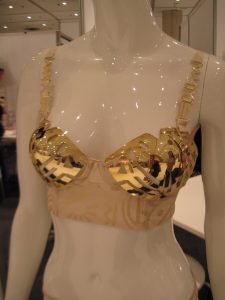 Mimi Holliday makes such stunning pieces, but I had to laugh because they’re a little behind on trends. Like many other brands, they had lots of saturated and jewel-tone colors.

They also had some amazing neon, a bit of leopard print, and polka dots. However, leopard was really big at the last Curve show. And while neon and polka dots are very on-trend in American fashion this summer, these bras won’t be on sale for months. So by the time they’re available, they won’t really be “in style” anymore.

It seems to be really hard to find Mimi Holliday in the US. I rarely even come across international online stores that have more than a couple pieces. However, I picked up a postcard from the Mimi booth that says Absolutely Lingerie Inc in Los Angeles is their exclusive US distributor. So if you’re looking for something in particular, you can try emailing or calling them, or leave a message on their Facebook page, to find out where to purchase the item. The website wouldn’t load when I wrote this, but their email is info@absolutelylingerieinc.com and the phone number is 301-289-8044.

Finally, my favorite European brand! I had a great chat with an Eveden rep. She was so nice and very enthusiastic. I wish I’d gotten her business card!

I’m happy to report that Freya’s upcoming longline bras are all going down to a 28 band instead of the prior 30. They still only go up to a G, but at least it’s some progress. There are three new ones: Just Flew In (photo below), Patsy (coral with peach polka dots and trim), and a Deco strapless longline. The Eveden rep says the company is slowly adding more 28s “here and there,” and that they hope to eventually have more. I specifically asked why the molded half-cup versions all start at a 30 instead of a 28, but she didn’t really know. She said she could ask the design engineers and get back to me, but I don’t think I’ll hear back since I forgot to take her card. I got the impression that there are no plans to add 28s to that particular style, though.

Freya has also come out with a new molded-cup sports bra. An attempt to compete with Panache’s sports bra? This one is made of moisture-wicking fabric and felt incredibly light. It’s also available in a great navy colorway with orange trim. It only goes up to an H cup. However, I was told that the basic sports bra is going from a maximum H cup all the way to K! But I’m not sure whether that means the underwire or the soft cup one (or both), because the catalog still only lists up to H cup.

Next, I learned about Freya’s sleepwear. I don’t wear pajamas and it’s never occurred to me to consider matching them to my bras, but I was excited to hear about Freya’s “secret support” nonetheless. All the tops come in two ranges of sizes: Extra Small through Large, then “medium bust” (B-DD) or “fuller bust” (E-G). The tops essentially have soft fabric bra cups built in with no underwire. It’s better support than a crappy “shelf bra,” so you can feel comfortable wearing it around other people or running outside to get the paper. But it’s just fabric, so it’s still comfy cozy.

Lastly, I took a look at Freya’s new swimwear. I was a little put off by the patterns. They look like what you’d find in a touristy surf shop at the beach.

But there were a couple highlights, like this adorable yellow polka-dot number. It seems like Freya makes this same suit over and over every year in different colors—and I couldn’t be happier about it! I have an older bikini with a similar shaped top and it is great. Even when I grew another cup size, this one still fits very well. I guess it’s just flexible. 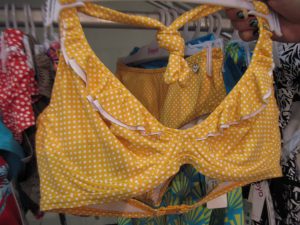 I was also beyond pleased to see that Freya’s following the retro trend. Look at this gorgeous suit! It would be so flattering on so many body types. And I like the idea of pairing the red-orange top with the black bottom. I need to snatch up as many high-waisted bikini bottoms as I can while this trend still stands. 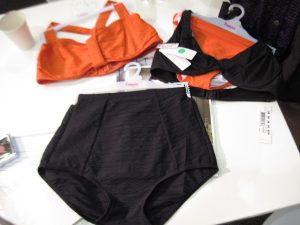 We also discussed Fantasie a bit, but most of their upcoming offerings are rather mumsy. And I was told once again that there are no plans to add 28 bands. Apparently there isn’t much demand for them. So if you wear a 28 and want to wear Fantasie (their molded tee-shirt bra is my favorite ever, even in my sister size of 30FF!), then email them and let them know. If more of us demand it, they will start offering it.

Parfait really knows what they’re doing when it comes to marketing. They are not only so accommodating and happy to talk to press, but they also have a great catalog with information about the company, an extremely clear yet informative layout, and handy charts that compare sizes across eight different countries. I’m going to keep the catalog just for the charts! Of course, it makes me long for France’s bra sizing, which goes D, E, F, G, H, I, instead of double letters and letters that get skipped entirely like in the US.

The newest offerings aren’t quite as exciting in the color department as previous seasons, but it pays homage to vintage looks (think “Mad Men”), which of course I love. There were definitely a few standouts, like the choice of two longline bras that come in slightly different lengths. Here is the Spring/Summer 2013 “Danielle” high-waisted brief and “bralette.”

The longline I’m really into, though, is the Arabella in girly pink and purple. It’s a bit shorter in length than Danielle. I saw it on a model the previous night at a Lingerie Alliance party and fashion show Darlene and I attended, and instantly knew I had to have it. It also comes in white with black trim, which I think is quite edgy-looking. 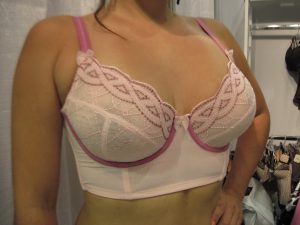 I was also really into the Florence bra and high-waisted briefs with removable garters. It’s joined by an underwire babydoll and a thong. The whole collection screams “vintage bridal.” 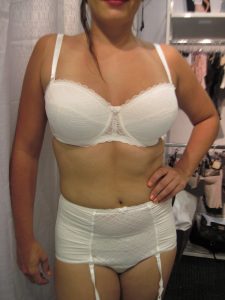 Some of Parfait’s lace items are really clever. The Madeline is a sweet underwire camisole that looks like traditional lace, but the fabric is actually created on a mesh machine. So it’s incredibly smooth and oh-so lightweight, and is all the same height so it won’t show through clothing. 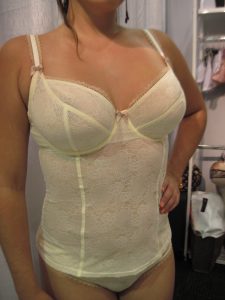 The trim on Lola is the same. Parfait also made sure to line up the pattern on the back of the thong, which gives a really lovely effect (especially with that keyhole). 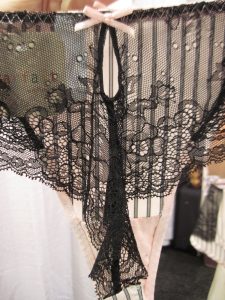 Sadly, Parfait still has no plans to extend their size range or add swimwear. But I’ll keep haranguing them about it at every CurvExpo!

6 Comments on Off the Rack ~ CURVexpo Summer 2012 Part II