I bike to my one year post-op appointment in a tank top and shorts, wearing my favorite bra of the moment, a “full busted” balconette by Paramour. The style is aptly named “Sweet Revenge,” which is what I feel every time I put it on. It’s supportive enough that I can jump around in it, but I feel so sexy in pink and black lace, and I smile to myself every time I ride my bike without a sports bra– I could never have done that a year ago, weighed down physically and emotionally by 34G’s I was squeezing into stretched out 34F bras. Here’s the bra (Here in 34DD. Mine is a 34D, and my girls fit nicely into the cups, with none of the porn-star cleavage shown in this picture.) http://www.bratabase.com/browse/paramour/sweet-revenge-115702/34DD/

I lock my bike up down the block from my surgeon’s posh office on 61st street, off Park Ave, an office with a gaudy, gilded lion’s mouth for a bathroom faucet, with framed magazine articles discussing the health benefits of liposuction, where I always feel out of place. The front desk girls recognize me and chirp hello, and I wait about 10 minutes before one of them leads me back to exam room 2, where I’m given a pink gown and told the doctor will be right in. Here I am waiting for my doctor! I have to buy a top or a dress in this color…I love it! 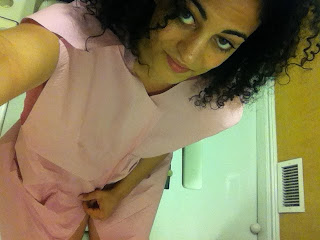 My doctor is in her forties (I think), and I’ve never seen her wearing flats. Even on the day of my surgery, she teetered into the room in 4 inch open-toed sandals, a crisp, fitted summer dress and what appeared to be, through my blurred nearsightedness (I had to take my contact lenses out before surgery), a Burkin bag. Her face is taught, her hair blonde and pin-straight, her breasts clearly augmented, her waist nipped in (maybe with surgery, maybe with a personal trainer named Gunther). She walks in smiling, a first, and holding a digital SLR camera. She says hello, how are you, and walks toward me eagerly to examine her work. Here comes the fun part.

She pulls the left side of my gown away, reaches forward to examine the scarring underneath my left breast. “Nice.” Then the right. She makes a dismayed face. “This scarring is irregular. What happened here?” She’s referring to the raised, pink scars around my right nipple, which formed after the stitches on that side were rejected, causing little pockmarks to open up along the outside of my areola. It happened in August, about a month and a half after my surgery. She was on vacation, and I was referred to another surgeon who cleaned out the oozing wounds and applied surgical tape, telling me that it is not uncommon for one side of the body to heal at a slower rate than the other. Once the sores healed and closed up, they left little pink marks, which thickened over the months, despite applications of scar creams and strips and tape, into keloids. I have olive skin, which is prone to keloid scarring, and we discussed the possibility of irregular scarring before my surgery. My doctor had assured me that the chances of keloid scars forming was very, very slight. “Surgical scars are very thin and precise.”

On the day of my one-year post-op, she stares at my breasts, shaking her head. “I’m really upset about this. Most people don’t come in for a one-year post-op, so I rarely get the one-year pictures. You came, and you have scars. This is technically a bad result.” I laugh. “I think it’s a pretty good result. I feel great, they look great. My back doesn’t hurt anymore.” She sighs. “It was a very large reduction. What size bra are you wearing now?” I tell her 34D. We had originally agreed that the final size would be a C cup, a 4 cup size reduction. She decides I must be purchasing the wrong band size. “You should be wearing a 36C. They’re a C.” I try to explain to her that my rib cage has never measured anywhere near 36″, that at my thinnest I was wearing 32″ bands, and that I’ve lost 15 pounds since last year. She doesn’t seem to hear anything I’m saying. “You should definitely be wearing a 36C.”

I laugh again. In the few times I have met this woman, I have come to realize that she is stubborn, a perfectionist, and, frankly, kind of a bitch. I view my surgery as a life-changing event- it lifted a physical and emotional burden I had been carrying around for years, gave me a renewed sense of self-confidence, and relieved soreness and pain in my neck and back which had been affecting me in more ways than I even knew at the time. Shopping became less discouraging, working out less difficult, walking down the street in a sundress less stressful. Her job as a plastic surgeon, in my eyes, is to emphasize our flaws, to promise instant gratification through nips and tucks and augmentations. Fat? She can fix that. Sagging skin? No more. She makes her living selling youth and confidence, for a pretty, pretty penny.

She takes her pictures, sighing to herself the whole time, and sends a nurse in to inject a steroid into my scars, which might flatten them out a bit. After 3 of these treatments, I can try laser scar surgery to lighten the pink color to a flesh color. She highly recommends it. I agree to the injections because the scars annoy me, a little. When I realized they weren’t fading as fast as the other scars, I got upset. I traded too-big breasts for scarred ones. I was still embarrassed about taking off my bra, but for a different reason. I obsessed and anticipated the grossed-out face my first post-surgery exploit would make when he saw my imperfect nipple. I imagined him asking about it. (This didn’t happen. My boyfriend thinks my breasts are beautiful and perfect, though he laments not having seen the “old ones.” People compliment my breasts on a daily basis, tell me I’m lucky they’re big, and I say “if you think this is big……)

The moral of the story? I highly advocate breast reduction surgery for the woman who has endured back and neck pain, who feels overpowered by breasts too big for her frame, who can’t stand one more person ignoring her eyes and speaking to her bust, one more assumption about her sexuality, one more shopping trip resulting in tears. I also highly advocate taking everything a plastic surgeon says with a big grain of salt, since they make their living by praying on our insecurities and our society’s obsession with completely unrealistic photoshopped celebrity bodies. Here I am, today, in a $12 bra (clearance at Marshalls last week) whose brand I can’t remember. It’s a 34D. Hello, body confidence. 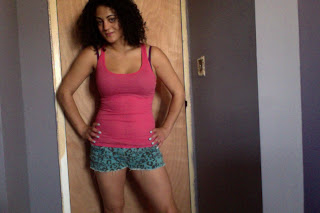 Here I am a couple weeks ago in a Victoria’s Secret bandeau bikini. The top is a large. It falls down when I swim in the ocean. It falls down when I move around a lot. It’s a “sunbathing” suit. I am not really a fan of VS, to be honest. Their bras don’t offer enough coverage or support, because even post-reduction, I still have a “full” round cupful, and I am consistently disappointed with the narrow, not-enough-space feeling of their products. 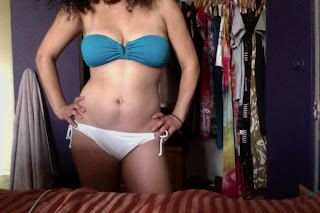