There’s a stretch of Broadway here In New York (between Canal and Houston Streets) that’s full of really cheap (in price and quality) clothing stores. I love shopping in these places because I always end up finding something unexpectedly great, like shockingly flattering high-waisted sailor shortsâ€¦and normal things like inexpensive, simple jersey dresses. But you’ll also find hilariously insane things, like skintight tribal-print spandex minidresses, leggings in every pattern and color combination imaginable, and neon bandage dresses with asymmetrical cutouts.

The best crazy thing I found this past weekend was a black minidress with cutouts and bra cups covered every inch in silver spikes. It was amazing. I had to sneak a photo with my phone: 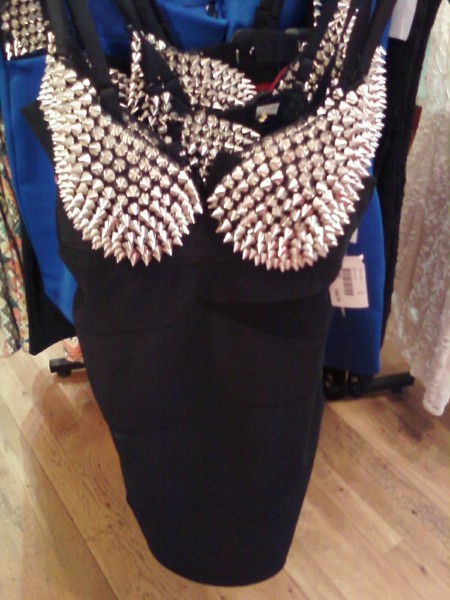 Then as I ventured further into the store, I found just the bra alone covered in spikes. Ridiculous! 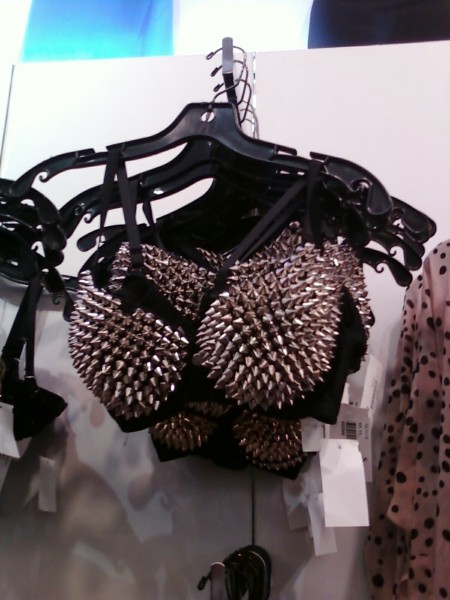 Of course, they only came in small, medium, large, which looked to be about a 34B give or take a band size for the small and large. But what it really got me thinking about was breasts as weapons. These spiky garments look dangerous!

Figuratively and literally, breasts hold a lot of power. Whether that’s deserved or not, I’m not really sure. Figuratively, exposed breasts have been used as tools of protest for freedom fighters (like Wangari Maathai, a Kenyan activist who’s known for stripping naked at protests, and inciting other women to do the same), and members of the recent SlutWalk movement, among others.

There are also lots of images of breasts as literal weapons in pop culture. Gun boobs have by now become a common trope. See Lady Gaga’s 2010 Rolling Stone cover in which she wore a bra made of machine guns: 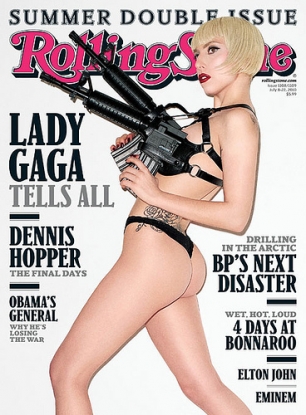 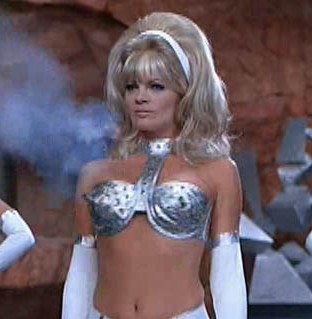 I often think of a cleavage-baring outfit and heels as “armor” and feel that I can command more attention if my breasts are on display to a certain degree (flashing a little cleave or wearing a really tight top, not actually going topless), especially in an arena where there are few other women, like comic book conventions and such. In fact, for an upcoming fundraiser being held by the amateur comics collective with which I volunteer editorial services, I offered to wear a skimpy top and serve as bartender at the event under the assumption that it’ll bring in more tips than any of the guys could.

But seeing breasts as weapons also has a downside. Even when they’re harmless, like being visible in a piece of fine art, or being used for their biological purpose of feeding an infant, people often treat them as immoral or disgusting. It seems like there’s always some new controversy over breast-feeding (like last month’s stir over a photo of two mothers doing so in their military uniforms).

It stills makes my blood boil when I remember former attorney general John Ashcroft placing a curtain in front of the breast-baring Spirit of Justice statue in the U.S. Justice Building in 2002. And in most states, women can be arrested for indecent exposure for going topless in public (New York City excepted, of course).

Breasts can also be a weapon against our own bodies, as with breast cancer or the back problems that arise from having an extremely large pair.

So what are our breasts? And why is there such a duality foisted upon women’s bodies, but not men’s? They have nipples too! But a microsecond of a woman’s nip slip on network television results in thousands of dollars in fines. Our breasts are life-giving but disgusting; dangerous but powerful; pornographic but symbolic. It’s exhausting!

I like the power my breasts wield, but I think I would give it up if it meant I could have real bodily autonomy.

2 Comments on Off the Rack ~ Breasts as Weapons