I told you about Va Bien right after the Oscars, and now that wedding season is almost upon us, it’s time to review the Va Bien Ultra Lift Bustier Style 1503 that I wore last week.  Truth be told, I really should have chosen the Ultra Lift Strapless Style 1506 because  it goes up to an I cup and is one of the top 12 best-selling bras of all time on the Bare Necessities website.  But I really, really, really wanted to try a longline.

As I mentioned after the Oscars, I wanted to see how the Va Bien bustier would treat my back flab, and I was intrigued by the claim that it would shape me, not just contain me. So I spent six hours in the Va Bien bustier one day and six hours in my Spanx bodysuit the next. Each day I wore a 14L Campbell & Kate shirt. I realize that a normal full-busted woman would only wear a bustier under a special occasion dress, but I really, really, really wanted to see how it would work under my shirt, especially since my 14L shirt is slightly snug on me.

Here are the results from the side (at the end of each day). Va Bien is on the left; Spanx is on the right. 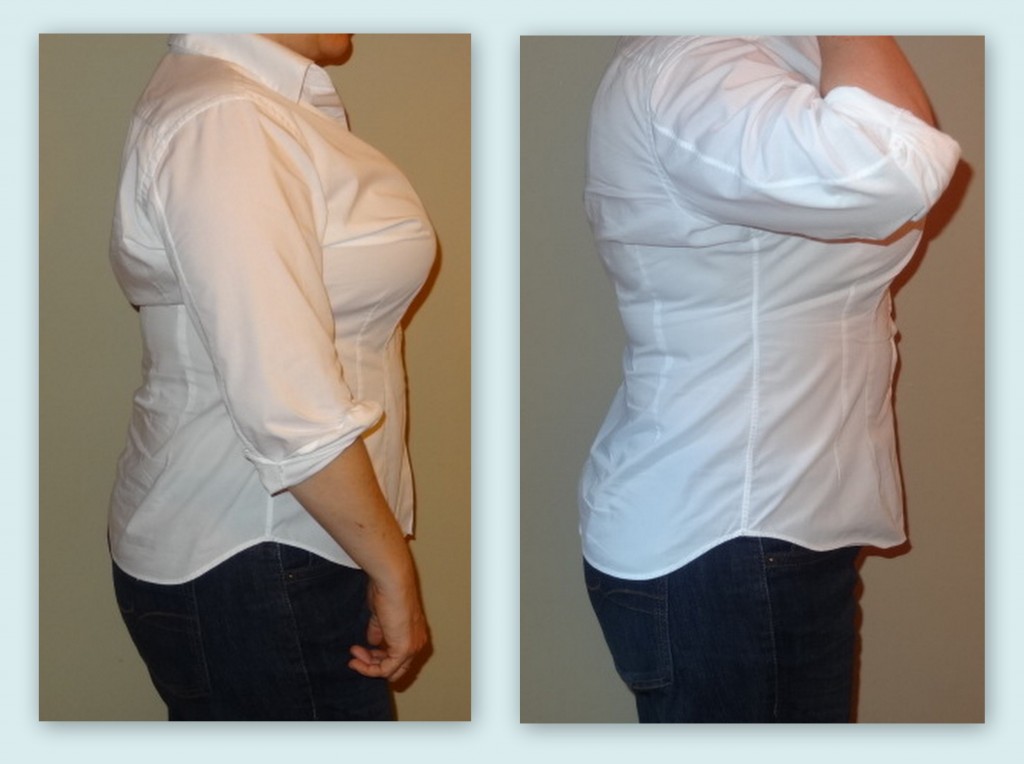 My finding? The Va Bien Ultra Lift Bustier definitely smoothed out the flab rolls in the middle of my back more than the Spanx bodysuit. However, I also learned that a longline strapless bustier is not interchangeable with a straightforward longline bra because of the issue of the flesh under the arms. In the Va Bien photo below on the left, notice the bulge of flesh in the upper third of my torso. You don’t see this in the Spanx bodysuit on the right because the bodysuit uses a leotard back.

Here you can see the difference between the backs in the Va Bien Ultra Lift Bustier on the left and the Va Bien Bodysuit Style 701 on the right. (Interestingly, the Freya Edina longline doesn’t use a leotard back either. For those of you who have worn Freya longlines, how have you found this?) 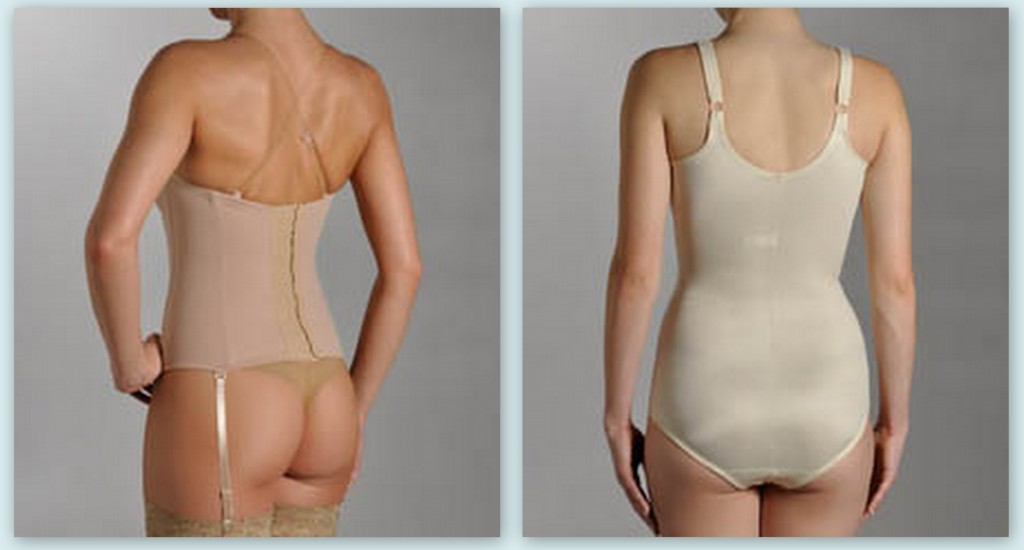 Finally, here’s a look at the front. Again, the Va Bien bustier is on the left and the Spanx bodysuit on the right. 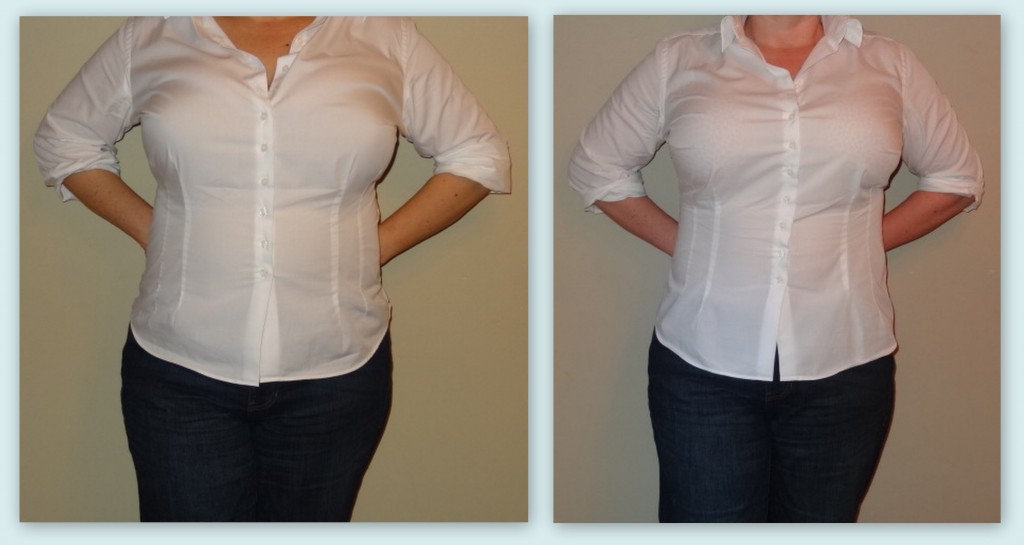 Sadly, I didn’t get the hoped-for hourglass cinched waist look from the cut and sew bustier. And even though the Spanx bodysuit always cuts into the flesh beneath my underarms, it was otherwise much more comfortable than the bustier.  It’s not like I need any more persuasion that this bustier is not meant for everyday wear, but if it had given me a cinched waist, I would definitely be tempted to wear it more often.

I chose to wear the bustier in size 36F, but I wonder if the 38F would have shaped my waist more? According to the Va Bien blog, it’s counter-intuitive, but you actually get more bulges by squeezing into a size down. However, after wearing the bustier for 6 hours, I actually felt that it had stretched out enough for me to go to a tighter column of hooks. So it’s hard to say the effect without actually trying the larger size.

As for bra size, neither the 38F nor the 36F were large enough for my 34H breasts, so trying to sister-size across two band sizes didn’t make a difference for me. I’m pretty sure I could have played with my BringItUp adhesives to reduce the quadraboob, but I totally messed up the BringItUp instructions on my last pair of the adhesives. So that day, I was one of those pitiable women we see bouncing around in the wrong bra size and yearn to point in the direction of a good fitter.

Strangely, however, I was not annoyed by the bouncing, and I credit the amazing “Ultra Lift” feature of the bra cups for this. Yes, there was some rippling where the center top of my breasts spilled out a bit, but I felt extremely secure as I took the subway to meet my friends for dinner.

There is also an east/west thing going on with the shape of the cups, but it seemed to work out fine underneath my shirt. In the photo above, I think my bust looks only slightly larger in the Va Bien than it does in the Wacoal Alluring bra that I’m wearing under the Spanx bodysuit.

Overall, I’m impressed with the Va Bien bustier–especially the “Ultra Lift” aspect–and I can tell that I will really like the Va Bien Ultra Lift strapless when I need one.  As for bustiers and bodysuits, I’ll keep on the lookout for something in the G+ range.

Are YOU ready to give Va Bien a try? I’m super excited that this company has something for almost everyone, and they are offering three lucky winners their choice of any Va Bien product. If you’d like to be one of the lucky three, here’s how to enter:

It’s that easy! But I do have another way for you to have more entries. Look for it in my next post!

12 Comments on D Cup and Up Strapless, Bustier & Bodysuit Options: A Va Bien Review and Giveaway