This week, I got my hands on two different books about bras. I discovered Jene Luciani’s The Bra Book: The Fashion Formula to Finding the Perfect Bra through the unlikely source of the Bravo television show “Mad Fashion.” Chris March (best known for his stint on Project Runway season 4) designed a dress for her made almost entirely out of bras, for her to wear to an event celebrating her book. The dress was fabulous of course, but I was more intrigued by the book. 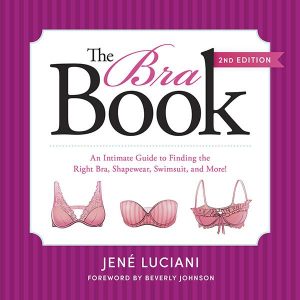 Then Darlene suggested I also check out the Ali Cudby (“Amerca’s #1 Bra Coach”) title, Busted! The Fab Foundations Guide to Bras that Fit, Flatter, and Feel Fantastic. Fab Foundations is Ali’s website (and blog, and Twitter, and publications…) devoted to teaching women how to find their perfect bra. 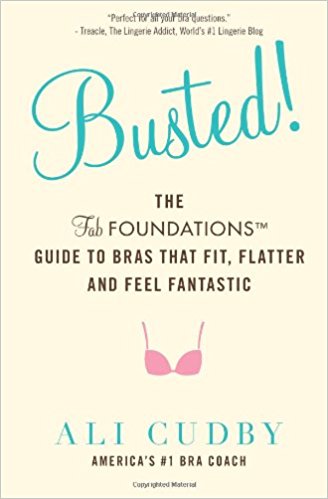 Between the two, Busted! definitely has a more educational tone. Though readers who’ve long been part of the big-busted online community probably won’t learn anything they don’t already know, it’s got to be the best bra-fitting resource in the published realm. I think it should be mandatory reading (for girls, anyways) in high school sex ed classes. If I had had this book when I was a teen, it would have saved me a lot of annoyance. This book could also serve as a great jumping off point for mothers taking their daughters on early bra-shopping expeditions.

As for the nitty gritty, Busted! is written in a refreshingly straightforward tone that keeps the cheerleadering to a minimum. It’s also full of useful, easily digestible info, like a glossary and multiple sizing guides based on brands and different body measurements. The one I will definitely be photocopying and saving forever is a chart listing approximate cup sizes based on the difference between bust and band measurement across over three dozen manufacturers. While I find the difference-measuring part less than helpful, the comparison of all the brands is immeasurably useful! When you buy all your bras online, it can be hard to know what size to order from which brand, especially when you start considering brands from different countries, which use different scales. How do you even know which country your selected manufacturer is from?? So this chart is fantastic. (If you want to print one yourself, you can find it at fabfoundations.com/busted.)

As for The Bra Book, this one was more of a fun read than a truly educational resource. While it includes basic fitting instructions, it also features chapters on bra history, bras and men, and the “future of bras.” It’s a really cute book, full of fun illustrations and the color pink, and is perhaps more appropriate for younger readers than Busted! would be.

However, there are some incorrect statements in the book with regards to fitting instructions. For example, for the problems “underwire isn’t flush with your ribcage” and “the bridge of the bra doesn’t lie flat against your body,” the solution is that you need a bigger band or cup. But this is wrong! If the wire or bridge aren’t flush with your body, it usually indicates that you’re wearing a band that’s too big. Further, one page after the explanation that bra cup size varies based on band size (i.e. 34A is the same cup volume as 32B as 30C, etc), there is a statement highlighted in a pink box that says the secret to a strapless bra is to go down a band size—and then it states “If you are a 34B you would purchase a 32B.” Wrong! You would purchase a 32C. Later, it states that you should fit your bra band on the middle hook when you first purchase it. Wrong again! It’s generally accepted logic that you should choose the loosest hook, because the band is going to stretch out over the course of its life.

Lastly, there’s a lot of “should” advice, like types of bras that large- and small-busted women should avoid, as well as an entire chapter on bra “faux pas,” which includes such things as visible bra straps and going braless. The going braless faux pas, especially, reads as judgmental. Women shouldn’t be shamed into wearing a bra if they’re simply more comfortable without. Busted!, on the other hand, avoids hard and fast rules, and repeats over and over that every woman is different and may have different requirements based on her personal preferences, not based on her bust size. (Though I also have to note that Busted! repeatedly references Fab Foundations, to excess. At times, it seems like one giant press release for the website.)

Overall, I really enjoyed both these books, but anyone who’s already aware that cup size varies based on band, has been professionally fitted a few times, and/or reads any of the myriad big- and small-busted blogs out there probably won’t learn anything new. But they’re both fabulous resources for newcomers. I hope enough women in the U.S. read these, because the only way mainstream American bra manufacturers will ever vary their sizes is if consumers demand it. But they can only demand what they’re aware of!

Review copies of both books were provided by the publisher.

5 Comments on Off The Rack ~ Bra Books Reviewed