In Darlene’s post last week, “Pretty Bras for Big Breasts: Oh So Many!” she asked for responses from people who’ve tried Ultimo brand bras. One commenter noted that she loves them, but when I tried one earlier this year during a Figleaves.com sale, I came away highly disappointed.

The particular model I bought was the Miracle D-G Plunge Bra. It looks very similar to the Victoria’s Secret Body by Victoria Full-Coverage Push-up Bra, which they no longer make but used to be my favorite bra before I realized I wasn’t wearing the right size. In fact, I liked it so much that I altered the band and continued to wear it, to the point that the band has by now completely worn out (look for “replacing an old bra band” instructions in a future post). I’ve been looking for a suitable replacement ever since Vicky’s discontinued this particular model when they reformulated the Body by Victoria line a few years ago. 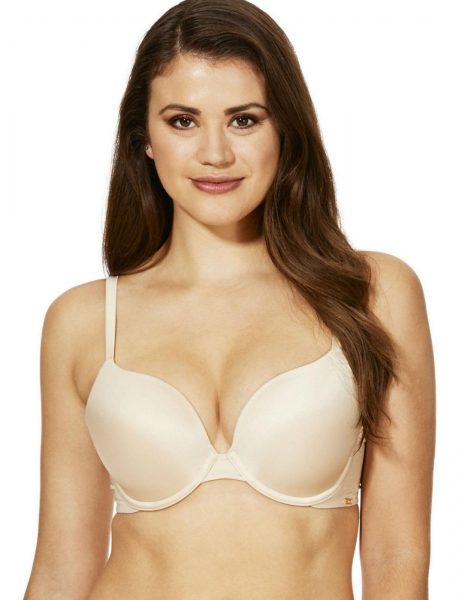 In addition to its VS similarity, I was also extremely excited to see that this bra is 23% cotton. Cotton! That’s another thing I used to buy from VS that I can’t find in my real size—cotton bras. Why don’t any DD+ brands make cotton, or even partially cotton, bras? And another thing this model appeared to fulfill that I can’t seem to find, are straps that attach more toward the center of the cup instead of way out to the side, practically in your armpit; and that gradually lead to the cup instead of just being tacked on (which, in my experience, helps alleviate side-boob/armpit cleavage). Again, why don’t any DD+ brands make bras in this shape?

So I ordered a 30F instead of my usual 28FF, since Ultimo doesn’t make 28 bands. When the bra arrived in the mail, I was immediately pleased. The straps weren’t too far apart, which is an all too common problem for my apparently narrow shoulders. And the band looked really sturdy; it was the same opaque fabric as the cups, leading me to believe that it would last a bit longer than your typical mesh band. The cotton element was actually just the cup lining, but that’s still a comfort improvement. However, the cups were extremely thick and stiff. Not even close to your average push-up or padded bra—this thing is like armor!

If the cups aren’t the exact size and shape of your breasts, this bra will not work. Of course, I couldn’t even tell if the cups were the right shape since I was spilling out the top and sides! The cups were hopelessly tiny. Still, the band felt tighter than your average 30 and the fabric felt so nice and smooth that I tried exchanging for a 30G.

Unfortunately, the bra still didn’t fit. Even though it was the same 30 band, the replacement bra felt significantly looser. And the cups were very shallow all over. It seemed like it was suited for breasts that have a very large circumference but little depth (which is definitely not my shape). Because the cups were so shallow on me, the underwires were forced way down my ribs, and then I had horrible quad-boob because the remaining cup space wasn’t enough volume. The too-big band and unforgiving, inflexible cup fabrication were a combination from hell.

Eight months later, and I’m still disappointed that this bra didn’t fit right. It taunts me every time Figleaves.com has a sale. Anyone out there know of any bras that look similar in style, but with narrow-diameter wires and deeper, more flexible cups?

5 Comments on Off The Rack ~ Ultimo Bras are Ultimately Disappointing