I told you I’d report on what I decided to wear to the Association of Image Consultants International convention.  I’ll do even more and tell you about some of the amazing women I met and what I learned. 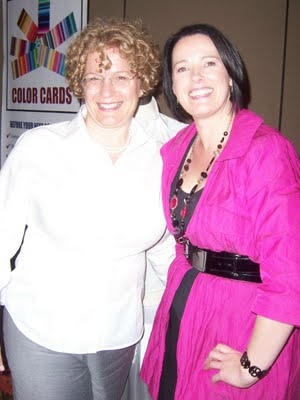 On Friday night, I wore my Campbell & Kate shirt, grey Doncaster pants, pearls and a red cardigan.  Without the cardigan, I faded away next to Imogen Lamport, the author of Insideoutstyleblog, and a 34G. I idolize Imogen and have linked to her on my blog several times, so you can imagine how excited I was to meet her in person.  Here’s what I learned from her in the short time that we spoke:

You should check out her guest post on Youlookfab today–all about how to dress a full bust!

I also met her friend from New Zealand, the famous Jan Fisher, who Imogen features quite a lot on her blog.  Jan is an example of someone in her sixties who doesn’t look old.  I have a lot more to write about this later.  There have been many times when I’ve given up on my appearance because I thought I was just too difficult to dress.  This convention was filled with women who showed me otherwise. 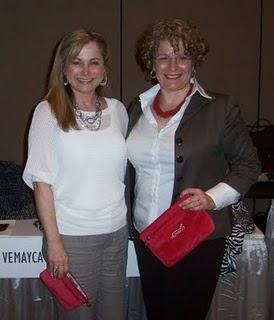 On Saturday, I wore my Campbell & Kate shirt with a coral necklace, Jones New York jacket and $13 pants that I found at the Burlington Coat Factory in Fort Lauderdale.  Thank goodness I didn’t tuck my shirt in because at the end of the day I discovered my zipper had broken!  In this picture, I’m standing with Veronica Mayo, the creator of the Vemayca cosmetic bag.  Once she explained its features to me, I had to own one:  removable, washable lining and pockets that can hold things like glasses, business cards or phone.  Veronica only allows herself to carry three things in her purse–her cosmetics bag, her wallet, and one other item.  I’m not down to three items yet (I have to have my Moleskine pocket organizer for receipts and my little Jill Bliss notebook to jot down inspirations), but I already feel more streamlined and organized with this new cosmetic bag.

I’ve got to run for now, but look for more thoughts from the conference and other things I learned over this past refreshing week in Florida soon!

2 Comments on Tales from the AICI Convention