[See yesterday’s post if you’d like a chance to win a copy of Janie Bryant’s book, The Style Files.]

Regarding the Mad Men characters that she dresses, Janie Bryant says, “My job is to make sure that these women never blend in or get eclipsed by another character.” Wouldn’t you love to have someone whose only job is to make sure you always look your best?  Not only that, but she has a fitter-cutter who knows every nuance of each actress’s body.

So when Christina Hendricks says of her first fitting with Janie, “somehow, miraculously, every single piece on the rack fit me,” I wondered why she should be surprised.  It turns out that not every costumer pays attention*.  According to Hendricks, “Janie had my measurements, like every costumer I’ve ever worked with, but she actually paid attention to it and got my body type right, too.  It was a pretty wonderful experience.”

Unfortunately, if you look in this book for more particular advice for our body type, you’ll be disappointed.  Basically, Bryant includes the same-old-same-old about wearing the right bra and a few rules for the curvy hourglass shape (with a couple of surprises that I’ll share later in the week).  She repeats several times that Joan’s character is all about power, strength and confidence, expressed through jewel tones and curve-hugging sweaters, pencil skirts and sheaths.

But what if you have our body type and want to be a different character than Joan Holloway?  Hendricks says that “walking into boutiques and trying to buy a dress that makes me look like Christina and not Joan has become far more difficult in the past couple of years” due to Mad Men‘s influence on fashion.  Hendricks’ own style “is a little romance and a little rock and roll.”  From Bryant, she’s learned always to feature her waistline and how to wear romantic pieces in a tailored way.  But that’s it for hourglass-specific advice.

Of course, there’s not much specific advice for any other shape either. This book is about broad concepts that you can adapt to your own situation, and Bryant’s ideas are actually making getting dressed fun again for me! It’s about playing dress up.

Take a moment to think about how you would like to be perceived and what you would like to achieve today.  Is it important that you look “powerful” and “capable” for a presentation?  Or do you need to reveal a “sexy” and “softer” side for a first date?  With a few words and an intention, you now have a direction–a purpose, even–when you gaze out at those vast choices in your closet.  Again, who do you want to be today?  Commit to a character.  Now you won’t waste time debating between the metallic bolero jacket and the houndstooth blazer.  Or look down at your ballet flats during a board meeting and think, “Damn, I should have worn the power heels.”

I actually tried this approach yesterday.  Read how it worked out after the jump.
I needed to visit a tailor in Manhattan and for some reason, I wanted to dress “Upper Eastside”.  For those of you who are familiar with New York City, busty is not something that you equate with those tiny, blonde “ladies who lunch” who take taxis home to doormen buildings.  But my only other choice was “harried office worker on a lunch break”, and I wasn’t in the mood for that.  So I kept thinking about it.  I don’t even own a pair of khakis, which for some reason seems like part of the Upper Eastside uniform to me.  But I do have another part of the uniform–a classic white button-down shirt.  So from there, I came up with this. 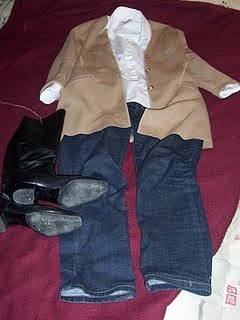 I felt great in it.  So it looks like it’s all about choosing a character and working with what you have to dress that way.  Hendricks talks about doing the same thing at the end of Bryant’s book:

Sometimes I have to inspire myself by creating a theme.  I went to a birthday party the other night and I was like, “I don’t want to go out.  I don’t even want to look at my clothes.”  So I decided to get myself excited by dressing like a French jewel thief.  I was being funny, but it also inspired me to create a look.  I went for all black.  I wore a cowl-neck coat with a beret and long gloves.  Doesn’t that sound like the perfect outfit for a French jewel thief?

Given a choice between “hide me,” “see me” or “look at me” (the three attitudes I wrote about here), I think you can tell that Janie Bryant would tell you to choose “look at me”.  What I think is helpful about her character approach is that you can still hide a little if you’re feeling shy.  You can say, “Look at my character” instead of just “Look at me.”

Have you ever taken this approach?

*The idea that not everyone pays attention reminds me of Lisa Wexler’s story here.  I’m still dying to find a stylist who has experience working with busty women.  If you know someone, please share.

5 Comments on Janie Bryant: Decide Who You Want to Be Today