This is the back of an eye-catching dress worn at an event I attended in Brooklyn last week. 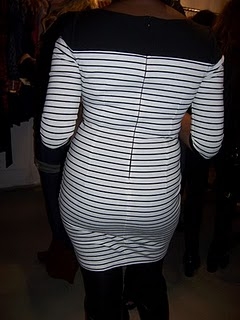 And this is the front, after I met its wearer.

We’ve looked at stripes before, but the solid on top is new.Â  It draws the eyes up to the shoulders.Â  This is a size Large from Zara.Â  Its owner finds Zara to be better quality than H&M, which has worse fabric in the United States than it does overseas.Â  For proof, she’s owned this dress for two seasons without it pilling.

Guess which bra size and brand she’s wearing underneath this dress, and see if you’re correct after the jump.
She told me that she wears a 34/36D and loves the seamless Victoria’s Secret sensory foam bras.Â  Her reason?Â  No skin bulges.Â  I admit, her back looks great.Â  But Victoria’s Secret?Â  Maybe I’m just imagining things because I have such a bias against VS, but I think a different bra would give her better lift.Â  Do you agree?Â  I also don’t think there’s any way she’s a 36.

4 Comments on November 10 Curve Cam: More Stripes on the Horizon!