I.  Do or Don’t Sweat the Small Stuff?

Do you listen to the advice, “Don’t sweat the small stuff” (mentioned at the end of my October 28 post)?  It came up again when I visited Fran and her closet.  Fran left her old job on September 30 and began at her new company on October 1.  Given the economy, Fran was happy to be making 85% of her numbers at her previous company.  The only person who made 100% was a micro-manager who drove everyone crazy, worked around the clock, and couldn’t be available for her husband and two sons. After speaking admiringly about this co-worker one afternoon, Fran’s boss asked her, “Do you go to sleep at night wondering how you’re going to make your numbers?”

Fran’s answer:  “I go to sleep wondering about how my daughter will succeed as she grows up.”  Sometimes we’re lucky to be able to concentrate on the small stuff.  Other times, we let it distract us from what really matters.

After the jump, breast reductions and Halloween . . .

II.  Do or Don’t Get a Breast Reduction?

I’m taking a fascinating class about fabric at FIT for the next few Saturdays.  This past Saturday, the 76-year-old instructor explained that when you iron a pleat into cotton, it will eventually fall out.  On the other hand, pleats can be molded into polyester so that they will always stay in.  “This is why,” he said, “all bras are now molded cups, versus sewn, unless someone is very large-busted.”

Of course I had to ask what he considers large-busted.  “Bras are molded up to a D cup.  DD’s go to an expensive corsetier or get a reduction.”  He said that his own granddaughter had just gotten a reduction and is now “happy as a pig in slop” because she’d been extremely self-conscious before.

So now of course I had to ask him about his granddaughter during the break.  It turns out she’s a 20 year old college student.  She was a 34DD and is now a 34B.  A 34DD isn’t that big to begin with (“She wasn’t grotesque!” her grandfather insisted), but don’t you also think that 20 is a little too young for such an operation?  So many of us who struggled with our size in our early 20’s are later thankful for what we have.  With just a few more years, the angst of adolescence would have been behind her and she could have begun to appreciate what she had.

On the other hand, I overheard an elderly woman come into the Town Shop for a fitting a few weeks ago.  She’d just had a reduction and was ready to wear bras again.  She was stooped over, and even with the reduction, it seemed like her boobs were sagging down to her waist.  In this case, it seemed like she may have waited too long for the operation.  If I ever got a reduction, I’d want it to be while I was still young enough to wear all those cute clothes that only cover the tiniest, least supportive bra possible.  I’d want it while I had the figure to wear a backless gown.

On a related note, I just found this interesting post on the topic of reduction etiquette over at Jezebel.

III.  Do or Don’t Dress Sexy for Halloween?

Halloween is long past, but I’ve been thinking about this topic for a while.  Of the holiday, Anina over at Brazen Lingerie recently tweeted, “Why do you need an excuse to dress sexy?”  while another blogger wrote a post titled, “Halloween, Not an Excuse to Dress Skimpy”.  Repressed person that I am, I almost always need an excuse to dress sexy, which is what I love about Halloween.  It’s like the shy person who comes out of her shell when she’s acting.  Playing dress-up lets you be someone different from your day-to-day life.  I’ve never actually dressed sexy for Halloween, but I like having the option.  That being said, sometimes it’s the most confident people who wear the funnest costumes that have nothing to do with sexuality.  I thought of this when Carissa tweeted this Halloween picture of her and her husband (she said I could share).  Doesn’t it make you smile? 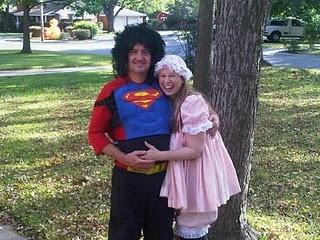