Iris was, as usual, a genius at finding what worked best. Before I disclose Shelly’s size after the jump, see if you can guess from the clues below.

1. As I tweeted earlier, Victoria’s Secret put Shelly in a 38C. It was an adorable blue and white polka dot 38C, but it did nothing for her figure. The VS bra is on the left. 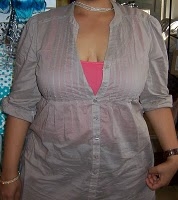 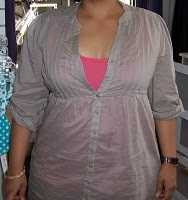 2. Iris put Shelly in a seamed Chantelle (on the right). Iris insisted that seamed was the best option for Shelly–that’s the next clue for you. (I think Shelly also looks pretty good in the Prima Donna Satin below–but that’s not a clue. I continue to resist seamed bras. Iris said she’d like to put me in the Prima Dona Menton. Has anyone tried it?) 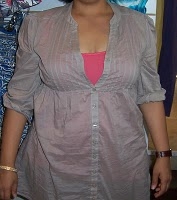 3. Shelly has always nodded so knowingly when I’ve explained the type of shirt I’m creating. But I couldn’t tell if it was just a bad bra causing her to relate, or if she was a D cup or higher. Here’s your next clue: she can relate because she’s a D cup or higher. On Friday, she told me about a meeting she once attended in India where the speaker stopped everything and said to her in front of everyone, “Would you button your shirt? It’s distracting everyone.” She hadn’t even realized that one of her buttons had popped open. Can anyone top that horror story???

Okay, drum roll please . . . . and continue after the jump to see if you guessed Shelly’s correct size. (One more hint: I didn’t.)

Shelly wears a 34DD/E. Congratulations, JJ, for being the first one to guess correctly!

Interestingly, Shelly considers herself to have a pear shape because she has wide hips. However, with her new bra size in mind, she may want to play up the hourglass aspects of her figure!