Last night I wrote about dresses I wish I could wear. Today, read about a dress that Amy Wine had to wear . . . because bridesmaid dresses are what good friends do for each other. See the pictures after the jump to decide whether the pain was worth it.

It was a beautiful August day, and my dear friend Katie had whisked me out for an impromptu lunch at the delicious (but pricey) Rosa Mexicano. It was the first time I was seeing her gorgeous engagement ring, and we spent an amazing lunch sipping fancy margaritas and nibbling on a little bit of everything . . . a lovely treat! Until the bill came. Katie whipped her credit card out before I could even reach for my purse, a sneaky move . . . .

I launched into subversive battle tactics, distracting her with questions as I unsuccessfully tried to slip some money into her purse from across the table.

“Shouldn’t you be saving for a house?” I teased.

She flashed me her best Miss America smile.  “Shouldn’t you be saving for a bridesmaid dress?”

Cue the music from the shower scene of Psycho. I was trapped.

We’ve been friends forever . . . we grew up in the same town, attended the same middle and high schools. Katie was one of the first girls in our grade to grow breasts. I remember begging to know her secret, circa 6th grade. A deeply religious girl, she had suggested I pray. And pray I did.

Fast forward to August, 2009. Height: 5’4″ Pants: 6 Bust: 34F (really a 32G in denial). I swore it was a case of “Be careful what you wish pray for,” but my grandmother and great aunts say the late-blooming boob gene skipped a generation and landed on me. 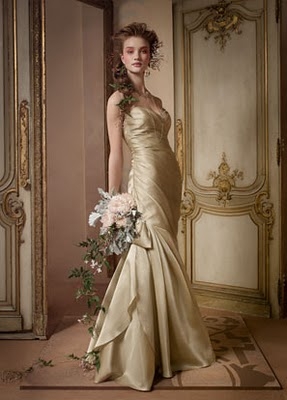 This beautiful number was backless AND strapless–my own personal hell. With no hope of hiding my strapless bra inside (Fantasie of England makes this amazing anti-gravity dream) and a botched tailoring job which ruled out sewing in cups with underwire, I took a trip to the hardware store the morning of the wedding and bought myself a roll of duct tape.

The good news: I was able to construct an amazing strapless, with cups literally molded to my shape, which held up all night and made for great reception banter. The bad news: By the end of the night, I was almost too nauseous to stand from the combination of dancing and inhaling duct tape adhesive fumes. I ripped it off without getting a picture of my creation, but I still have a couple of scars on my back from where my skin tore off with the tape. 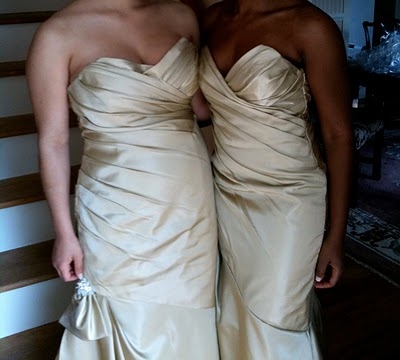 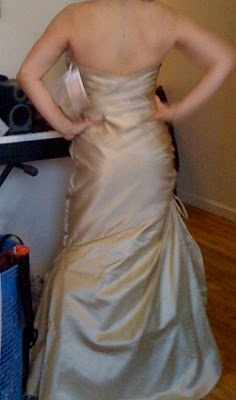 Personally, I think it was worth it. Amy looks gorgeous in this dress, and it’s great to know that there’s always duct tape when all else fails. (The Wall Street Journal recently had an article about a woman who won a scholarship for constructing her prom dress out of duct tape!) However, since Amy’s only 23 and has a lot of bridesmaid service ahead of her, she may want to invest in an altered corset the next time around. (Wouldn’t it be fabulous if they did half muslins for bridesmaid dresses, like they did for Sadie’s wedding dress?)