After a networking breakfast yesterday, I spoke to two women about my shirts. At first glance, I thought one might be a future customer but decided she wasn’t large enough. Sure enough, when I asked her size, she was a 38B. I patted myself on the back for developing such an eye. The next woman I knew was only being polite to talk to me. There was no way she would be interested in my shirts for herself. But guess what? She was a 36DD.

It’s the same thing with clothes on a hanger. Sometimes you just can’t tell until you try something on. I went on a white shirt rampage at Bloomingdale’s after meeting with my logo designer Wednesday. Here’s a Natorious shirt as I found it on the hanger. 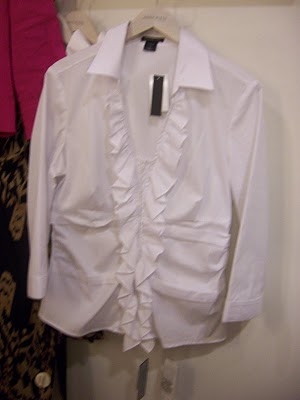 See me wearing it after the jump. 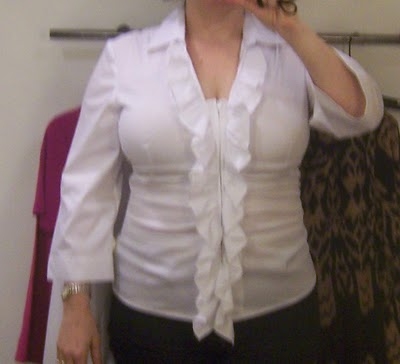 Not at all the baggy, matronly thing I expected! I didn’t buy it because it was too expensive for the limited wear I would get out of it (with so much cleavage), but I was happy to be surprised.