Sometimes I scoff at the price set for a simple garment in a department store. If the pattern is uncomplicated, the fabric average and the garment is made overseas, then it didn’t cost very much to make. I’m inclined to wait for a sale rather than pay the full retailer’s markup.

On the other hand, sometimes I encounter a garment worth every penny charged. This is the case with the $750 Bluesuits jacket by Jamak Khazra that I wore Thursday night. 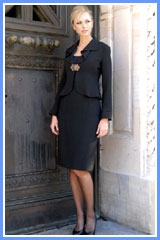 Here’s a picture of the same jacket in purple that I’m going to buy someday. I’ve wanted a purple jacket like this ever since Rachel Greenwald, the author of Find a Husband after 35*, wore a cropped purple jacket to speak at the 92nd Street Y in 2003. 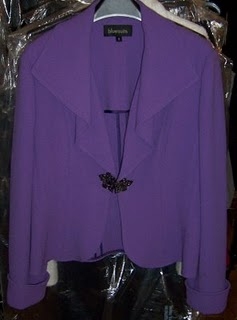 You can’t tell by looking at it, but this jacket has 12 panels,and each of its 21 open seams is finished in a taffeta bias binding. When a jacket is lined, all inside seams are simply merrowed because they are hidden. Unlined jackets are finished (from lowest to highest) in merrow, closed seams or French seams. An open seam with bias is usually found only in couture garments costing over $3000. The fabric, an Italian wool crepe, is slightly stretchy and is wearable for three season of the year. 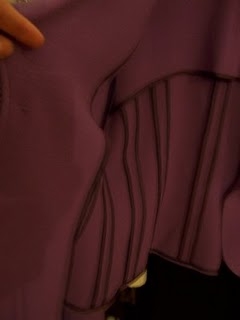 Every woman who tried it on at last night’s event looked great in it. It’s the perfect blend of feminine and powerful.

Two days ago, I heard Sydney Barrows, the “Mayflower Madam”, speak at an entrepreneur’s event. She said to ask ourselves, “What is the business that your customers want you to be in?” It’s not about what you want to sell but about what your customers want you to sell. After hearing Jamak speak on last night’s panel, I realized that’s exactly the question she asks herself. Jamak puts herself in her customer’s place and understands that a businesswoman isn’t looking for a fad like “bubble sleeves,” but for quality and presence.

This is why her $265 pants are worth it. Jamak combines important details like a flat front and a mid-rise waistband. The latter gives a woman a longer torso but still contains her stomach. Jamak won’t put pockets on the sides because they add to an hour-glass or pear-shaped woman’s hips; instead, she favors horizontal pockets in the front that have shallow pocket bags. (If you’re like me, you love big pockets for keys, but Jamak explained that large pocket bags work best under a pleated front.) She uses an all season European tropical wool stretch that does not wrinkle and a Lycra-free pant lining that moves with the body, making the pants perfect for long hours of sitting at a desk or on an airplane. Until I tried on the Bluesuits pants, I thought a pair of pants was just a pair of pants. The experience has made me much more discerning.

Sydney Barrows also said in her presentation that “if there’s nothing special about you, you’re just a commodity, and people only choose commodities based on price.” I know that’s true in my shopping. If there’s nothing to distinguish between two items that I’m considering, I’ll choose the less expensive one. On the other hand, where a designer has paid attention to what really makes me look good and has invested in quality details, I want her product. Jamak’s clothing is worth full price.

*After her talk, I ran out and bought the book. I didn’t use it right away, but it gave me the courage to sign up for eHarmony in 2005, and voila! I met Mr. Campbell.