I love the look and feel of a crisp white cotton shirt, but it’s been a long time since one that fit my bustline also fit my shoulders perfectly. Carissa Brown of Bratique Helene has made this and many other good things happen in her new line of woven shirts. For example, in addition to fitted shoulders, there’s no gapping or pulling at the bustline. 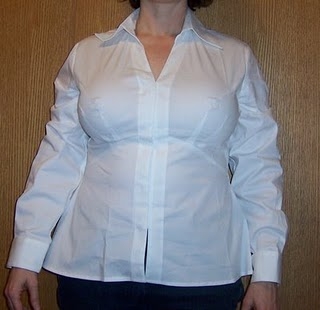 She credits the hook-and-eye closures for this, but I wonder if even buttons could work with this shirt. Initially, I found the hooks and eyes awkward, but they’ve become easier with each wearing, and I appreciate the detailed workmanship behind them. 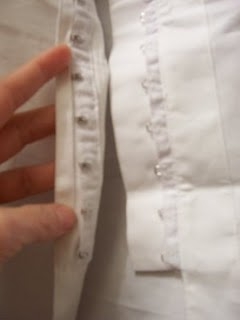 Another good feature of Carissa’s shirts is that they avoid the Hanging Tent Syndrome that I criticized in the Shoshanna dress, in which fabric falling from the bustline hides the waist entirely. As you can see in the picture below, there also isn’t a lot of extra fabric cluttering the stomach area. This was one of my main criticisms of Bravissimo and Rebecca & Drew. 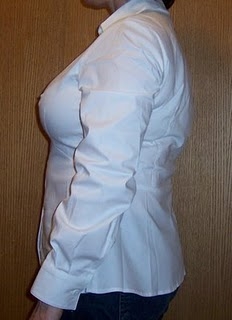 These before and after pictures from Carissa’s own blog really show the difference it makes to get rid of extra fabric. 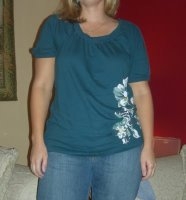 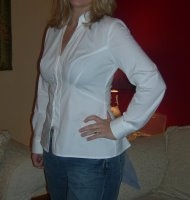 I was also pleasantly surprised by two versatile features of this shirt. First, it can be worn under a suit (it looked better in person than in this photo). 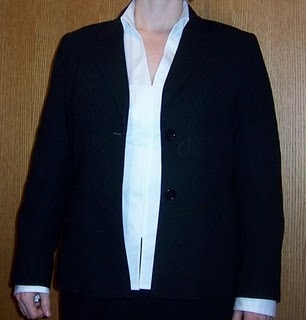 Second, it can be tucked in. 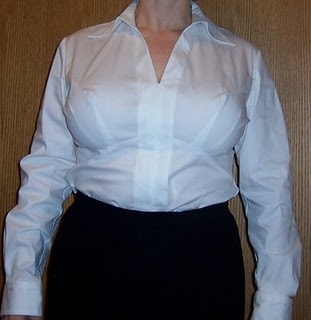 Finally, I only have three concerns. One is the skirt-like bottom of this shirt. I had coffee with a friend while wearing it last week, and she unfortunately confirmed what I didn’t want to hear: it looks matronly when untucked. I wanted her to say it was all in my imagination. Now until I get it altered (I’m going to ask my seamstress to replace the A-line with side slits), I will feel like I’m wearing one of those one-piece swimsuits with a little skirt to hide my thighs. 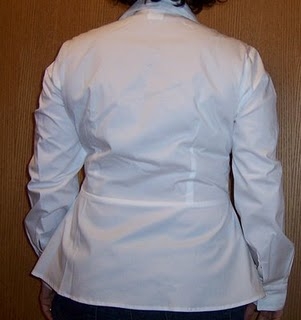 Second, I’m not 100% comfortable with the darts at my breast. If you look at the first picture in this posting, you’ll see a tiny wrinkle where the dart coming from the armhole almost meets the dart coming from beneath the breast. I like all the other features of this shirt enough to wear it anyways, but if I think too much about these wrinkles being right where the nipples are, I’ll become self-conscious.

My third concern has nothing to do with the shirt itself–I simply don’t like “Bratique” in the name “Bratique Helene”. I understand that Carissa is bringing to the U.S. what Bravissimo has brought to the U.K., but given the choice between a line of clothing with “bra” in the name and one without it, I’ll go for the one without it. Right now, however, since the only choice is between a baggy Bravissimo shirt in the U.K. and a form-fitting Bratique Helene shirt in the U.S., I’ll go with Bratique Helene.

(One fitting tip: Consider consulting with Carissa before actually ordering. Following the sizing guide, I measured myself at 44 inches around the bust and ordered an LR. Carissa suspected I’d be an LW because of what has fit in my other reviews, and she was right. You can see the difference by comparing the top photo, the LW, with the tucked-in photo, the LR (in which the dart wrinkles I mentioned above are more pronounced because there’s empty space at the near meeting point).)