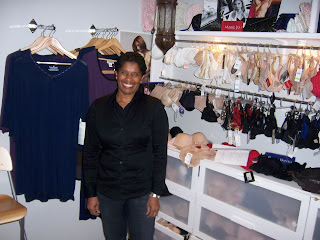 Finding Iris Lingerie was like going on a treasure hunt. I’d seen a blog for her services last December, but it disappeared when I looked for it this fall. Then, on my way to the best vet in the world a few weeks ago (http://www.hopevet.com/), I saw a sign in a nearby window that hadn’t been there before: Iris Lingerie. I googled her name out of curiosity and discovered that Iris has a loyal following in Brooklyn. Now I’m part of her Queens fan club.
I called on a Friday afternoon to ask if I needed an appointment, and Iris sweetly assured me that that afternoon would be fine. For me, a welcoming telephone voice preconditions me to a good experience, and I wasn’t disappointed. Iris Lingerie is located in the basement of Kimera Design (http://www.kimeradesign.com/). Walking down the stairs, I felt like I was entering the privileged territory of a big sister’s bedroom. Everything was pretty, feminine and light. No clutter.
Iris finished with the mother and daughter who were there before me and then turned her undivided attention to me. I explained that I had just purchased a Fantasie balcony bra the day before at Intimacy but was concerned that it might not fit. It turns out I just wasn’t used to the bounce of a balcony bra after always wearing full bras. Iris explained that my Fantasie bra was actually hard to fit, but that it fit me perfectly. That made me feel great. I tried a few more 34F/G bras that looked and felt okay, but when she learned I was planning to lose more weight, she suggested I return in December to see if I could fit a 32 band instead. So now I have a goal.
Later, when I mentioned looking for something my husband might like, she brought out a black lace bra and panty set by Harlequin Lingerie, a British company I’d never heard of. The balcony created some serious cleavage, and there was a sparkling rhinestone in the center. I felt and looked beautiful in it, and Iris agreed. However, when I asked if I should buy it, she said, “I don’t know.” Something tells me Iris doesn’t worry about commissions. At $130, the set was too pretty to resist. And yes, my husband liked it.
Iris helps new mothers adapt their maternity bras and will update the hooks on stretched-out bra backs. She even offered to take a look at some of my old bras to see if they can be altered to fit again.
I’m definitely going back in December. If you go, please share your experience.
You can get there easily, even from Manhattan. Just take the A or C train to Hoyt/Schermerhorn and walk down either Hoyt or Bond to Atlantic Avenue (if you reach Livingston, you’ve gone the wrong way). If you’re coming from Queens, consider the G train (I took it home from Hoyt/Schermerhorn to the Long Island City stop).
IRIS LINGERIE
366 Atlantic Ave.
Brooklyn, NY 11217
(718) 422-1149