A couple weeks ago, Tatyana clothing hosted an outfit giveaway on their Instagram—and I won! My prize was the red Luisa capris and matching Ava Tie Top. It was a really fortuitous prize, because I almost bought the capris a week earlier when there was a coupon!

Tatyana is one of my favorite vintage reproduction brands, but in the past their sizing has been somewhat inconsistent (see my 2013 write-up from back when the brand was called “Bettie Page Clothing”). However, these days most (all?) items on their site have a unique size chart, so you can feel confident in selecting the right size.

I chose large for Luisa even though I usually wear medium because I was nervous about the listed 38” hips on size medium. Turns out, the fabric on both pieces is super stretchy, so I probably could have gotten away with medium, but I think I prefer the large since it means there’s a little more space for tucked-in shirts.

The bust and shoulders on the Ava top are great, but the waist is a little big. However, there’s a super-easy fix for that. Read on… 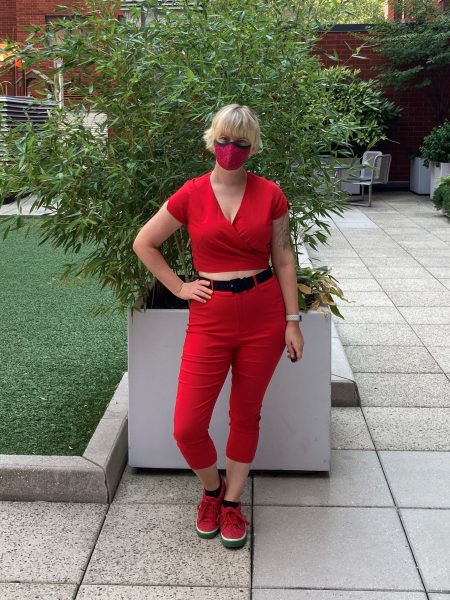 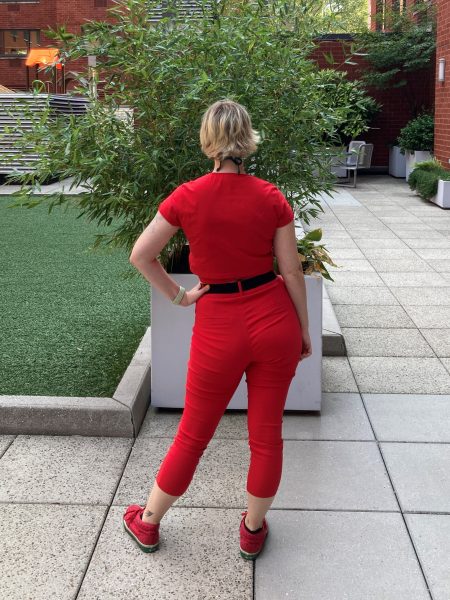 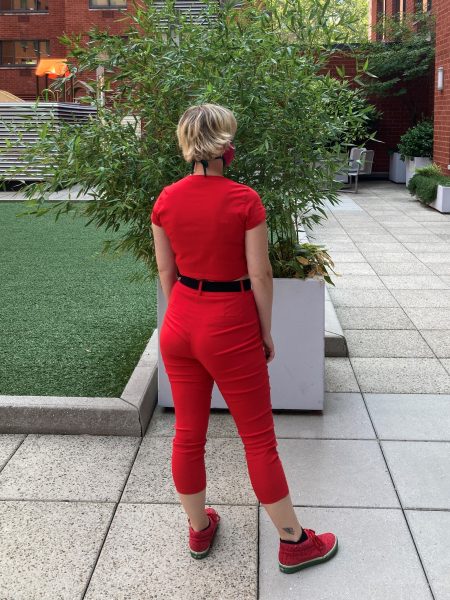 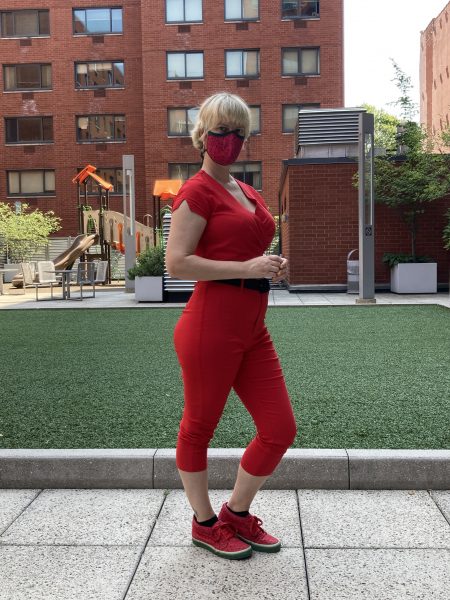 I was originally going to shoot this set with red lipstick, red heels, and my red heart-shaped sunglasses, but then I thought, I won’t be going anywhere in red lips and heels any time soon! So instead I put together a “quarantine outfit” with coordinating watermelon sneakers and face mask and shot photos in the courtyard of my apartment building.

I would say both these pieces are true to the size chart. As such, the waist of the capris is a bit looser than I would prefer. I wear it without a belt around the house, but for going out, I will likely always wear a belt to cinch in the waist. The fabric is a rayon-nylon-spandex blend that’s commonly called “bengaline.” Some bengaline is firmer and thicker than others, though, and this one is more flexible and thinner. It does not feel cheap in any way—in fact, it’s super soft and comfy! But the slightly lighter weight does require seamless underwear.

Overall, I wouldn’t really describe these capris as “curve-friendly” since the hips are cut kinda small for the waist, but the fabric is so stretchy and comfortable that you could probably buy for your waist and still fit the thighs without it feeling or looking like Spanx.

As for the Ava top, though, it’s great for big boobs! It’s designed to be worn as a wrap top or a tie top and is flexible for any size bosom.

For the wrap style, I assumed you would tie the ends in a knot behind your back, but when I tried to do that, it wasn’t long enough. I was really confused until I realized there’s a hook and eye on the end of the ties—so clever!

Hook one end to the other, and you end up with a nice, smooth look instead of a big knot in back. You can even choose which front side to have facing out. If your boobs are two different sizes (most breasts are at least a little different), then this comes in very handy. You can try overlapping each side and see which keeps in place better.

I mentioned above that the waist of the top is a little big on me (makes sense, since the size chart lists the bust [underbust?] as 31” and I measure around 29-30”). It basically sticks out away from my waist and shifts around as I move. However, all you need to do to tighten up the waist is move the hook and eye over a bit. No major alterations required and it won’t affect the fit of the bust!

The tied look is cute too if you want a sexier style or perhaps have a shorter torso and the wrap version is too long. 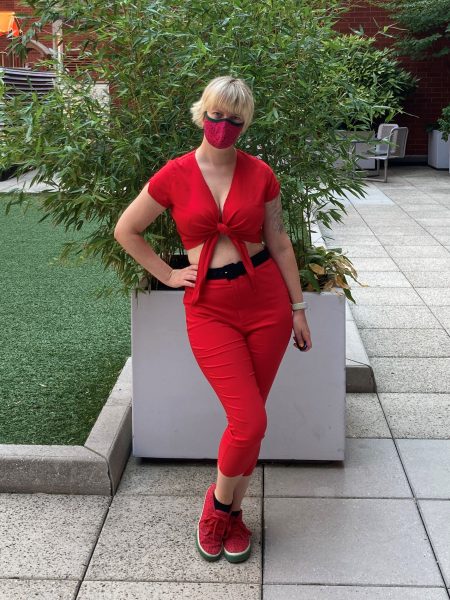 Speaking of length, I love how long this top is. I’ve tried several tie tops from Trashy Diva, but they are so short that even when I size up one or two, my bra is still exposed when I lift my arms. But the Ava top is cropped enough to sit above Luisa’s high waist while also reaching well below the bra-line. Even when worn in the tied fashion, the back stays in place and doesn’t ride up.

I also really like the notches in the cap sleeves for a cute detail. And I really appreciate that there aren’t notches at the calves. My legs are fairly muscular, so every time a pair of capris has a cute little notch in the base of the leg, my calf pulls it wide open and it looks weird.

The Ava top only comes in red, but the Luisa capris are also available in black, brown, and sky blue. They were made in a full length black-on-black plaid too, but I’m devastated to report those are sold out. Maybe Tatyana will release some more full-length colors for fall?

If you like what Tatyana has to offer, I would highly suggest you follow them on Instagram. They’ve since announced another giveaway contest for their cult favorite “To Die For” coffin-shaped purse and they often post sneak peeks of seasonal styles to come. 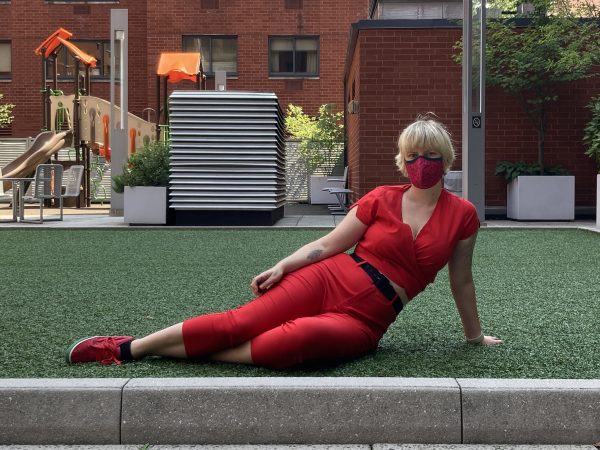 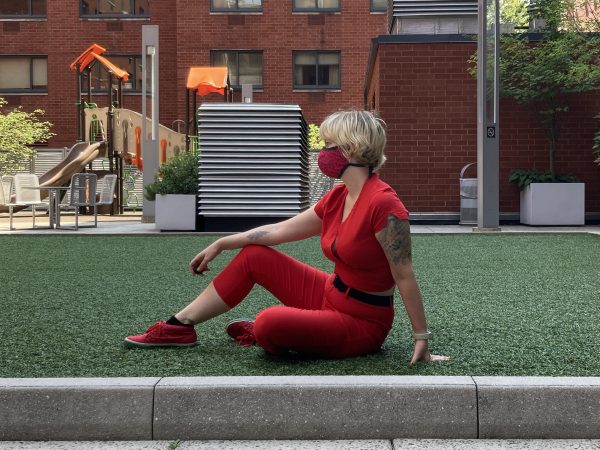