I finally made it to the new Bravissimo store in NYC last Saturday! I didn’t take anything home with me, but it was still so nice to be able to try on clothes, bras, and swimwear that actually fit in a store. 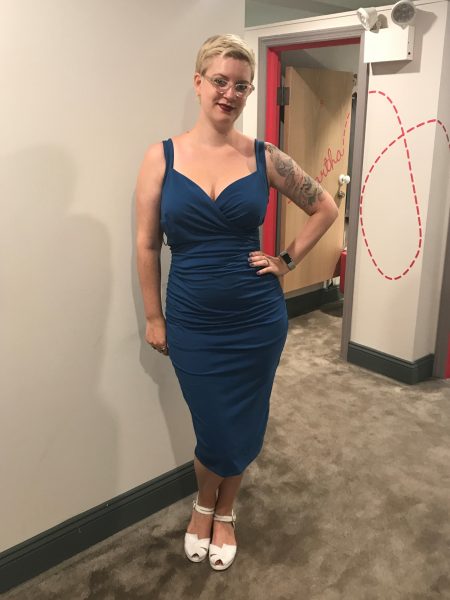 Blue ruched cocktail dress in 12 RC/SC. With this one, I needed to go down to C/RC. There was loads of extra space at the underbust on the sides. Pulled on, no zip. Nice, soft fabric. Super flattering! I liked this one a lot, but I already own a similar dress in the same color from Stop Staring. 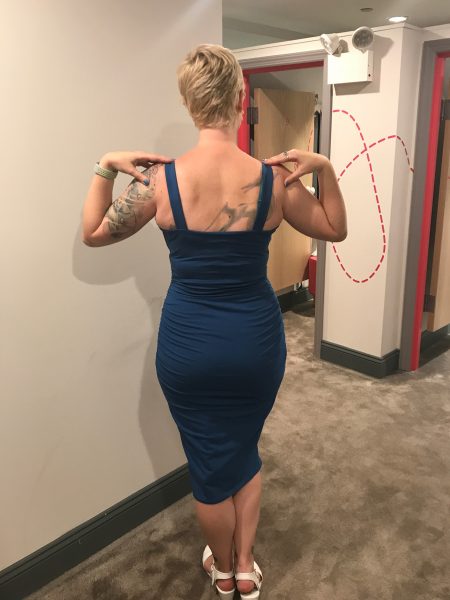 The dress straps lined up perfectly with the bra straps of my Bravissimo Satine (though the dress strap on the right is pushed over a bit, I should’ve had Darlene straighten it). 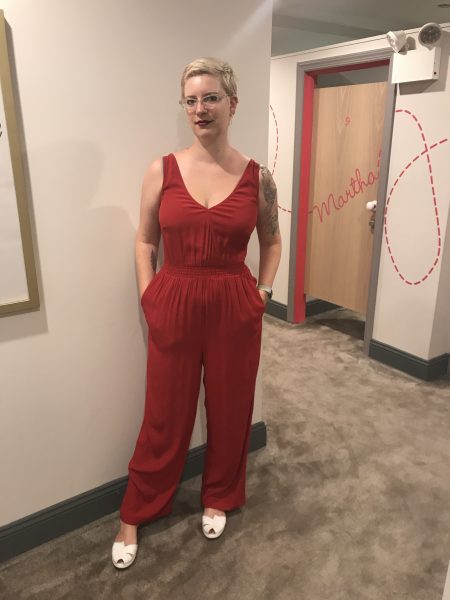 Red jumpsuit in size 12 RC. I needed to go up to Super Curvy in this one, but I hated the fabric, it felt rough. It also did my butt no favors. The jumpsuit pulled on and had pockets, but I had a hard time squeezing the elastic waist over my 43” hips. 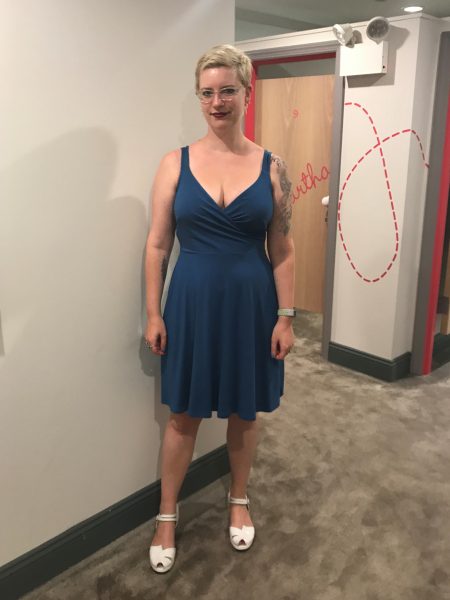 Blue mini-dress in 12 C/RC. Needed a bigger boob size, but also the straps were rather long, so I had too much cleavage. The waist seam was also too high up on my long torso. Cute and comfy, would be great for someone with the right proportions. 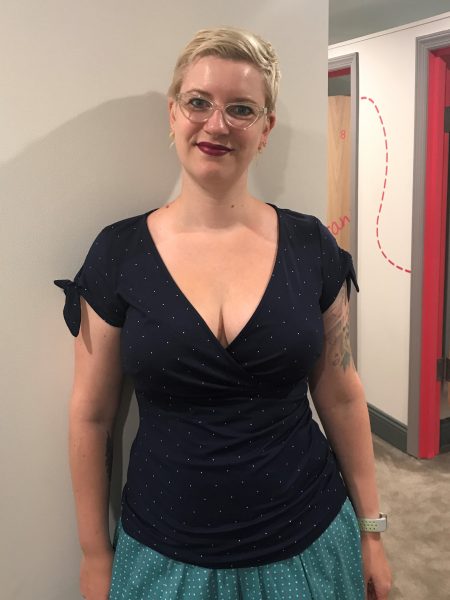 Navy dotted top with tie sleeves in 12 C/RC. Too big on me overall and too much cleavage. I noticed that the white dots weren’t printed but rather were part of the weave—a sign of good quality fabric. 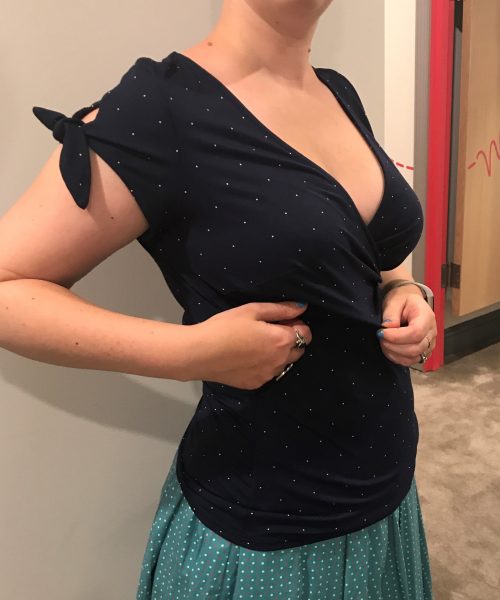 The ribs were a bit loose and there was extra space at the underbust area. 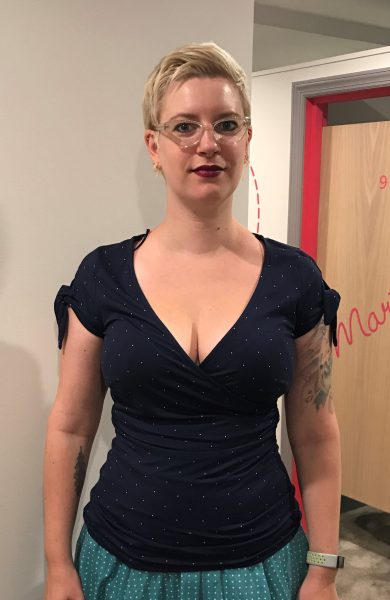 I reeeeeeally liked this top, so I also tried it in 10 C/RC, but there was still loads of cleavage. 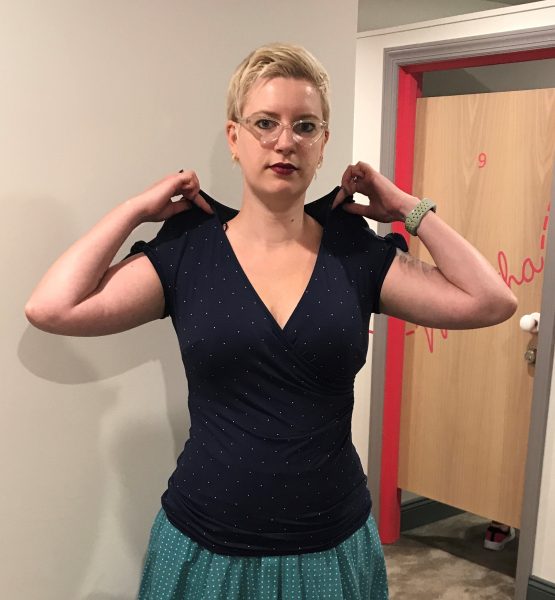 Then I realized the problem is that the shoulders are too tall. When I lift them up higher, the neckline looks much better.

I also tried on this denim shirt in half a dozen sizes, but its sizing was insane: 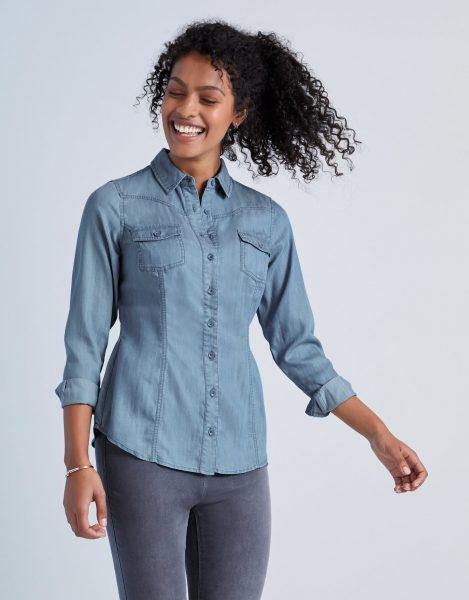 I was swimming in size 12 at any boob size. Size 10 was also way too big. Finally, I tried 8 RC, but it pulled at the buttons, then 8 SC, but it was too big in the boobs and the boob space was lower than where my boobs are actually located. The shoulders of size 8 were also too narrow, I could barely lift my arms.

So my final assessment of Bravissimo’s clothing wasn’t really all that positive, to be honest. Everything I tried on except the denim shirt pulled on with no closures. I would’ve preferred a little more tailoring and zippers or buttons, especially when trying to yank things over my ample hips. Additionally, the sizing was awfully inconsistent.

However, that all makes me appreciate the brick and mortar store even more, because it means I can try things on in person and get a good idea of what size I’d need in similar items online (since there are lots of additional items online that aren’t in the shop).

Moving on from clothing, I found an absolute standout success in one of Bravissimo’s bras: the Alexa plunge in 30G. 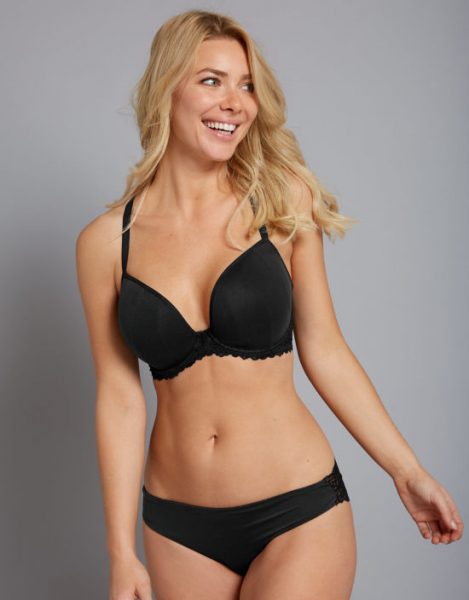 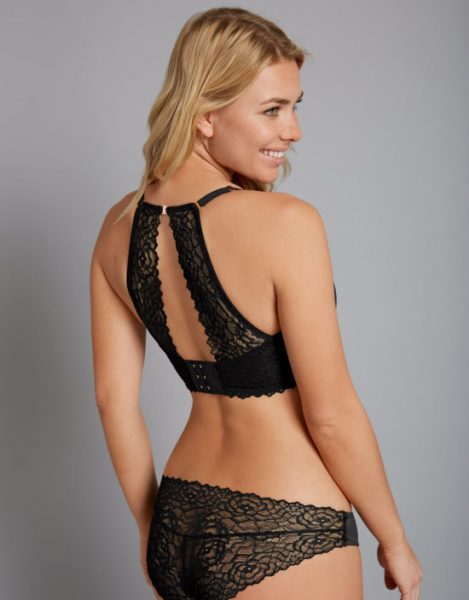 I’ve somewhat grown out of my old Passionata “Starlight” bra, but it’s such a great design for narrow-shouldered sleeveless tops. However, the Starlight doesn’t open at the back of the neck, so you have to pull it on over your head, and thus the lace back has worn out a lot, especially where it attaches to the band. Bravissimo’s “Alexa” is a perfect replacement—only improved!

Alexa opens and closes at the neck. It comes in bigger cup sizes than Passionata (up to UK J cups!). And the fabric is gloriously soft. The shape is round and works really well for my boobs. The gore is a wee bit wide for me, but that’s a minor quibble—I just may need to readjust a bit throughout the day. It’s such a winner that I’m going to buy it in both black and pink (which is a dusky rose shade that acts as a “nude” on me).

So why didn’t I buy it at the store? Well, it’s $72 in person or via the US Bravissimo website. But it’s only £36 (about $45) on the Bravissimo UK website! I know all the US prices are slightly higher because there are additional costs to bringing the product to the US . . . but I’ve been buying from Bravissimo’s UK site for years, so I’m perfectly comfortable ordering from there, and I’m not in a hurry.

I tried a few other swimwear and bras too. First was this super-cool sporty “Sydney” bikini in 30G and Medium: 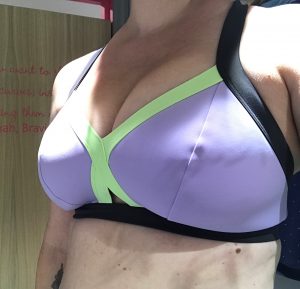 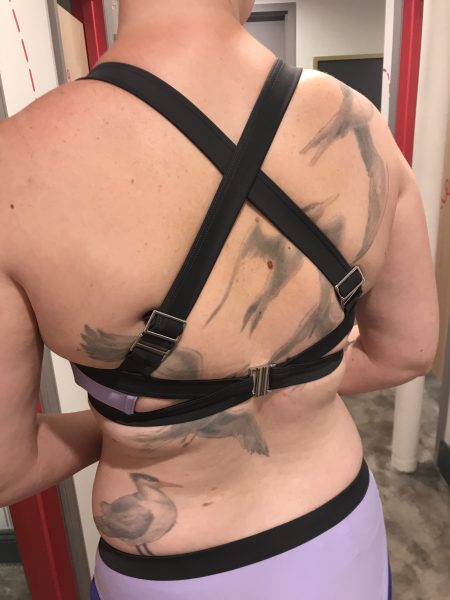 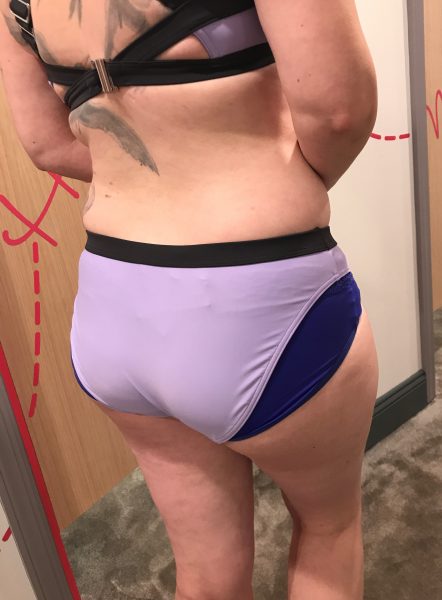 Unfortunately, neither the top nor the bottoms worked for me. To be fair, I needed to go up a cup. But there were also issues unrelated to cup size: Even at the longest length, the straps still felt too short. And the cups were crushing over at the bottom similar to the Panache non-wired sports bra, so I think it’s also an issue of my boobs just not getting along well with non-wired bras of this shape.

I’m also not feeling how skimpy the bottoms are. These are the standard briefs. I also tried the cut-out briefs, but both had basically the same amount of cheek coverage. You can see how my bright blue underwear covers much more of my bum. I just don’t like to have half my butt cheeks sticking out, as it’s prone to wedgies and I end up pulling on the briefs all day.

I also tried the Curvy Kate “Lemonade” bra and the Bravissimo “Rosa” bra, both in 30G, but both had cups that weren’t tall enough for my boobs. Nearly half my breast tissue was above the point where the strap attaches to the cup, so I couldn’t get very good support. Bravissimo’s plunge bras definitely work better for me than their balconettes.