It’s been three weeks since I attended a screening for the documentary Embrace, and I thought I’d share my impressions here. First, if you get a chance to see it for $15 or less (some upcoming screenings in Manhattan are $35!), it’s worth it, but only if you think you can engage in conversation with the women around you and enjoy their camaraderie. Otherwise, wait for it on Netflix.

The original screening that I was helping to promote was going to have a panel discussion afterwards. It’s too bad it didn’t sell enough tickets because there was a lot to talk about. Often “body positive” has a one-dimensional feel to it, full of breathless clichés, and I like it when people dig deeper. For instance, as I walked out of the theater on September 19, I heard one woman say, “But I lost 110 pounds.” The movie only focused on the negative aspects of diet, and a Q&A session could have made room for this woman’s experience.

I bring up her comment because the movie spent a LOT of time diet-bashing, as well as media-bashing. It is completely valid to criticize companies that create and profit from women’s insecurities about their weight and appearance. The image of a gorgeous “plus” model strolling through the mall in just her underwear as statistics about women’s dissatisfaction with their bodies flashed on the screen and the model talked about past industry rejection was very powerful. Unfortunately, the analysis didn’t go much beyond diet- and media-blaming, and I was ready to move past this point long before the filmmaker.

I also wondered if anyone else in the audience was as un-shocked by Taryn Brumfitt’s encounter with the plastic surgeon as I was. One interviewer primed me to be scandalized when she asked Taryn, “How the hell did you not sock him in the face when he was talking about your boobs?” When the moment arrived in the documentary, he simply gave her the option of a breast lift so that her nipples would face forward instead of down after years of breastfeeding. Sure, it’s possible to be offended by that and all the other suggestions he made to “improve” her looks, but to me it’s like the Geico commercial– as in “He’s a plastic surgeon. That’s what plastic surgeons do.”

The film had its greatest impact on me when it focused on these individuals: 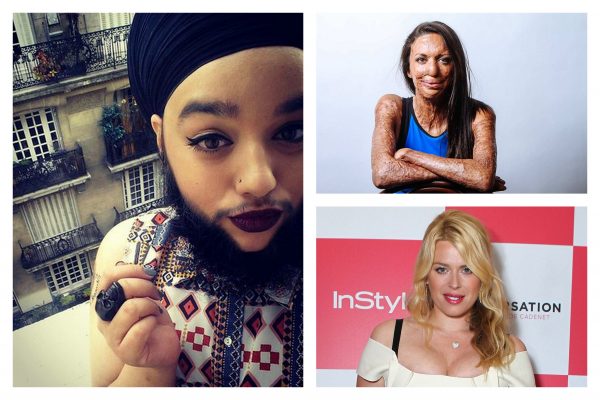 Chapter 6 of this book by Autumn Whitefield-Madrano is one reason I felt skeptical of all the media-blaming in Embrace. It’s titled “Who’s Afraid of the Big Bad Media? Skinny Models, Idealized Images, and Why Maybe It’s Not Such a Big Deal”. Needless to say, I jumped into Chapter 6 as soon as I got home from the library. Autumn is an author I would have loved to have heard on the panel.

She writes that “the assumption that media hurts women’s self-image is so entrenched that to suggest otherwise is tantamount to treason to advancing women’s issues.” She then courageously suggests otherwise. I highly recommend reading this chapter (and the others) for yourself.

I was most fascinated by the difference it makes in whether a woman compares herself against, or identifies with, a photograph of a conventionally beautiful woman. When she focuses on the ways she doesn’t measure up, she feels worse. When she identifies with something about the model, she feels better about herself. Unfortunately, many assessments of self-esteem use a numbered point scale (e.g., “rank yourself from 1-5”) that, while easily quantifiable, is also a form of comparison that can skew results. When a less quantifiable assessment is used (like filling in the blank for “My body is ____”), women respond much differently. As Autumn notes, the end result of using numbered point scales is data that

consistently reflects media’s negative effect on women, even if it’s the data-gathering method, not the visuals themselves, that provokes it. This data then gets heavily reported by media outlets that seek to improve women’s lives–as well it should. But in that reporting, we lose the nuances of how we arrived at these dismal statistics. It’s a stronger message to say that advertising images hurt women than it is to examine and report the subtler truths about the ways women absorb those images. What we lose along with those subtleties is the fact that a response of suffering is not necessarily the baseline of all women. And in trying to raise awareness about the ways idealized imagery can potentially harm us, we wind up not only criticizing an unhealthy relationship with the media but normalizing it too.

I love when magazines use a variety of women for their covers because I assume it promotes an “identification” response from readers and therefore encourages healthier self-esteem. Embrace makes the same assumption because during its interview with the former editor of Australian Cosmopolitan, the documentary makes a big deal about her use of plus-size models for the magazine’s covers.

Face Value, on the other hand, questions this assumption. Autumn writes about Glamour‘s use of a small photo in 2009 of a plus-size model that received so many positive responses from readers that the editors promised “to give the best plus models not just work, but the same great work straight-size models get”. She also writes about a German magazine called Brigitte that began using only readers as its models in 2009. Today, “Glamour continues to use plenty of models who are better racial and ethnic reflections of the American population, but the size diversity initiative appears to have taken a backseat. Brigitte quietly reversed its no-models policy in 2012.” Basically, sales dropped after the changes. Autumn uses examples of best- and worst-selling covers for other magazines to make her point that “[r]obust bodies, it turns out, do not necessarily make for robust sales, regardless of how many letters the editors may get from readers lauding the cause.” When it comes to racial diversity, Autumn reports that the data is mixed on how covers with black and Latina models affect sales; however, “the lack of direct numbers correlating cover models of color with higher sales doesn’t exactly support a case for readers wanting to consume images of their own likeness.”

Autumn’s theory is that readers don’t buy magazines because they feature women they relate to or because they want to feel bad about themselves. Instead, they buy magazines that tap into both the identification and comparison response.  Magazines seek a reader with a baseline of satisfaction with herself (identifies with images in the magazine) who also aspires to fix something with which she is dissatisfied (compares herself).

For these and its many other observations, Face Value is an invaluable addition to the body positive discussion. Whether you watch Embrace in a theater or at home, I highly recommend pairing it with Autumn’s book. Once you do, let’s have our own panel discussion about both of them!