I was on vacation in Maine last week, including spending a few days in Portland, where my husband and I ate and drank to our heart’s content. I hadn’t anticipated doing much shopping there, and I certainly didn’t expect to find a lingerie shop that carried anything for the full bust, but that’s exactly what I stumbled upon on my very first day there!

Etaín is a really lovely little shop carrying a wide range of brands and sizes, with a distinct perspective. Much to my delight, there was nary a “nude” bra in sight! There were bright colors and cheeky materials, brands both well known (Panache) and independent (Fortnight), and items to suit several needs (in addition to conventional bras, there were binders, loungewear, swim, and sport). It was a beautifully curated collection that somehow still managed to provide something for everyone despite the lack of boring basics. 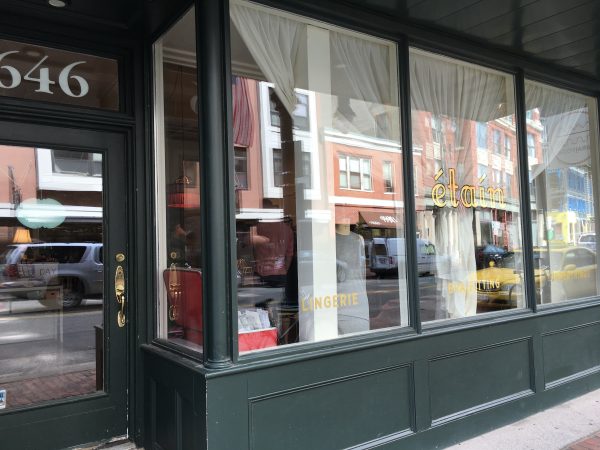 Owner and manager Mackenzie Morris was on duty when I walked in the door, and she was exceedingly helpful. She knew the stock well, and knew the size range of each of the items I considered, which made trying a few new things a real pleasure.

The first item that caught my eye was the Marlies Dekkers Dame de Paris triple-strap cage bra. I’ve been positively obsessed with this bra since I first saw it at a Curve show several years ago. But since Marlies stops at an F cup and the bra is quite pricey at $109, there was no way I was going to buy it online when I knew I’d have to sister-size by at least two bands. 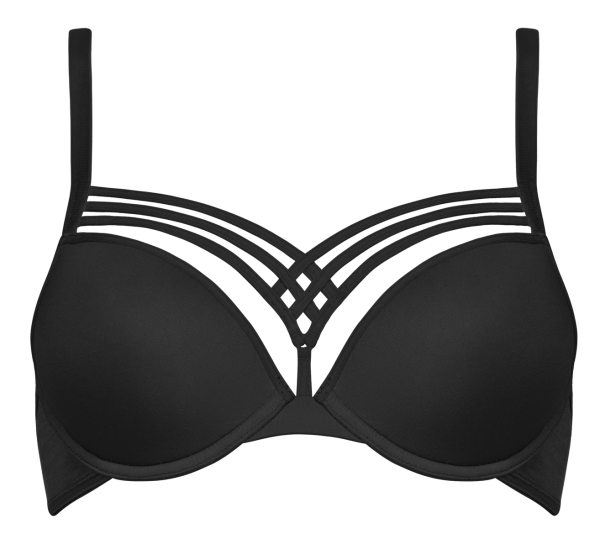 Happily, Etaín had a 32F in stock (two sister sizes from 28G), so I finally had the chance to try it in person. Sadly, even the 32F was too small in the cups. Since I’m really between 28G and 28GG, I knew this was a possibility. I think I could have gotten away with one cup size up, and the bra does come in 34F, but the band was so stretchy and loose on me in 32 that I don’t think a 34F would be salvageable. It’d simply be too long to alter.

The next set that caught my eye was an amazing black and neon lime “Luna” longline bralette from Fortnight, another brand I’ve been dying to try.

Once again I trotted to the fitting room with the biggest possible cup size, which also happened to be 32F. And once again I was one cup size too big. Curses! I loved—LOVED—this bralette. The four-hook band was long enough that it still felt supportive and stayed in place without riding up. The cups offered surprising support and my breast tissue stayed above the band and in the cups. There’s also interior sheer black side slings in select sizes (including 32F) that kept me from going east-west. But there was simply too much side-boob spillage for me to justify spending $98 on it.

And yet I’m still tempted to buy it online! I even emailed Fortnight to ask if it could be custom-made in a 32FF or 34F (since their size chart does list up to 34F…but only the wired balconette bras actually come in that size, and they’re not available online). While the rep told me they can’t custom-make me a bra, she did tell me they’ve gotten lots of requests to expand the sizing, and they’re working on expanding the Luna longlines in particular. But that still means I’ll never get one in black and neon…sob, sob…

After the first two disappointments, Mackenzie asked me if I’d tried the brand Lonely. I’d never even heard of it! She described it as a cross between Fortnight and Marlies Dekkers, and I couldn’t agree more. Lonely uses lots of mesh, lace, and strapping details. Mackenzie also told me the brand is known for running more generous and deeper in the cup. She gave me the Lulu Strap bra to try in 32F. 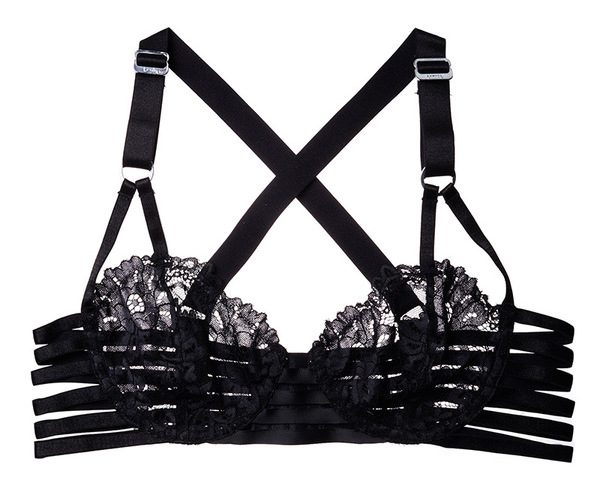 Perfectly enough, I had actually seen the set on a mannequin in the store window, but assumed it wouldn’t come in my size. So I was really excited to discover that it almost did. And this time, finally, the bra was a success! Yes, the band is technically loose, but it has four rows of hooks and eyes, so it stays in place pretty well, like the Fortnight Luna. The cups are a little small, but it has enough of a straight-across balconette shape that the extra tissue spilled up rather than out to the sides or into my armpits. Plus it’s obviously more of a boudoir piece anyway, so it doesn’t need to fit perfectly. 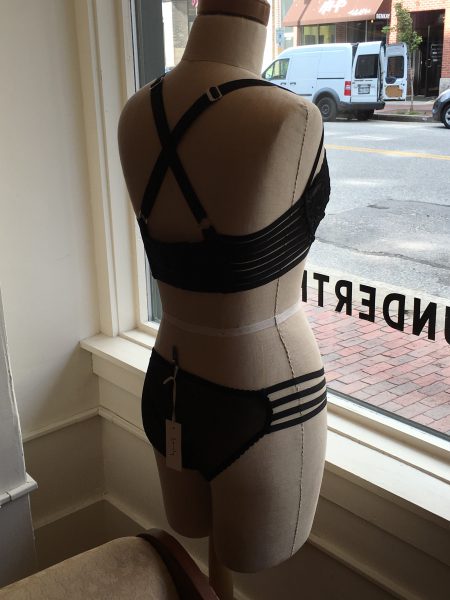 Readers, this bra is amazing. It makes me feel so good when I’m wearing it. As for the details, well they’re worth every penny. The band is made up of eight parallel straps. The cups are unlined black lace with a single vertical seam up the middle. There’s essentially a faux side-sling where two small straps grow out of the cup and join to the thicker primary strap with a large silver ring. Then the two main straps are set as a cross-back instead of leotard formation. This makes it a little trickier to get on and off, but it’s an absolute relief for my narrow, sloping shoulders. I also adore the large silver hardware. Additionally, the inner side of all the straps is so soft. It feels like butter, especially with the wider primary straps. I wish all bra straps were made of this fabric—silky and shiny on the outside, felt-like on the inside, and the perfect amount of bounce and stretch.

Just before pulling out my credit card, I opted to check out the matching bottoms, and they are also a wonder. My squishiest spot is my lower tummy and love handles area, so I usually avoid anything strappy like the plague. But I really wanted the matching set here, so I simply sized up to a large and hoped for the best. And readers, these panties are So. Freakin. Great. 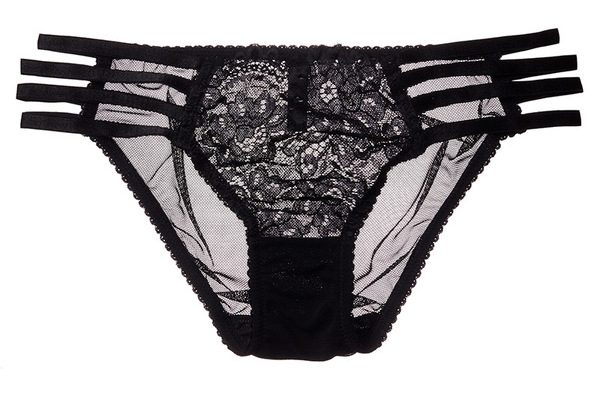 They have pretty good coverage in back, but it’s completely sheer, and the front panel is more of the black lace, so they’re quite sexy without being “trashy.” And the straps don’t dig in at all. Seriously! Maybe it’s because they’re placed so close together, or it’s just that miracle material I gushed about already…but these are so comfy I would literally wear them as regular underwear if I wasn’t concerned about having them get worn out too fast.

At $174 for the set, this was the most expensive lingerie I’ve ever bought, by leaps and bounds. And maybe it’s just that I was on the high that comes with being on vacation, but I actually felt really good about the purchase. I love that I supported both a small, independent store and a small, independent brand. It really makes me reconsider my habit of buying bras online and only when they’re on sale. Perhaps I could make this into a once-a-year treat for myself while simultaneously buying fewer “practical” bras. Of course, it would help if New York City had a cute boutique as well curated as Etaín!

Read more at etainboutique.com, and be sure to stop by next time you’re in Portland, Maine!