Happy New Year, everyone! Now that the holidays are over, I should be back on my usual weekly schedule.

Starting the year off with a mostly positive review, here we go with the Cleo Hettie bra. I was first introduced to Hettie at the Curve show last February, and it was the one bra from that seaon I knew I would absolutely be buying. When Figleaves.com recently put it on sale (it’s still available in limited sizes!), I snatched one up. Not having read any reviews of it yet, I took a chance and ordered a 28GG.

My size in Cleo ranges depending on the bra, including 28GG in Marcie and 30G in Meg/Lily/Erin. Marcie is actually a little too big on my smaller boob, but one size down is way too small on my bigger side, so I size up and fill out my smaller boob with a “cookie.” Meanwhile, the Meg is completely perfect on both boobs in 30G.

There was a time when I always took a 30 in Cleo bras because I found them tighter than other brands, but in recent years the bands have been made out of stretchier materials, so now I’m often my usual 28. Additionally, I sometimes take 28G or 30FF in other British brands (such as Freya), but I find that Cleo’s cups are on the slightly less generous side, which is why I size up with them.

Anyhow! Let’s move on to aesthetics, and then I’ll discuss Hettie’s fit. It’s a three-part bra with one vertical seam on the bottom half, which leads into the straps, and a sheer stretch black lace upper section.

I’m a sucker for blue lingerie, and Hettie is no exception, although the color is a bit muted. The bottom half of the cup is bright blue with a sheer black overlay that allows the blue to peek out through little holes. 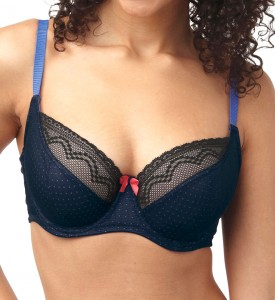 Although Panache’s photo above makes this bra look like a plunge shape, it most definitely is not. The picture from Figleaves is much more accurate, and shows how the bra goes straight across the chest: 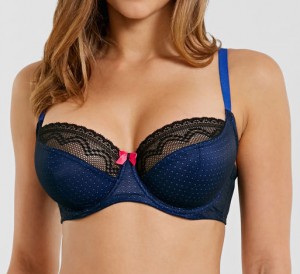 Unfortunately, in GG and up, the black lace portion is lined with black mesh, so you can’t see the pattern at all:

I do really like the simple coral bow at the gore, and I love the textured straps, especially with the addition of soft felt on the underside, which makes them super comfy without being slippery: 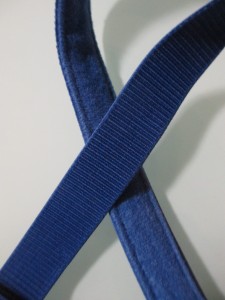 Additionally, there’s something magical about the bottom edge of the band because it doesn’t curl in or out at all. I think this is literally the only bra I’ve ever had that managed to avoid the curl, which I ordinarily find pretty uncomfortable. I’ve worn this bra a ton since I got it, and you can see in this photo that the edge isn’t bent or curled at all:

So moving on to fit and comfort: Hettie doesn’t fit quite like any other Cleo bras I’ve tried. The wires are their usual on-the-wider-side but without digging into my armpit. The straps definitely seem wider-set, however, than Marcie and Meg. As such, the profile isn’t quite as up front as those designs, and it gives a slightly more “natural” and less “super rounded” shape than usual. 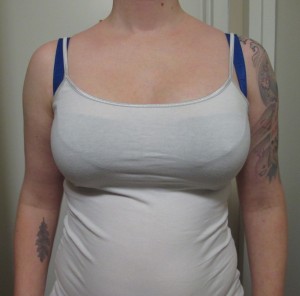 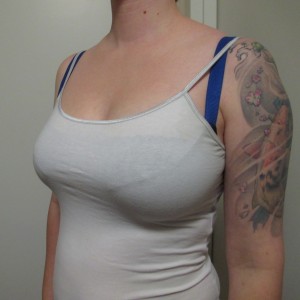 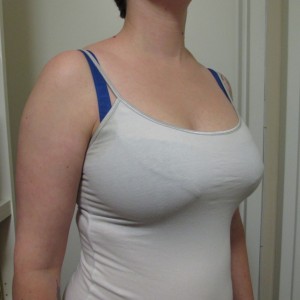 Additionally, the cups definitely run small. It’s perfect on my smaller boob, but I get just the slightest quad-boob where the blue fabric meets the upper lace section on my bigger side. I definitely do not need a cookie in this bra.

Further, while I ordinarily wear bra straps adjusted somewhere in the middle, with enough extra length to shorten if needed and plenty of length to elongate, with Hettie I’m wearing the straps as long as they’ll go. Though I have a long torso, I have a relatively short distance from the top of my boobs to the top of my shoulder, so this makes me think taller gals or ladies with a longer shoulder-to-breast distance will have a problem with these straps. Was Cleo getting complaints about too-long straps? All my other Cleos have fully adjustable straps, so this seems unlikely, and I don’t really understand the decision to make Hettie’s so much shorter.

As for the band, well it’s the loosest Cleo band I’ve ever worn, by a long shot. More often than not, I take a 30 from Cleo, but I’m wearing this 28 on the middle or third hook right off the bat. This does not bode well for its longevity.

That’s a lot of negative feedback so far, but despite all my nitpicks, this bra is actually super comfortable! It’s so light and doesn’t dig in anywhere. I forget I have it on no matter how many hours I’m wearing it. It doesn’t even dig in or itch where the band meets the cup on the right side of my ribcage—literally every other bra I own does that!! Additionally, the stretchy fabric of the lower cup and the stretch lace are a dream against the skin.