It’s been a long time since I’ve done a straightforward bra review, but I’m excited to introduce you to the Freya Minx, especially after I gushed about the design during the Curve Expo this past March.

To be honest, I like the “Tabasco” colorway better in both name and aesthetics, but the leopard and lavender color is currently on sale for 60% off at Figleaves.com, so that’s what I ended up buying.

Still, while I tend to avoid realistic leopard in favor of more unusual shades like monochrome or neon, the pairing of it with the cool-hued lavender is most unexpected in the best of ways, and adds a sense of modernity. It also helps that Freya did a nice job with the lookbook photography: 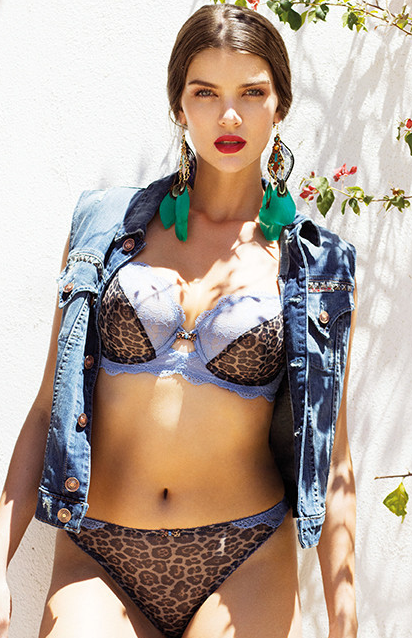 Some details that I highlighted in the Curve post:

I bought this bra in 28G, the same size I always buy from Freya.

Now, the delicate sheer fabric, thinner straps, and single hook had me a little worried about fit. Would this bra really be able to handle a pair of G cups? Happily, the answer is definitely yes!

The profile is just like most of Freya’s other half-lace plunge balcony bras—well lifted, yet natural with just the slightest pointiness. The keyhole doesn’t affect the structure at all, since the wires are still in their traditional position.

As for the band, it remains just as supportive as your conventional two-hook option from Freya. In fact, I found it tighter than usual, though it loosened up after I wore it several days in a row. The support is due in large part to a piece of vertical boning where the band splits. The boning is quite strong yet surprisingly bouncy. If I fold it in half, it springs right back into position, and it doesn’t dig in or feel uncomfortable at all.

I quite like the single hook in back as well because it doesn’t dig into me if I sit in a hard chair, which is often an issue even in my best-fitting bras. Apparently I have a sensitive spine?

I also like the fabric. The leopard portion has a little more give in all directions than other Freyas I own. The lace is quite thin without any mesh liner, making it flexible and able to mold to any shape. However, the elastic at the edge of the lace does dig in a little, so this may not be the best design for someone especially full-on-top.

The only thing I wasn’t crazy about is that the straps seem unusually stiff. As mentioned above, I wore the bra for several days in a row when I first got it to loosen up the band. But even after all that, the straps still seem weirdly stiff and unyielding. Further, they attach a little far out to the sides in back for my narrow shoulders. They feel close to sliding off my shoulders and I find myself pulling on them throughout the day. Unfortunately, due to the unique band structure, I can’t unsew the straps and move them over, so there’s really no escaping it. But other than that, I’m very pleased with this purchase!

1 Comment on Off the Rack ~ Reviewing the Freya Minx Bra