A law school friend asked me to reach out to Ester, her Tanzanian translator who was in New York “with 5 albino children who will be fitted for prosthetics”. Like me, you may be wondering what the significance is of the children having albinism? 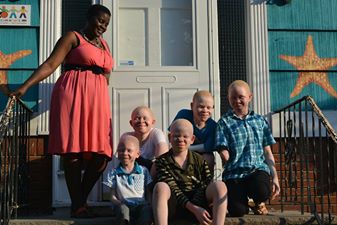 In Africa, and especially Tanzania, people with albinism are regarded as bad luck and outcasts . . . unless a witch doctor instructs his client to return with the limb of a person with albinism so that he can mix it with a potion to bring good luck. Ester, who you see on the left in the photo above, works with the 320 children with albinism that are sponsored by Under the Same Sun. One of her jobs is to make sure they are placed in private boarding schools with strong security.

Six months ago, a group of men barged into six-year-old Baraka’s home and hacked off his hand. His story caught the attention of the founder of Global Medical Relief Fund, who tried to contact his parents to bring him to the United States for a prosthetic. Instead, she reached Under the Same Sun and ended up bringing Baraka and four more children with him. That’s how Ester came to be in New York City with the five children you see in this picture. (Baraka is the smallest child on the left next to Ester.)

Although these children return to Tanzania on September 30, a Tanzanian teenager with albinism will take their place, so Ester will remain. Having packed for only two months, she is now at the end of her third month and running out of clothes!

Last night, Hourglassy’s clothing swap came to the rescue. Thanks to some great pieces that no one took home last year, Ester now owns several dresses, blouses and bras that fit her perfectly. What an honor it was to be able to help this amazing woman.

With our first swap in 2012, I promised to donate any unclaimed clothes to charity, but last year I had an idea I like better: keep the clothes in my basement for the following year’s swap, and make them available to busty women who stop by before then. Doesn’t this make you want to visit New York City? Of course, if you already live in or near the city, then you should come to our 4th Annual Big Bust Clothing Swap this Saturday!

When I drove home from visiting Ester last night, I felt thankful that my goal of helping busty women find clothes to fit had been reached in such an unexpected way. My encounter with her charges, however, gave me a new perspective on the theme of self-acceptance that we often discuss here. Under the Same Sun sponsors many children with albinism who have run away because their own families are the ones who want to harm them. How can a small child have the strength to refuse to believe the lie that she is worthless and to fight for her very survival? The battles that these children are winning gives me courage to overcome my much smaller struggles. I hope they do the same for you.