I’m super late to the Tutti Rouge party, but I don’t mind because originally I didn’t even want to go. If you’ve been reading bra blogs for a while, you know that Tutti Rouge made a big splash in 2013 with its fresh styling, packaging and marketing. There were many reports of inconsistent fit issues (including Leah’s that she shared on Friday, plus I had tried a friend’s Tutti Rouge bra that didn’t work for me), and I thought Tutti Rouge was yet another new company promising big things to big busts that it couldn’t deliver.

In the final hour of the final day of Curve, I finally stopped by their booth. Since Mia hadn’t had the chance to visit them for her J-Cup Chronicles, I thought I should check them out (and I didn’t realize Leah already had!). That’s where their PR and marketing manager Katie changed my mind about the brand. As she showed me the gorgeous emerald Beatrice (it reminded me of raw silk in person), I asked, “Is it true that your bras are better for shallow breasts?”

“Some of them are,” she admitted. “In fact, we’re fixing the cup in the Beatrice so that I don’t slip out the center when I bend over.” Fortunately, Tutti Rouge also makes bras where where slippage isn’t a problem. Katie wears a 32G, and she finds the Nichole works great for fuller boobs. She even pulled down her shirt to prove it–and told me I could publish the picture! 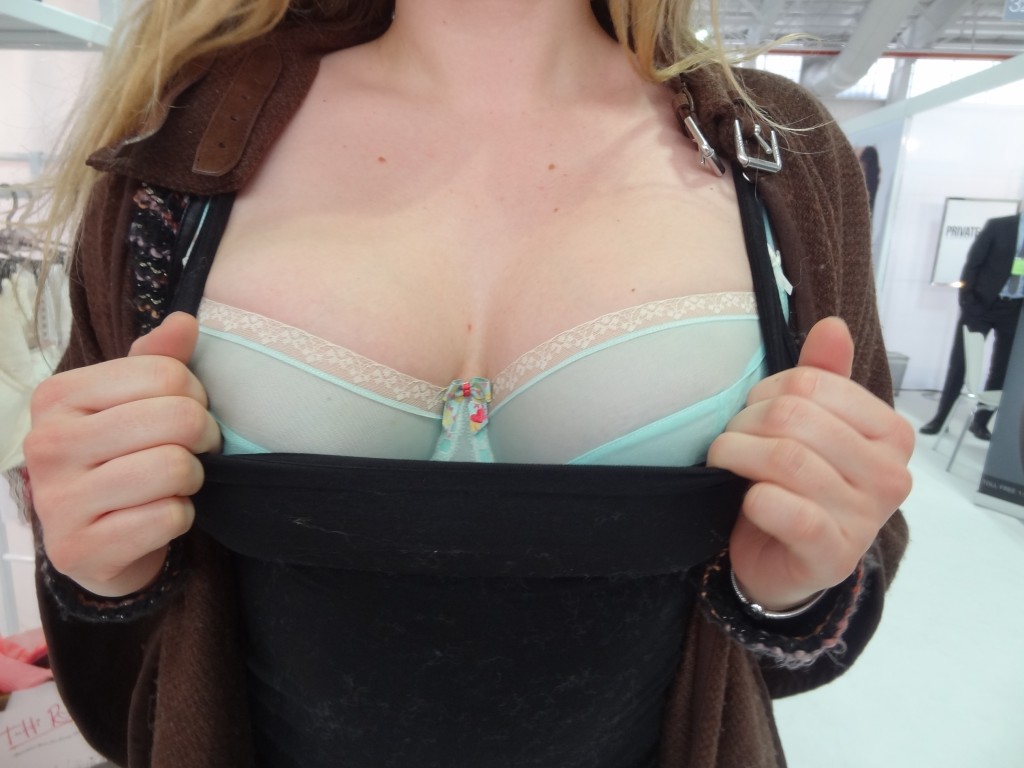 It turns out that Katie isn’t your typical marketing maven from the outside. She used to be a fit model for Wacoal, so she knows the ins and outs of bra fit and function. In fact, until the Tutti Route Fifi (below) came on the scene with its side sling for upward and forward projection, she refused to leave the Freya Deco behind. The Fifi and the Liliana (last picture in this post) are Tutti Rouge’s two styles that go to a J cup. Everything else goes to a HH cup.

On the other hand, styles like the Beatrice, Betty (below) and Kitty, where overflow is allowed, are great for a shallow bust. As Katie made clear, these aren’t run-for-the-bus kinds of bras.

Katie also pointed out that certain styles, like the Tallulah below, will always work better on the 30F model than they do on her. (By the way, the Tallulah tattoo print that Miss Underpinnings described in August is also out now!)

Finally, Tutti Rouge is quite excited about the Jessica, which Leah told you on Friday is the “world’s first unpadded plunge with removable cookies”. To add a little more detail, the removable cookies are graded for bras up to a HH cup–it’s not “one cookie fits all”–and they create a gentle cleavage by pushing the breasts to the middle instead of pushing them up. Below, the model is wearing the Jessica with the matching garter belt. 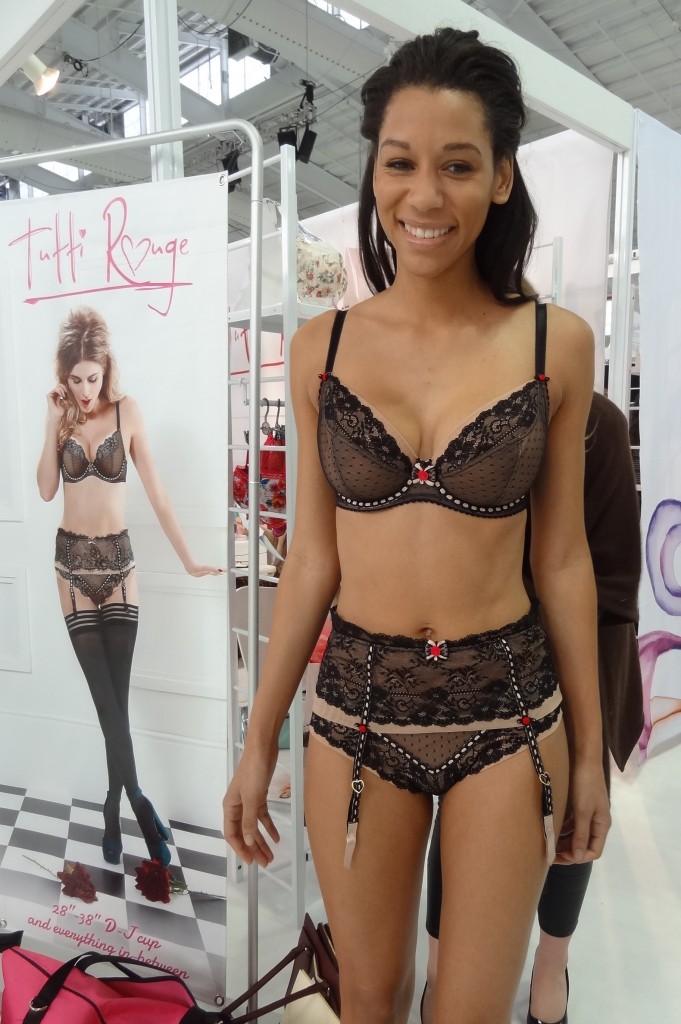 Last summer, a reader asked Hourglassy to tell readers where they can find the bras that we rave about at Curve, and we’re going to try to do that. Here in New York, the well-respected Suzette’s carries Tutti Rouge, and I called them this morning to find out which styles they carry.  They currently carry the Nichole that you saw Katie wearing above, as well as the Eliza, which Science and Silione reviewed in December. In two weeks, you can expect to find the Liliana there.

Thanks to Suzette’s good experience with Tutti Rouge, I’m pretty sure you’ll soon find Tutti Rouge in more brick and mortar stores than those currently listed on its stockists page. Bravissimo and Figleaves will also carry it.

If you’ve worn Tutti Rouge beyond the dressing room, would you tell us in the comments how you’ve liked it? We’re hoping to be able to try it ourselves soon!

2 Comments on Pretty Bras for Big Breasts: My Second Impression of Tutti Rouge