This week I went into a brick and mortar bra store for the first time in my life. I saw a Cleo bikini in a shop window and stopped in my tracks before I realized I was standing outside Town Shop (in NYC). It was 30 minutes before closing, so I popped in just to see what they had on offer.

I was immediately approached by a saleswoman who asked if she could help me. I asked if they carry size British 28G. She was confused by the specifier “British,” but I clarified that I just meant brands like Freya and Fantasie. I noted that technically American sizing would put me in a higher letter. I’m not surprised she was a little confused, though, since there are barely any American brands that carry big cup sizes and use the American sizing schema. In fact, the only DD and up American brands I can think of all use British sizing (Claudette, Parfait, etc).

Anyhow, the saleswoman took me straight to a fitting room without even browsing the floor. She then returned with five or six bras all in size 28G. I was excited to see a few styles I’ve been wanting to try for years (Freya Gem and Rio, Cleo Lucy). Not being shy, I whipped off my shirt to try them on, at which point the saleswoman marveled at my beautiful new Ewa Michalak bright green lace bra (the S Musisztomiec).

As I tried each bra, I commented on what I liked or not, what I thought of the fit, and so forth. We went back and forth on fit a little, but the saleswoman was polite and not at all disagreeable. For example, I thought one of the Freyas seemed unusually tight, and she tested the band and agreed, but said she didn’t think it would be a good idea to go up a size since it would stretch out. I liked that with each bra I tried on, she tugged here and there to make sure everything was situated in the right way. I especially appreciated when she yanked up on the straps to make sure the underwire was right up under my breast tissue where it should be. If only I could have a bra assistant with me every morning!

It was a little trying that I had to ask about price with each and every bra. I would prefer if she had said the prices straight off the bat. In fact, I was actually ready to purchase one bra she said was $53, but then later she double-checked and it was actually $60-something (which I wasn’t quite prepared to pay).

I ended up not buying anything, but didn’t feel pressured to do so at all. I’ve read a lot of stories of women feeling pressured to buy after a saleswoman has spent all that time with them. But when I said I was going to skip it, she just said okay, thanked me for coming in, and left me to get dressed. I think it helped that it was so close to closing time. In fact, I almost felt a little rushed, but honestly that was kind of what I was hoping for. I just wanted to pop in, see what they had, and pop out. I’ve no idea if the experience would be different on, say, a weekday morning when things are slower.

Later I checked the prices she had quoted me, and found that they pretty closely matched up with various online sources (barring a sale or coupon). It’s nice to know that they’re not jacking up the prices.

One last little complaint is that I wish Town Shop had more bras out on the floor for browsing. They don’t need to have all the sizes out, but it’d be nice if it were possible to browse at all. I only took a cursory look, but it seemed the only stuff on the floor was loungewear and robes—basically stuff that comes in sizes small-medium-large. I know bra stores have massive inventory when you consider all the sizes, but it’d be nice if they had a small, attractive display of the brands they offer, or even just the newest releases. Still, it was fun and a refreshing change of pace to walk into a store and be able to try on bras in my size!

As for the bras I tried, there were three Freyas, one Cleo, and two Panaches. I didn’t get the names of the Panaches because I didn’t like them, but they did fit better than I was anticipating. Aside from the sports bra, the last Panache I tried was the Porcelain molded strapless bra something like 4 years ago. It was so shallow and wide-wired on me that the wires couldn’t physically be placed under my breasts. It could only sit a couple inches down my rib cage. It was just about the worst fit I’ve ever had in a bra of the proper size.

These two Panaches certainly had too-wide wires, but the shallowness didn’t present nearly as much of an issue, I’m guessing because it wasn’t molded so the fabric was a bit more flexible. The gore was perfect—it laid flat, was just the right width, and didn’t stab my sternum. But the shape was quite east-west and somewhat minimized up top, so I still wouldn’t buy the brand.

The Cleo I tried was the Lucy. Normally I need to go up a band in Cleo bras, sometimes also a cup. This one was certainly extra tight, but again not enough that I would need a 30. If I were to buy it, I’d probably start out with an extender until it stretched a bit. The 28G cups also seemed a little small. But I’m not sure if they were actually too small or if the cups just didn’t suit me. They weren’t quite tall enough in the outer corners where the strap attaches so it seemed like I had a lot of uncovered side-boob. Otherwise the shape was the usual perfectly round orbs I’ve come to expect from Cleo. 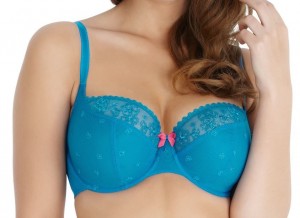 I next tried the Freya Gem and Rio, which were easily the best fitting Freyas I’ve ever tried! It’s no surprise that they fit so similarly since the Gem is actually based on the Rio cut, according to Freya’s website. Freya is known for giving a more natural, ever so slightly pointed shape. These two had the natural shape, but less of the pointyness. They also held me in really nicely on the sides, especially compared to the Cleo.

I absolutely love that the black Gem has a baby pink underlay. It turns a basic black bra into something special. For the Rio, I love the fishnet-like mesh on the upper portion. For both of these, the straps are unfortunately a bit wide. I’m still going to buy one of each at some point, but these straps are definitely designed for comfort, not looks. 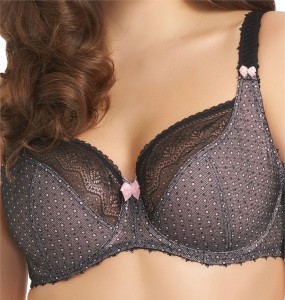 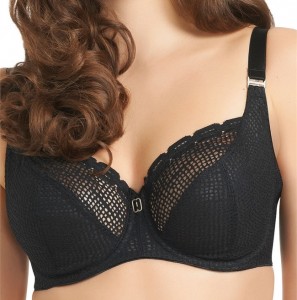 The last Freya I tried was the Ooh La La in black. I recall that it was a big hit when it debuted at CurvExpo. I didn’t think much of it at the time (I rarely care about black bras), but it was really lovely close up and on my body. The black isn’t quite as sheer as the photo looks. And the copper embroidered details are much more vibrant and sparkly. It made me think of Halloween. The semi-sheer black and sophisticated details make it really sexy but not trashy. Yet something about the fit just didn’t wow me. I couldn’t quite put my finger on it, but I think it seemed more compact and flattened than the others. 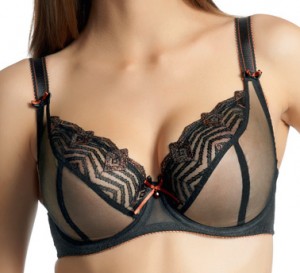