I’m so glad vintage-style swimsuits are in style right now. High-waisted bikinis and 50s-style one-pieces (and even tankinis) are super easy to find, and they are all right up my alley. This week I’ll be comparing three vintage-inspired one-piece swimsuits, one of which I’ve owned for years, one of which I returned, and one of which I just got recently.

First up is quite possibly the most unflattering photo of me ever taken! When I saw this Sundaes by the Seaside suit by Letters From Evie on Bravissimo’s site a few weeks ago, I knew I had to have it. Vintage style, bra-sized, ice cream cone print, and at a price that’s actually not bad (about $60)? Yes, please! With my extra long torso, one-piece suits are usually a bust for me because they’re rarely long enough. But the description of this suit says Bravissimo made the length longer after complaints that the last one from this brand was way too short, so I had high hopes.

Oh boy, was I wrong. I normally wear UK 28G, though often with Bravissimo I have to size up to 28GG. In swimwear, I often size up in the band because I don’t need as much support and especially want to avoid phantom back fat at the beach. So I went with 30G. 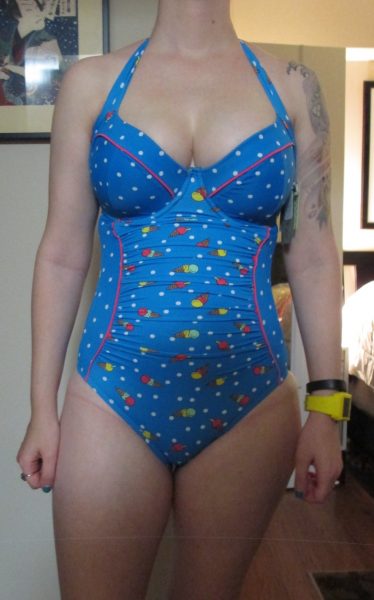 The cups are about a size too small. The length is also not quite right on me. The underwire is sitting low, enough that even yanking the suit up and tying the halter tightly can’t keep the wires correctly in place. I was also disappointed by how boxy the suit made me look. Something about the red piping and the tightness overall makes my waist look more straight up and down and less hourglassy. And worse (way worse) is what it did to my poor butt: 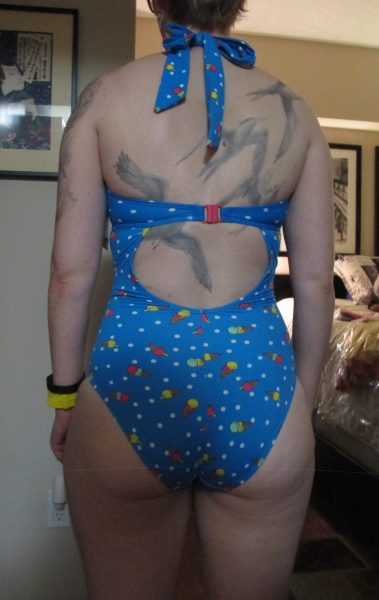 Aaaaaaaah. Okay, why is there only 50% coverage?? Real vintage swimsuits were cut generously in back, almost like shorts. But this—this is way too much visible cheek. And it certainly doesn’t help that the butt is waaaaay too tight on my thighs. It’s pinching along the seam like crazy and makes me look like a marshmallow! Not. Cute.

Now, I could have exchanged this for a bigger size. I’d probably need to go with a 32G (up one cup and one band from the size I ordered). But I was just so disillusioned by the fit that I couldn’t be bothered. I sent it right back to Bravissimo.

After discovering how tiny the butt is on this suit, I noticed that even on Brav’s listing, they don’t show a shot of the model’s butt. Considering that even the front shot looks like it might be pinching her on the thigh seam a bit, it makes me wonder if this wasn’t intentional. I mean, how can you sell a swimsuit without showing customers what the back looks like unless you have something to hide?

Now of course I really want an ice cream-printed swimsuit. I did find a few on ModCloth, but none are quite right for me:

Speaking of ModCloth, that brings me to my next suit, the Bathing Beauty One-Piece by Esther Williams. This suit comes in a ton of different prints, and many are available in plus-sizes too.

Super cute! Since ModCloth’s size chart is useless, I just went to the Esther website and looked at their chart. With 37″ bust and 29″ waist, it puts me between a 10 and a 12. Since MC has free shipping on orders over $50 and free returns, I just got both and planned on returning whichever one didn’t fit.

The 10 felt the best in the body. It sucked me in and held my boobs in place better than the looser 12. But once again my posterior posed a problem. A second look at the size chart places my 41″ hips between 12 and 14, it and looks like I really need a 14. Mercifully, even though the 12 is not really big enough, there’s at least enough coverage. The seam is very narrow and still cuts in, but certainly not as badly as the Brav suit.

Now, the boobs are their own issue. There’s actually a lot of space, so I’m not being squished. But I’m also not being supported whatsoever. This is an instance when my long torso (and my age, I suppose) is a boon, because although my boobs are hanging naturally, they still look pretty damn good! 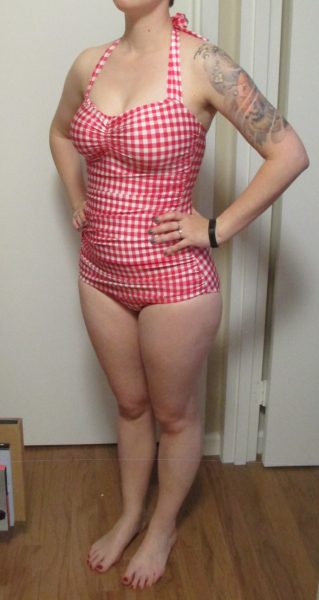 It helps that there are soft shaping cups inside. They don’t provide support, but they do aid in giving the appearance of a nice, round shape. 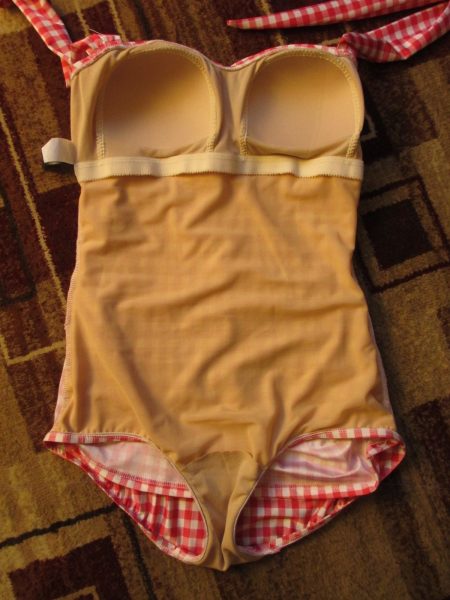 As you can see, there is also a band under the bust, but it’s not tight enough to actually stay under your boobs, so it’s just kind of floating there and it’s a little itchy. I’m hoping the itchiness will go away when I’m swimming and the suit is wet.

There’s also a piece of vertical boning on each side of the bust, which again doesn’t give support but does help keep the breasts front and center as opposed to east-west. 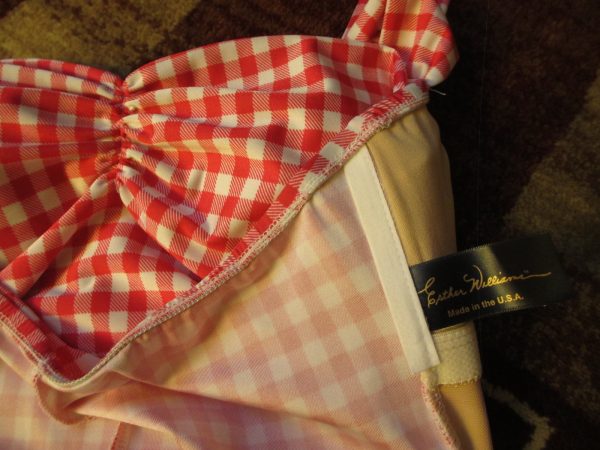 The back of the suit is just one layer of fabric, so I hope it doesn’t wear out too quickly. The front, though, has three layers for excellent tummy camouflage! There is a layer of tan power mesh on the interior, which you can see in the photo above, followed by a smooth, flat layer of the gingham, and finally on top there is a panel of ruched gingham. So you’ve got two layers helping to flatten you out and one layer to give that vintage skirted look and also hide any remaining lumps and bumps.

You know, the more I look at these pictures, the more I like this suit! Here’s hoping the weather is nice this weekend for the Memorial Day holiday, so I can go to the beach.

Finally, we have Old Faithful: The Nautical Bettie Suit from PinUpGirl Clothing in size Medium. This was my very first PUG purchase many years ago, along with the Natalie dress. I’ve since sold Natalie because I wasn’t wearing it very often, but I would never give up my Bettie. Once again this is a suit that comes in a variety of colors, and most prints are available in plus-sizes. For those who want to be extra modest, there are also matching swim skirts available.

Man, I love this suit! It’s just so perfectly vintage-looking. Unlike the last two suits, it has full coverage in the back:

The seams are so much more forgiving here. They’re sewn wider and are a single layer of fabric folded over once, whereas the Esther Williams seams have a flat piece of what appears to be foam rubber sandwiched in the fold. It also helps that this suit is essentially shorts, not bikini-shaped, so it’s not cutting across my butt cheeks at all. Though if you want to be a little flirtier, you can yank it up in back for slightly less coverage, like the PUG models do.

Bettie’s fabric is quite a bit thicker than that of the Esther Williams suit. The boob space is also less generous and the white band in back is gathered for extra tightness. As such, the boobs are held in place and feel more supported, but it’s compression-style support. It squashes your boobs and you have to intensely scoop and swoop to achieve nice cleavage and avoid a totally downward-pointing shape.

The bust portion is two layers of heavy duty swim fabric and the back and front are both a single suck-you-in layer, with the front topped by a second, slightly looser piece to achieve the skirted look and smooth profile. For comparison to Esther Williams, here’s an interior photo:

And here’s the interior of that gathered back band: 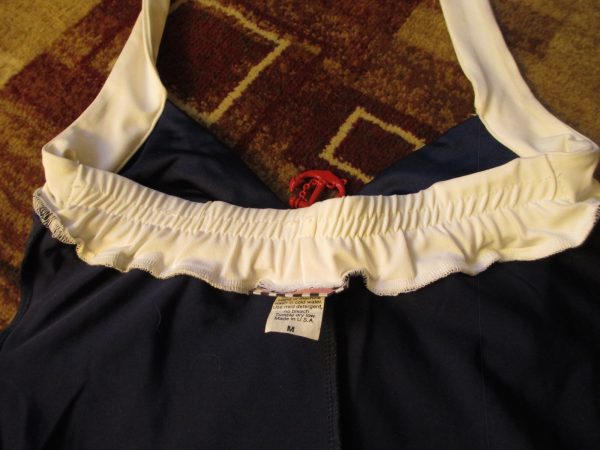 Even though Esther and Bettie fit differently, I really like both suits. Now if only they had underwire (or at least a tighter under-bust band), they’d be perfect!

1 Comment on Off the Rack ~ Vintage-Style Swimsuits from Bravissimo, ModCloth, and PinUpGirl Clothing