Leila is still on hiatus, but I’ve channeled her inspiration for today’s post. I’m not going to go into too much detail, however, because the last time I triumphantly wrote about a semi-successful alteration (creating a scoopier scoop neck), no one told me that they found it helpful! If you’d like to make similar changes to what I describe below and find my instructions too vague, please let me know and I’d be thrilled to fill you in.

After I shared this Spotted Brunia Henley blouse from Anthropologie with you, I wondered if I should have bought it and found a way to make it work, but the $80+ price tag was too much for me. 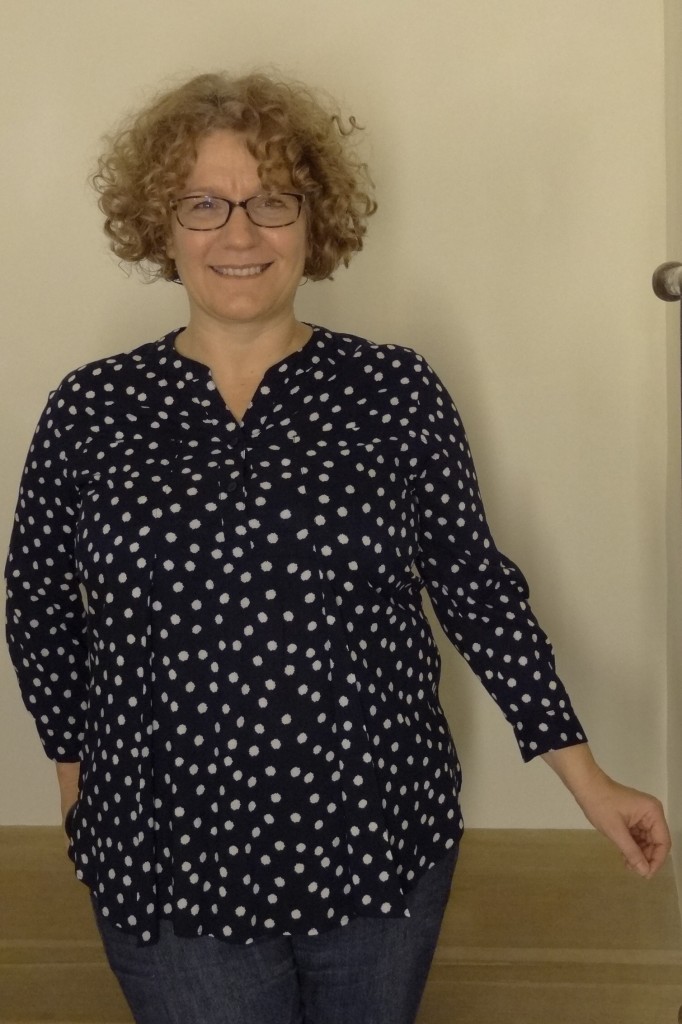 Then I got another chance when I found this Joe Fresh version at JCP for only $21. I liked its cheerful floral print on a navy background, and the XL barely pulled at my bust when I buttoned it, so I bought it.

Unfortunately, every time I wore this top, I felt disheveled and giant.Â  So finally this week I decided to see if I could do something about it. Here are the before pics (I’m wearing my Panache Idina in all the pictures). 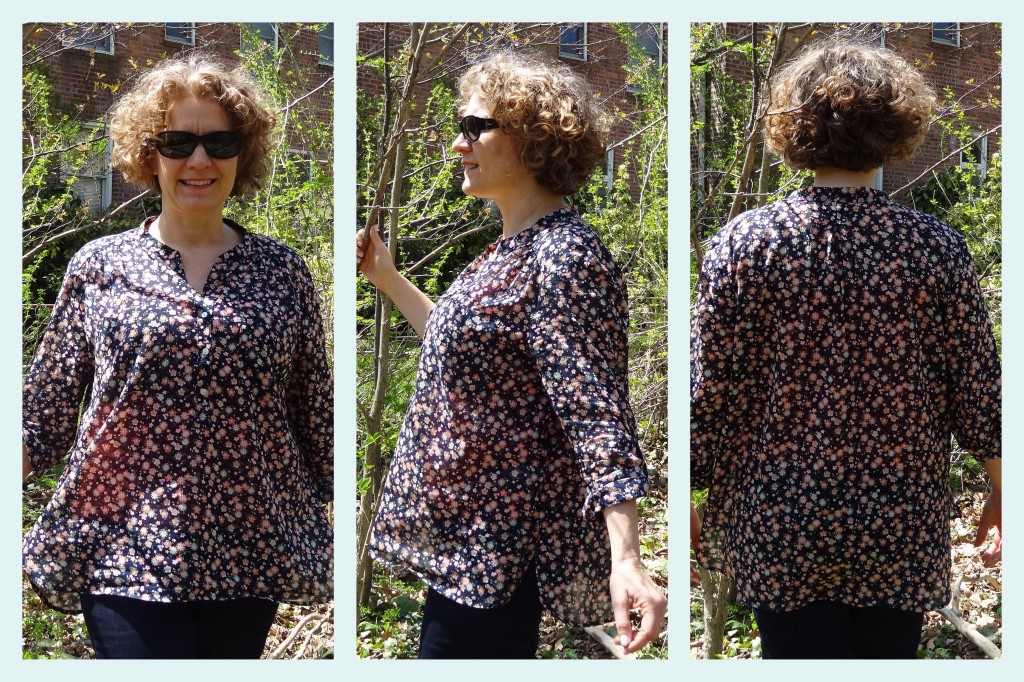 Here are the options I considered.

Option 1: Create a vertical waist dart from beneath my bust. Note the apron-like bottom that results. Later, I mention how I chose to address this. 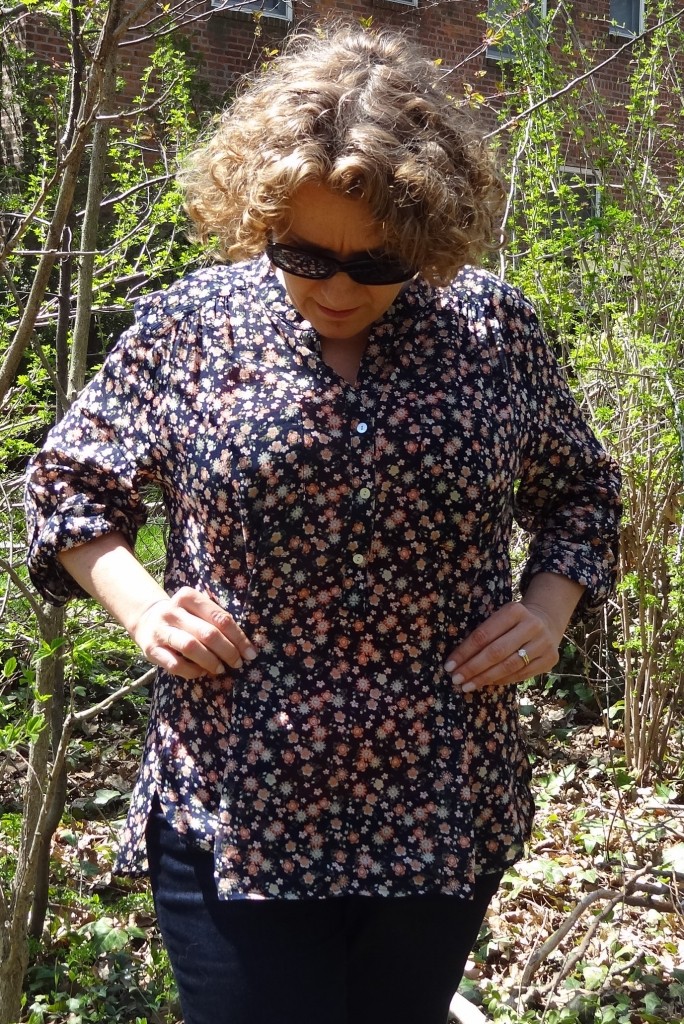 Option 2: Take in the sides. However, since the shirt doesn’t button all the way down, I wasn’t sure I’d be able to slip it over my boobs once I’d taken the sides in. 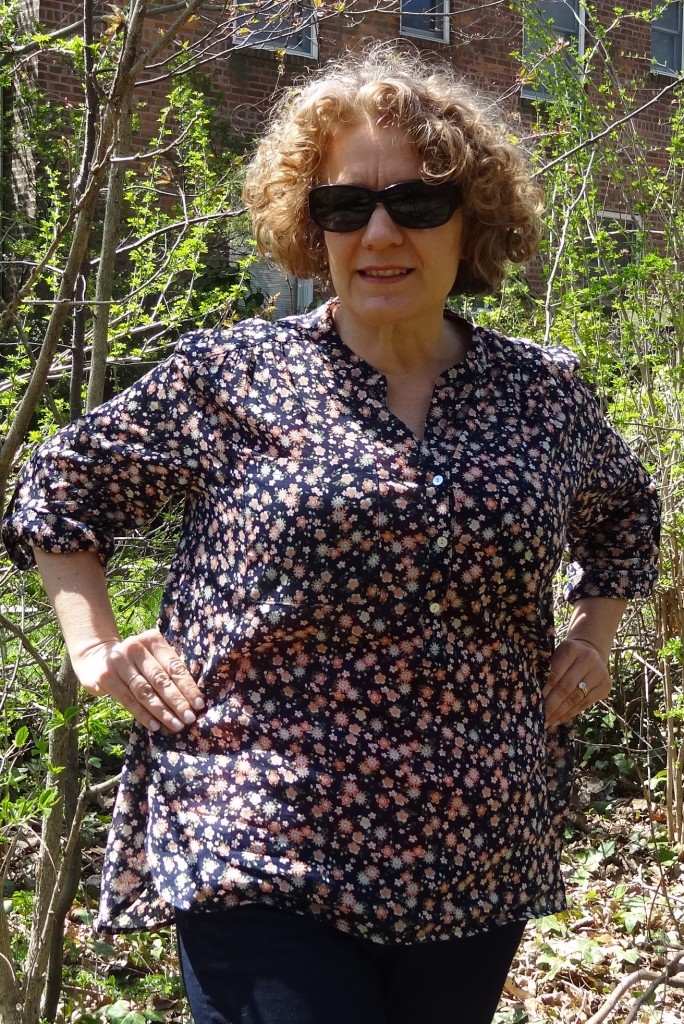 Option 3: Somehow gather everything in back (drawstring?) to create more of a waist. 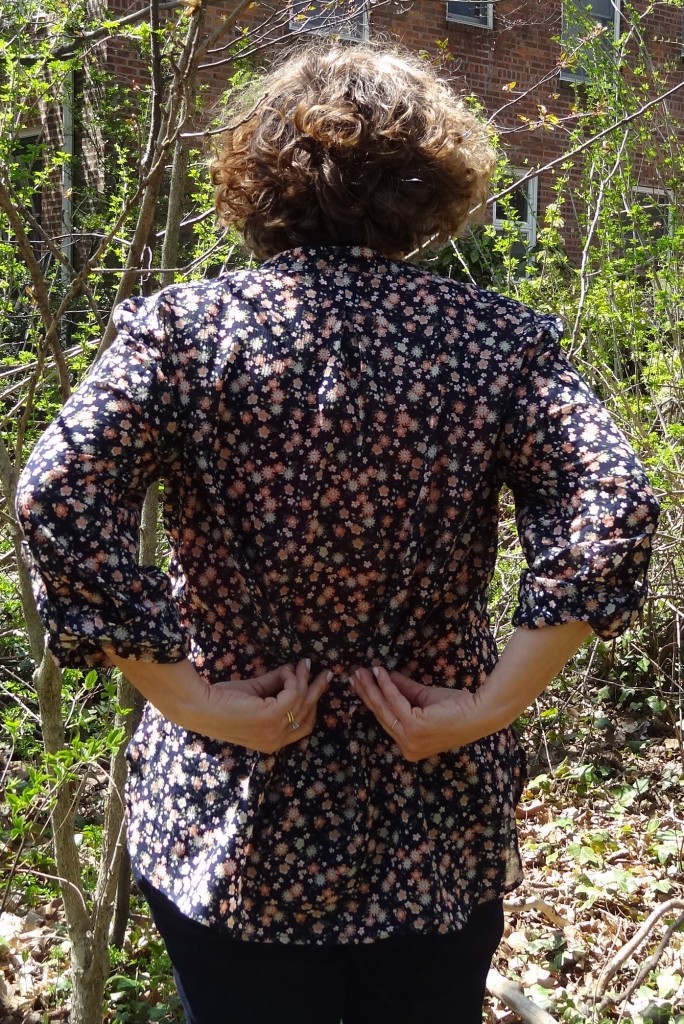 I decided to start with Option 1. While wearing the top, I pinned the darts where I wanted them to begin, took the top off, marked it, tried it again, and re-pinned until I was satisfied that both the left and right sides would be relatively equal. Then I removed most of the pins and used a fabric marker to create lines to follow. I debated whether to go straight down to the hem (yellow line) or curve back in before the hem (dotted peach lines). I decided to go straight down so that I could make sure the hem was even on each side of the dart in order to avoid the apron-like bottom that you saw in the picture for Option 1. Perhaps the hem would have been level even if I’d curved back in, but I’m not experienced enough to be sure, and it seemed kind of flouncy when tried it on with the pins curving in. 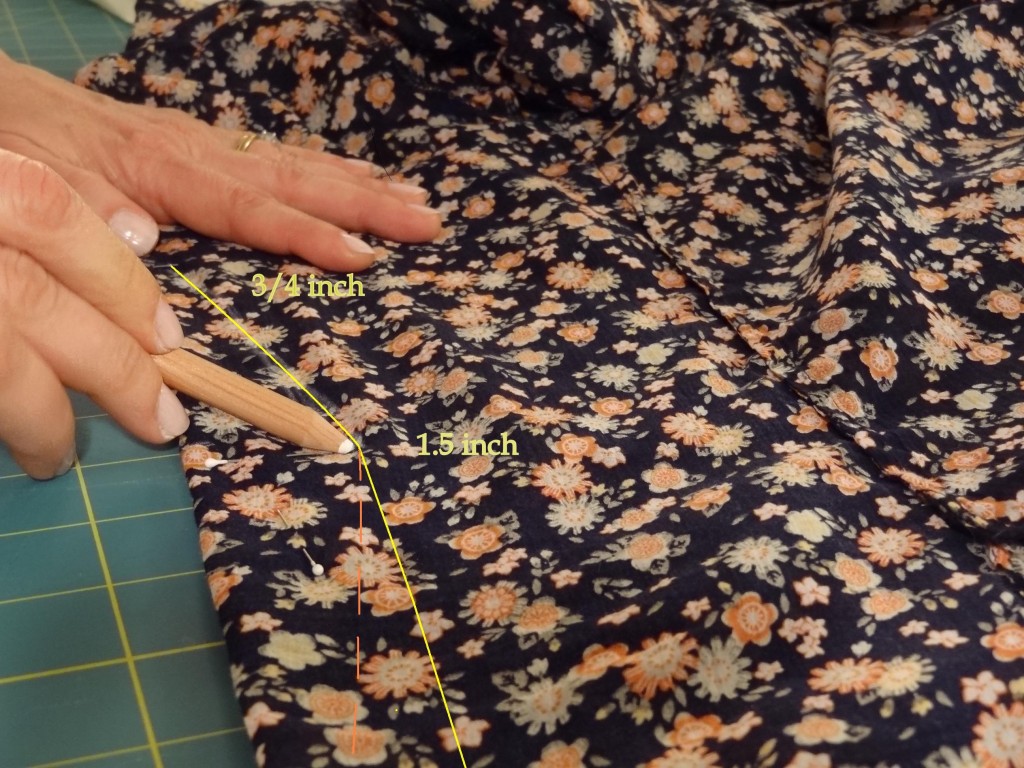 Normally I would try to begin the dart at a gradual point beneath the bust, which is what we do with Campbell & Kate shirts, but here I simply took in an abrupt 3/4″ at the base of the chest pockets, making sure to match the seams at the bottom of the pockets. This resulted in an inverted poufiness at my breasts, which was great for keeping enough room for my breasts but looked just a tad strange. So instead of ironing the darts to one side, I ironed them down the center and tacked the top of the dart with a short seam perpendicular to the rest of the dart. You’ll still see some of the poufiness in the right side after picture below, but it doesn’t bother me. If I were really ambitious, I could have removed the pockets, made the darts, and either re-attached the pockets over them or left them off entirely. 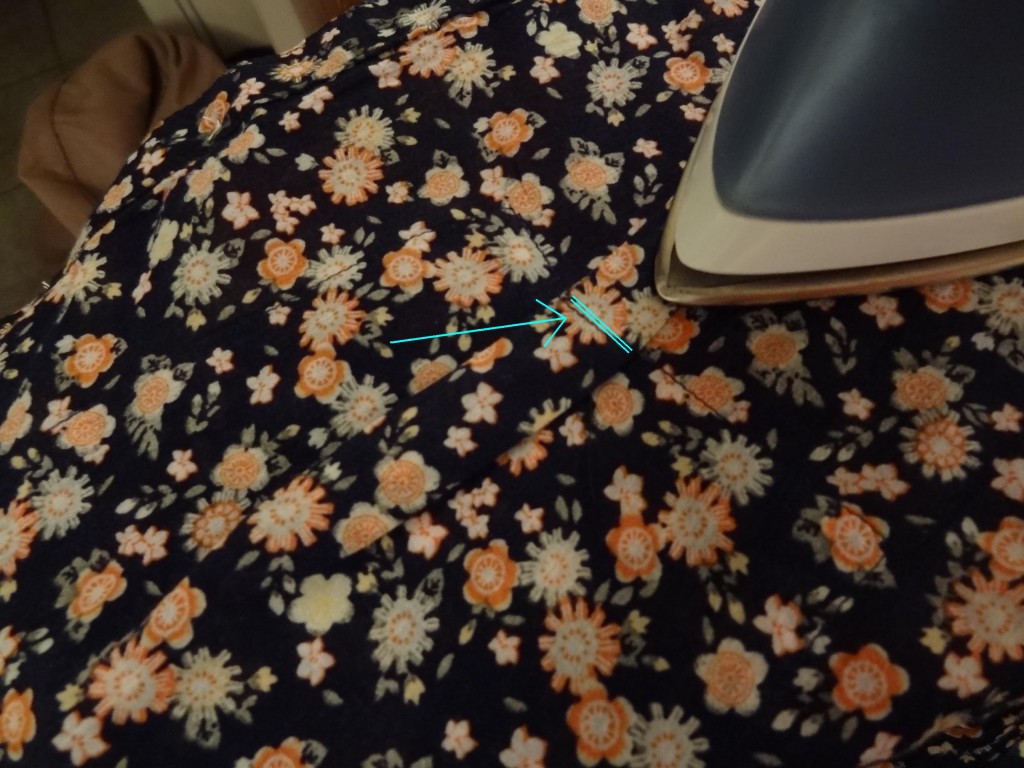 I also cut the sleeves off to my elbows and trimmed the back bottom to match the front. No hi-low for me! Here are the final results. 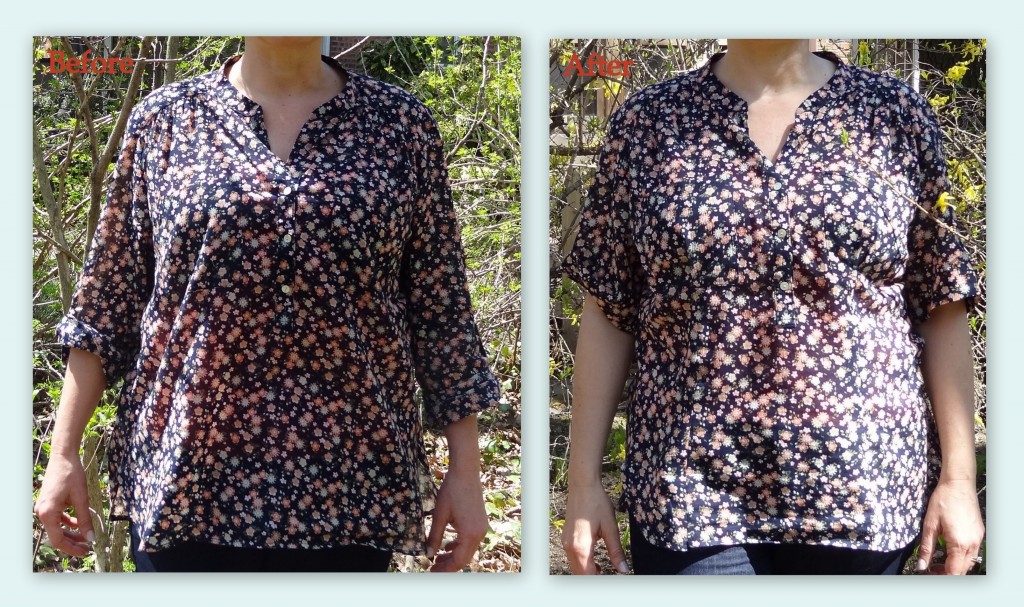 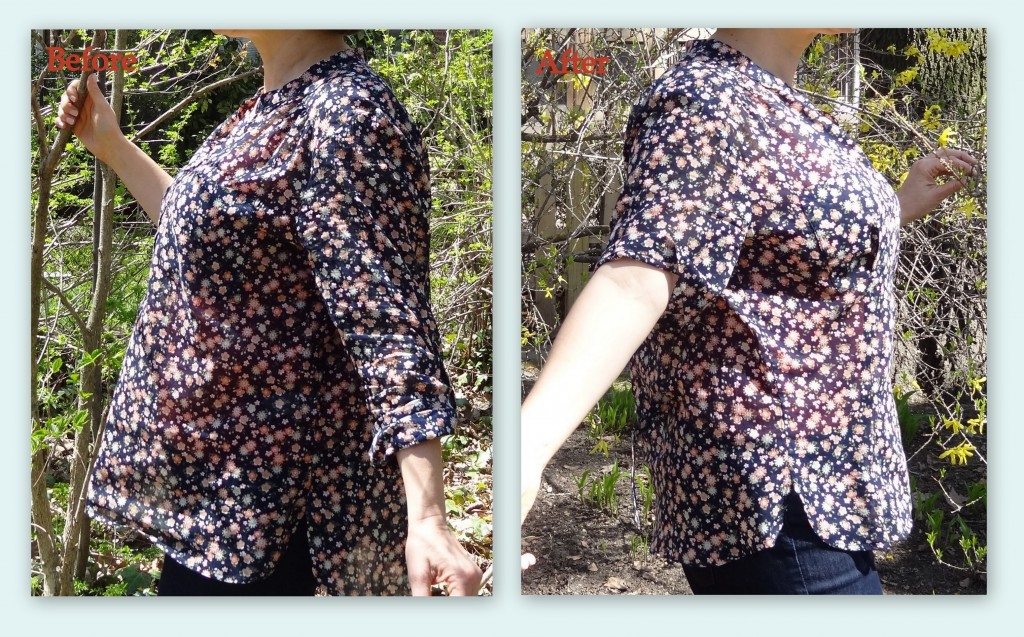 Even though I’m pretty happy with the results, I’m not positive that a Henley top is ever going to look as good on a short, full-busted woman as it will on someone who is taller or smaller-busted. I need to experiment with proportions and accessories. If I learn anything, I’ll let you know.

Finally, I also tried Option 3. There were tabs on the sleeves that were meant to keep them rolled. I cut the tabs off and sewed one end of one tab to the right back of the shirt, and I planned to button the other end onto the left (this way I would be sure to have enough fabric width to slip the whole thing over my boobs). Once I safety-pinned the button-end to where I would have put the button, however, I didn’t like the result. It seems to be a curious case of both over- and under-fitting at the same time. Instead, one of my future experiments will be with belts.

6 Comments on Another Experiment with Full Bust Alterations: All That Extra Fabric