Here comes Part 2 of my winter 2014 CurvExpo coverage. This week I’ll be sharing with you some of the new things I discovered. Next week will, finally, be the “old favorites” image dump I’m sure you’re all waiting for…

First up is something a little saucy—the brand Bordelle. A British company that’s been around for five years, it can currently be purchased in New York at Journelle and La Petite Coquette, as well as online at Nancy Meyer.

Bordelle’s rep told me their concept is to combine ready-to-wear with traditional lingerie. It incorporates elements of S&M, but “in good taste,” in a “tongue-in-cheek” manner.

I have to agree with the “tongue-in-cheek” descriptor. These pieces all have a sense of prettiness to them and some could be worn as outerwear or underwear. Even though the S&M influence is obvious, they don’t seem “hard.”

For us busty ladies, unfortunately the bra-style pieces only come in Small, Medium, Large with no regard to cups. But most of the backs are fully adjustable, made up of rows of straps that are similar to conventional bra shoulder straps.

There were also quite a few pieces that didn’t incorporate cups at all, so those would perhaps work better. With some of the strapping poking out of a low-cut shirt or a tube top, you’d achieve that ever sought-after Marlies Dekker look, only a little more extreme.

Next up is something for the men in our lives (or those of us who like to lounge in men’s underwear). One of the nicest and most exuberant brands I talked to was PSD (Pant Saggin Dezign), who waved me over when I stopped to stare at their delightfully bright, patterned men’s boxer briefs.

Here are my two favorite prints: 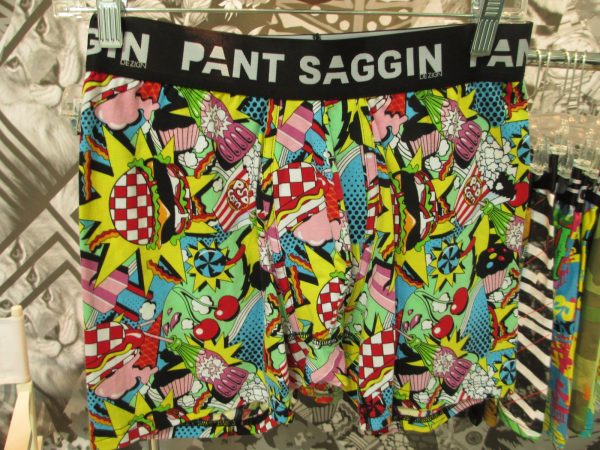 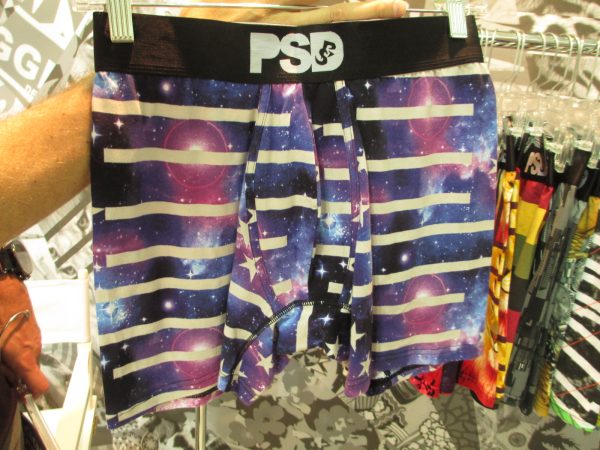 Made of 95% cotton and 5% elastane, the fabric felt really smooth and soft. They’re printed with “reactive ink,” which apparently achieves the brightest color and crispest print until you advance to digital printing. Additionally, this type of ink means that the white bits of the prints glow under a blacklight. I was assured that it doesn’t glow through fabric, even light colors, but it makes the underwear exceptionally popular at glow parties in gay clubs.

What I really enjoyed learning is that PSD has a close relationship with professional athletes and sneaker companies. I don’t think I’ve ever mentioned it here before, but in addition to my lingerie obsession, I’m also a bit of a sneakerhead.

PSD has partnered with a number of star athletes, some of whom are minority owners of the company. Some of the underwear prints match the athlete’s sneaker, or recreate a detail of the sneaker, like the print of the sole lining.

Appropriately enough, PSD underwear is available in a lot of sneakerhead boutiques. They’re sold in Tilly’s, Shoe Gallery, and Jimmy Jazz, and they’ll soon be available online at Journeys.com and Karmaloop.com.

Back to the women’s side of things, an underwear brand I became absolutely enamored with was Empowered By You. Cheesy name, yes, but there’s a good reason for it. Twenty percent of all profits from EBY go to the Seven Bar Foundation, which provides microfinance loans to women to help them create or grow their own businesses.

All of EBY’s products and marketing make the foundation a centerpiece. The color-on-color graphic print on the panties reflects the ladder logo of the Foundation and every single underwear package has a story printed on the back of one woman who was helped by the Foundation.

As for the underwear itself, it’s a great product! They’re seamless panties that come in a low-rise thong or low-rise full-coverage bikini. The moisture-wicking fabric is made of nylon and spandex with cotton lining. And there’s a strip of flocked fabric along the inside of the waistband to help it grip your skin and keep it in place without digging in. I’m also a big fan of the graphic print. It looks cool and modern, but is still quite subtle.

EBY gave me a pair to try, but unfortunately I chose the wrong size. I waffle between medium and large, and they suggested a medium, but I definitely needed a large. It didn’t quite cover the back of my rear all the way, so I almost had some plumber’s butt going on. That being said, the fabric felt divine and it did not cut in at the leg holes at all. I definitely plan to buy some pairs in large. I do wish they offered a mid-rise bikini, but maybe they’ll add one someday if there’s enough demand.

At $26 for the bikini and $22 for the thong, they’re not exactly cheap, but I’m getting really tired of crappy cotton underwear with elastic that digs in and fabric that rides up my butt through the day. So I think it’s time I invest in some higher quality yet still machine-washable options.

Returning now to our usual topic of BRAS, let’s check in with newcomer Sunday Intimates. For a stellar overview of the brand, I’m going to send you to Miss Underpinnings.

As for the upcoming collections, there are some lovely new prints that will be available as briefs, high-waisted briefs, a nightie, kimono, bed-jacket, longline bra, and slouchy pajamas.

Though the theme of the Fall/Winter 2014 collection is officially film noir, many of the new prints strike me as being rather Asian-influenced:

There was also a great menswear-inspired pattern and the awesome leather-look fabric you see in the bra and panties above, shown here as a longline:

As for availability, Sunday Intimates have yet to find a stockist for their bras, but their sleepwear is carried by ModCloth, and they said they’ll be launching their own e-commerce site very shortly (maybe even this month!).

Finally, the last brand I’ll share with you is Curvy Couture. It’s more of a full-figured brand, with bands from 34-44 and cups from C-H. Wait, H cup?? Fabulous! Oh wait, it uses American sizing, so that’s actually not that extensive. American H is equivalent to a British G.

However, I was impressed with their line of shapewear, called Cool Smoothies. Unlike Spanx and similar shaping garments, Cool Smoothies are not intended to make you look thinner. They’re simply meant to smooth everything out and give gentle shaping that doesn’t fight against your actual shape.

Made of what the brand calls “windcool,” the micro-mesh-looking fabric is antimicrobial and breathable so it won’t make you sweat. I was told that the yarn is mixed with minerals to help keep your skin cool. It’s also stitched to minimize fabric overlap to assist in the breathability and smoothing effort.

What I personally noticed was the amazing contoured seams all over the pieces. Here’s a model showing this off:

I’m not usually one for shapewear, but this style is something I could definitely get behind. Sadly, I don’t think it’ll come in my size since it’s a full-figured brand.