Today’s post isn’t big-bust related because I couldn’t get the bobbin winder on my new sewing machine to work in time to finish what I really wanted to write about, which is how to make a scoopneck L.L. Bean tee even scoopier. Instead, I’m going to follow up with an experiment I mentioned in April about extending my legs.

I’ve been wearing the black Naot sandals in the photos on the left for longer than I’ve been writing this blog. You’ve probably wondered, “When is Darlene going to buy a decent pair of sandals?” This year, as it turns out! It took half the summer, but I finally found a pair of Fly London sandals that fit my orthotics, sort of match my skin tone, and even give me some height. I feel more put-together when I leave the house in my new sandals. 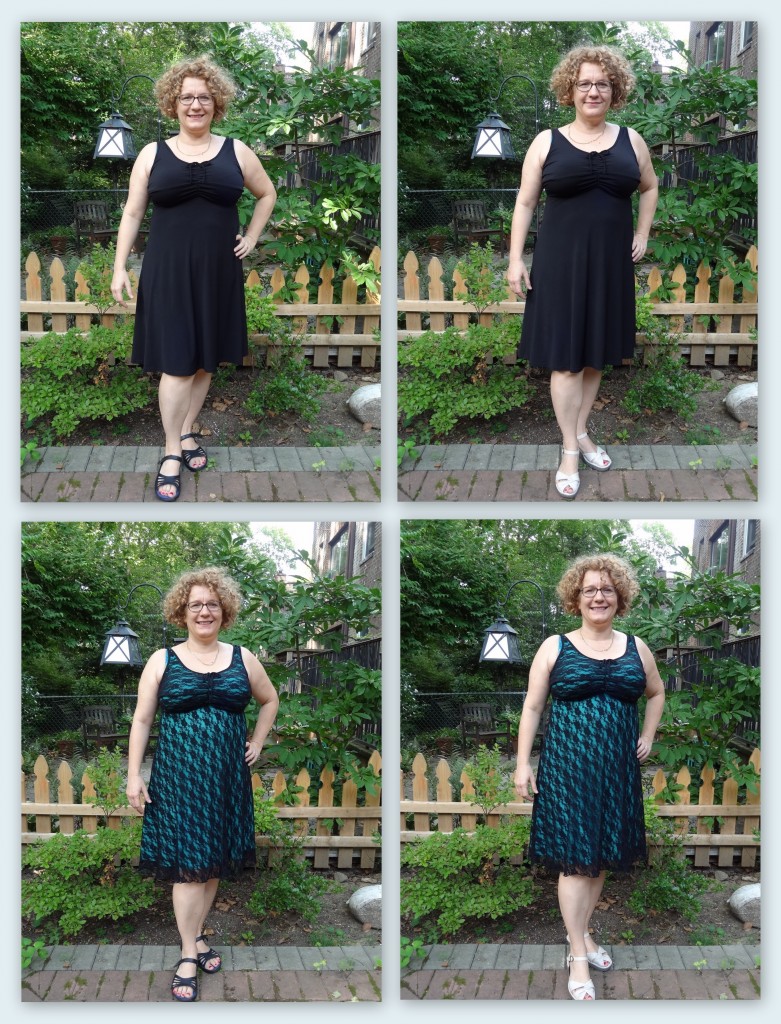 However in studying these photos, even though there is a difference between the left and right columns, I don’t think that the photos on the left look as bad as I felt like I looked before I bought my new sandals. This raises an interesting question: How much is a detail worth? Ideally, it should only be worth whatever we can afford, and it shouldn’t cost us our sense of well-being if we can’t afford it.

There are a lot of resources, including Hourglassy, that tell us how to dress, and it would take an unlimited amount of money and time to follow every tip, rule and suggestion. Since money and time are limited, it’s up to us to prioritize. If a particular detail doesn’t make the cut–say I had to choose a well-fitting bra over more flattering sandals–I shouldn’t allow my inability to wear more flattering sandals cause me to feel bad about myself.

That’s the ideal. In reality, however, it takes comparison photos like the ones I’ve posted today to realize that when I spend any angst on details that I can’t afford, I’m paying more than they’re worth.

I can’t resist exploring an application of this principle to the world of D+ bras. Each of us knows at least one woman who is running around in ill-fitting bras because she “can’t afford” one that fits. Personally, a well-fitting bra is one of the most important details I can think of, especially because right now I only have ONE bra that fits, an amazing Cleo Alexa in 34H that I bought from a reader last month. Because I can’t wear the Alexa every single day, it’s a big challenge to get dressed the day after I’ve worn it–it’s literally a let-down to revert to one of my stretched-out bras. If there’s one detail thatÂ almost justifies a bad mood, it’s a poor-fitting bra. But is it really worth the angst? I’m tempted to say yes! It’s that angst that is pushing me to go bra shopping tomorrow (I’m going on a field trip to Zoe & Co. in Westerly, RI; does anyone who lives nearby want to meet up?). It’s hard to believe that anyone who has experienced the dramatic difference between good and bad fit would ever fail to make it a priority. Yet there are women who do, and I need to respect their decision in the same way that I want them to respect my choice of sandals.

4 Comments on Details Make a Difference