It’s been a Love Claudette-filled week for me. First flash sale website Ideeli.com had the brand on sale for a whopping 60% off! Then I found a sneak peek of Love Claudette’s August/Winter 2013 collection on LingerieInsight.com.

You can see Claudette’s soon to be released Spring 2013 collection in my post from last August’s CurvExpo NY. As I noted there, while Claudette’s current offerings start at a 30 band, as of the spring collection, they’re going down to a 28. Additionally, in the near future (there’s speculation in the blogosphere that it’ll be as early as fall 2013) they’ll go from offering maximum G cups up to K cups.

While there are plenty of items I’m interested in from the forthcoming spring collection, I still really, really want one of the neon bras from their first release, which start at 30 band and top out at G, even though I know the 30 will be too big on me. So I bought the neon green Dessous and neon turquoise En Dentelle from Ideeli. Unfortunately, the expected ship date isn’t until at least January 29, so it’ll be a month before I can review them. But in the meantime, I’ll drool over the gorgeous A/W13 offerings:

First up is this royal purple stunner. I believe it’s the “Sophia” bra, which I saw in “papaya” in August. If I was excited over the fiery orange-red back then, well now I’m double excited about this super saturated grape—especially with the black trim. It makes me think of an evil fairytale queen.

As a side note, I’m not really a fan of this “sexy” theme going on in the photos. I much prefer Claudette’s fresh and airy-looking photo shoots of the past, without men or awkward posing. 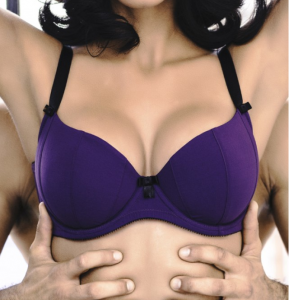 There’s also a balconette version with light purple details instead of black: 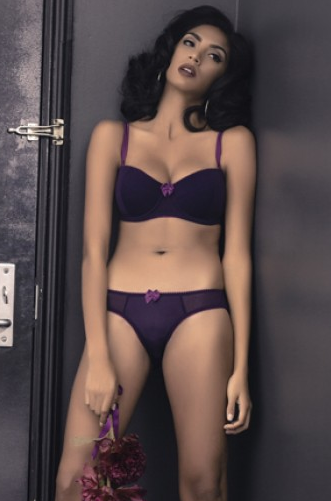 The other set that I absolutely must own, and which is different from anything I’ve seen from Claudette before, is this light pink and black choice: 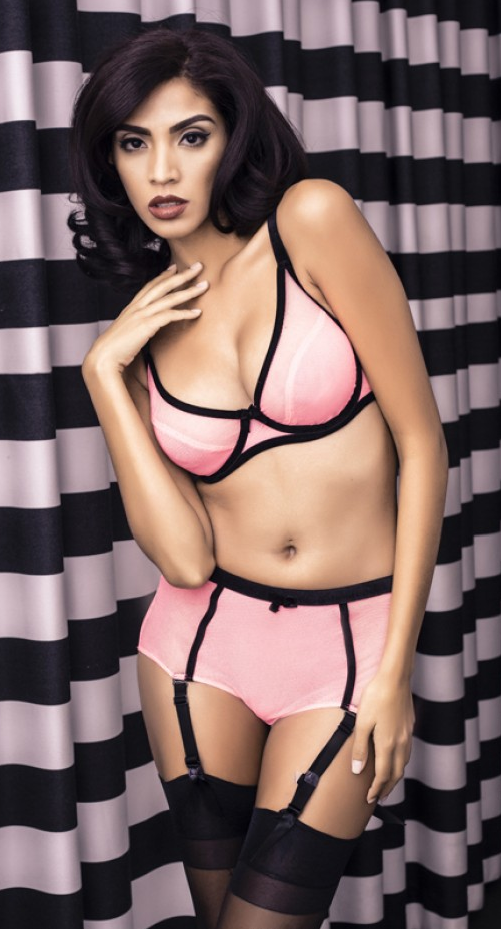 The colors scream retro, but the lines and shape are so sleek and modern. I absolutely adore it, and I’m glad to see the brand expanding their looks. I did see some pale pink and seafoam pieces in the new “Paramour” range at the last CurvExpo, so this set may be part of that collection.

I can’t wait for the next Expo in February, so I can see even more! If you want to view the complete A/W13 sneak preview, click the LingerieInsight link in the first paragraph.