Another mixed review coming your way. This week it’s the Bravissimo “Satine.” Specifically, I purchased the “Oh So Kimono” colorway, which is currently on sale. It’s also available in black, ivory, and another seasonal floral pattern. 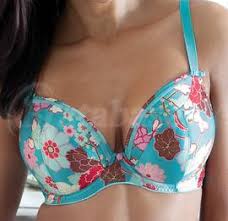 I’d had my eye on the “Oh So Kimono” for a while because I love the color and pattern and it’s 34% cotton, so I was thrilled when it went on sale and immediately snapped up my usual size of 28G. I wear 28G in all other Bravissimo brand bras and most of the reviews say it runs true to size—but that wasn’t even close to true for me.

The cups of the 28G were laughably small, by what appeared to be more than one cup size. I was pouring out the sides and my cleavage was mashed together in the center with major quadboob. Unfortunately, the 28GG was already out of stock, but the G was so small that I thought I might need a 28H anyways, so I went with that.

The 28H is definitely the right volume for me. There is no gaping and it’s even quite forgiving on my smaller side somehow. The shape it provides is absolutely perfect: very round with a majorly up-front profile. It doesn’t give the oomph-type cleavage of, say, a Freya Deco, but it still makes my boobs look quite large (which I like) due to the roundness and perky profile.

Additionally, GG and up cups have three hooks instead of two, and this makes the band feel much more secure than the G did. I was actually a little put off by how stretchy and unsupportive the G band felt, and the H band is a vast improvement. It feels much tighter and sturdier.

However, while the wires of the 28G were just right, the 28H wires are massively wide! On the outer edges, the wire is placed nearly two inches outside where my breast actually stops. If I lift my arm up, it almost reaches to the same longitude as the back of my armpit. That is ridiculous! I like the bra enough that I’m going to keep it, but after wearing it all day, I must admit that the wires get to be very uncomfortable. It’s not so noticeable when I’m moving or walking around, but after sitting at a desk for a few hours, the outside of the wire felt like a vice pressing against my poor rib.

In fact, when laid flat, the wires measure 14 inches across while the rest of the band is only ten (five inches of band on either side). What the heck?? No one’s boobs take up more than half the circumference of their entire ribcage!

I realize that I have particularly narrow breasts, but this is just excessive. My breasts do not stretch all the way around under my armpits! They are on the front of my body, and as such, the wires should also be on the front. There should never, ever be more wire than there is band on a bra.

I feel that this is a serious problem across numerous manufacturers. As you go up in cups, regardless of whether your band is still the same or even getting smaller, the wires get substantially wider while the cup depth only goes up incrementally. What should really happen is the opposite: the wire width goes up a small amount and the depth/volume of the cup goes up substantially.

It’s to the point that I wonder I should start buying bras in a band or two bigger than my real size so I can get a smaller cup letter, ergo a narrower wire. I can always sew the band to be smaller, after all, but I can’t shrink those damn wires.

1 Comment on Off the Rack ~ Review of Bravissimo Satine