I think I may have an addiction.

Since my cup size bumped up another letter about eight months ago, and I got a new higher-paying job five months ago, I’ve been on a major bra-buying spree. First I replaced a bunch of bras that I already owned with the correct size. Then I discovered that contrary to my previously held belief, non-molded bras are great, which apparently means I need a ton of them. Then I decided I wanted more bright colors in my repertoire. Then I went to two CurvExpo trade shows and left both with a shopping list of bras I must have the moment they’re available.

I have eBay reminders set to email me daily for my size in Cleo, Fantasie, Shock Absorber, Curvy Kate, Freya, my Freya sister size, and a year-old La Senza bikini that I desperately want. And I get email newsletters from Figleaves, Bravissimo, Her Room, Lion’s Lair, and Bare Necessities.

I just got another new bra in the mail last week, have an exchange on its way from Bravissimo, and two from eBay UK that have reached NYC but have been languishing in customs for three weeks (because the US Postal Service is the worst—give me my bras, damnit!).

I have basic bras:

I still have a few bras that no longer fit sticking around, because they’re too old to replace but I love them so much I just can’t bear to get rid of them:

I even have a stack of bras that don’t fit well waiting to be sold or donated! 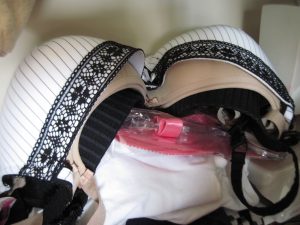 Yet despite owning far more bras than necessary, I keep buying more! I rotate out ones that I’ve grown bored with or have decided aren’t a perfect fit for others that are cuter or fit better. It’s getting to the point that all I have left are well-fitting, cute bras—but my eyes still light up every time I get a sale email from Figleaves or find a good deal on eBay. It’s a fight to keep myself from clicking “buy” every time.

I can try to justify it with the knowledge that big bust bras don’t last that long, but when you’ve got more than a week in between wearings of a bra, it is going to last a long time! And though my finances are in better shape than they were twelve months ago, my money could definitely go toward more important things (like a new laptop, which I do actually need). Though thanks to Hourglassy, I can at least use bras as a tax write-off.

How many bras are too many? How many do the rest of you own? Do you ever feel like you have enough? And does anyone else start to feel guilty after a while when you’re spending upwards of $50 for a piece of underwear? I rarely even pay that much for shoes—and I’m even more of a shoe-aholic than I am a bra-aholic!

7 Comments on Off the Rack ~ The Never-Ending Bra Collection