Welcome to the fourth Corporate Curves Report. This week is about women who are comfortable leading from a place ofÂ  authenticity.Â  The post is inspired by Darlene’s recent Campbell & Kate blog post, â€œBusty Women and the Power to Be Ourselvesâ€ and her statement about it being interesting to see what happens to corporate and political dress codes when women stop trying to act like men.

As you know, Iâ€™m from northern Europe and specifically from Finland where weâ€™ve had a female leaders in just about all governmental positions, including the presidency. In general women are considered equals, and we are ranked equally with men when applying for jobs, although there are some issues that still need fixing, such as women’s pay still being lower than men’s on average.

I have noticed especially when looking at our female government leaders that something has changed, and after reading Darlene’s post I realized it is how they walk, talk and dress. They look like women and not women wearing men’s suits. Nine of our government’s current 19 Secretaries are women.Â  Here are photos of eight of them.Â  (Further down in this post you’ll see some former Secretaries and current members of Parliament showing their very busty styles! And me as well.)

A lot of power comes from red it seems.Â  It seemed to be a very popular color when I looked at pictures of women in power. These women from top left, Secretary of Treasury, Secretary of Interior. Bottom left: Secretary of Municipal Affairs and Secretary of Justice.

I have also been studying what women are wearing today at the office and can see only a few suits, mostly dresses or trousers with various styles of tops and people really expressing their style. I just saw two coworkers walk by, one wearing a romantic white dress and one in an edgy black and white print dress. Have we really stopped dressing and acting like men? In our generation it is starting to seem like it.

We are comfortable being women and donâ€™t feel the need to prove anything just because we are women. Iâ€™m quite amazed by this revelation. Can it really be? Even my Finance Director “Legally Blonde” type friend wears what she pleases. She uses a lot of pink and edgy tops with pencil skirts or neat pants. Here are some of my own work styles.

Itâ€™s been long time coming, but our generation has been taught that we are good as we are, and if weâ€™re true to ourselves we can achieve whatever we want. I suppose that has stuck in our subconscious. Thank you post-War little girls that are our mothers!

Iâ€™m always very intrigued by cultural differences–especially about women in work life–and now that social media is blooming, there is a sisterhood of women around the world who are united by knowing what it feels like to be well endowed.Â  I am very interested to know whether you see these clothing changes in the women leaders in your own country? Is red a universal power colour? Do they use colour or wear the types of clothes seen in this post? When I think of American females in power,Â  the first to come to mind are Hillary Clinton (who sometimes uses Finnish designer Marimekko’s clutch bags), Condi Rice and Oprah Winfrey.

Finally, here are a few examples of well-endowed Finnish women in power. Our former long-time Secretary of Agriculture was a very down to earth country lady who spiced up her figure with plenty of color and did not mind showing some cleavage. 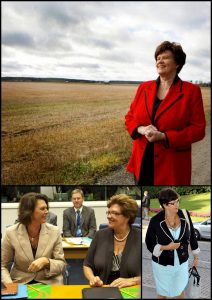 Here is our former Secretary of Culture and now a Parliament member. She was Miss Finland in her youth. Beauty with brains in her case. I like her style quite a lot but would make a few changes myself, although I am also a fan of turtleneck tops in the wintertime. 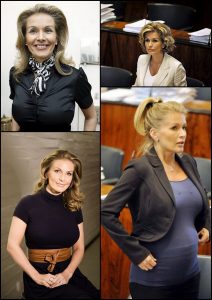 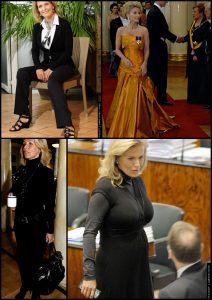 In the picture above where she is wearing her well-fitting ball gown at a presidential Independence Day gala, you can see our former female president shaking hands. Conan O’Brien was said to look like her so he made some “adverts” in his former Late Night show for her when she was running for re-election. She won, but I’m not sure how much Conan helped. It was funny, though.