Did anyone catch the U.S. TV station TLC’s episode of “Strange Sex” on June 15? It was about a woman who has the largest natural breasts in the world, Annie Hawkins-Turner. I actually missed the episode (and there are no re-runs airing in the next two weeks, according to my DVR), but caught an interview with her on Dr. Drew‘s talk show.

Annie wears a 102ZZZ bra size. Whether that size is accurate or not, her breasts are, indeed, enormous. She suffers from gigantomastia (also known as hypertrophy of the breast), which is characterized by rapid and/or prolonged breast growth. In Annie’s case, she says she got her first bra in third grade and just kept growing (and is still growing today). 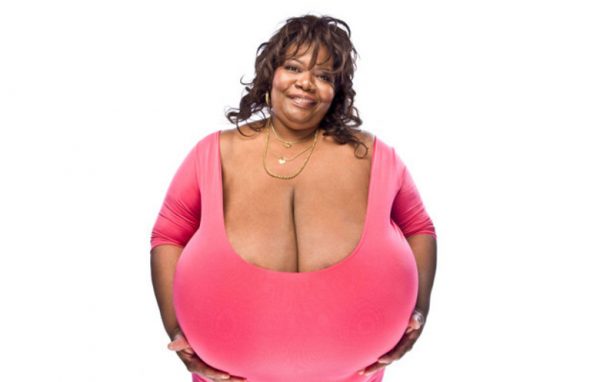 It is almost shocking how positive this woman is in regards to her body. In a three-minute preview of the episode, she says she’s never considered surgical reduction. “Why fix something that’s not broken?” she says.

Indeed. The Dr. Drew interview also included a plastic surgeon who was absolutely incredulous that Annie doesn’t want a reduction. She told him she does not have back problems and that she is not worried about breast cancer any more than any other woman (in fact, she said she had just gotten a mammogram and there were no anomalies). Yet the surgeon was still pressing the issue.

It made me want to scream “shut up!” at the TV. It’s ridiculous that large breasts are treated like such a horrific thing. Big boobs are not a fate worse than death! Breast reduction is a serious surgery; and as with all major surgeries has the potential for serious complications. I couldn’t believe this guy was still advocating it despite Annie saying she had no health problems and was not interested in “bringing a knife to herself.” No doubt it’s the right choice for some women, but the women who choose not to get surgery shouldn’t be treated like they’re crazy.

I find Annie’s acceptance of her body to be really refreshing. She even has a sense of humor about it, working as a fetish model under the name “Norma Stitz” (a play on the phrase “enormous tits.” Ha!). I really hope TLC airs a re-run of the episode soon, because I want to see the whole thing.