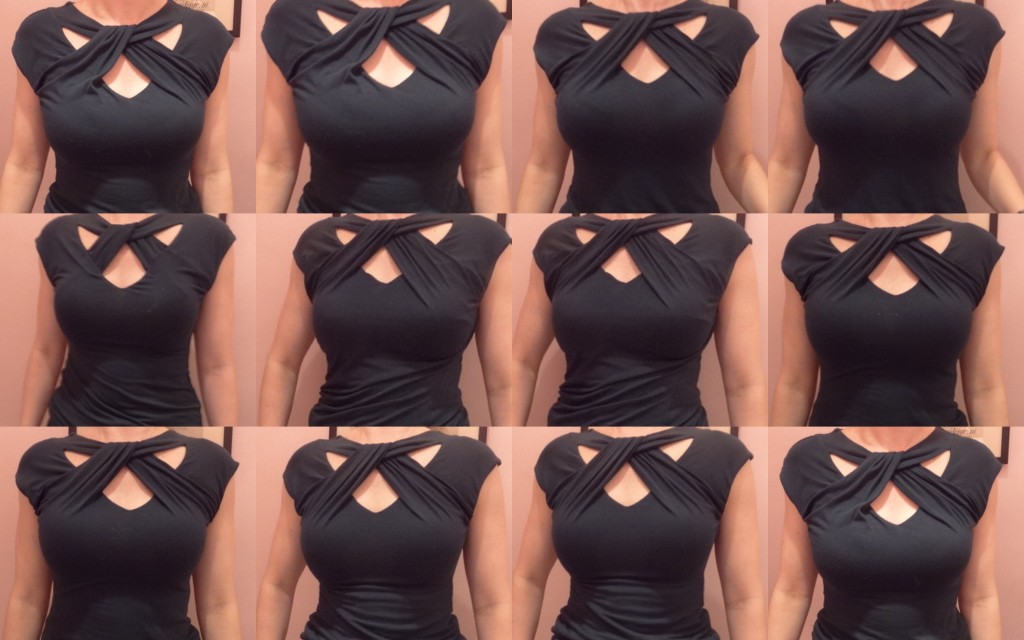 Some may consider our bra fitting obsession a curse, but I’m happy to report that after bra shopping with my friend Tina on Sunday, she said, “It would have been a different experience if you hadn’t been there. You definitely added value.”

Here’s what I think I contributed: a critical eye and a willingness to ask questions. For someone like Tina, bra shopping is a chore rather than an adventure. If an expert puts her in a bra and tells her that it fits, that tends to be the end of it. Unfortunately, once she tries to replicate the fit at home, it doesn’t work–it’s like that great salon hairstyle that we can never recreate on our own.

In Tina’s case, it was the Chantelle 3086 that you see in the upper left corner of the above collage (she actually tried on more than the number of bras pictured here, and that’s an Anthropologie top, in case you’re wondering). It looked gorgeous after her fitter Shawntell worked her magic, but when Tina tried to put it on herself while Shawntell rounded up other styles, she ended up with quadraboob.

One reason that she ended up with quadraboob was my insistence that she Scoop and Swoop to make sure that all her breast tissue was swept in from under the arms.  This is not something that Shawntell emphasized either with me last week or with Tina on Sunday. Faced with the results of Tina’s Scoop and Swoop, however, Shawntell taught her how to settle herself inside the cups, something I always need a refresher on. Later that day, Tina proclaimed Shawntell “the best adjuster I’ve ever had”.

Tina walked away with four new bras on Sunday–the Chantelle 3086 in 30F because it was so pretty, the Freya Deco in 28F, the Panache 3371 in 30F, and (I think) the Panache 3376 in 28FF. Even better than her new bras, however, she now understood how to make her old bras look better. After her fitting, even the 32D La Perla that Tina wore into the store looked pretty good. 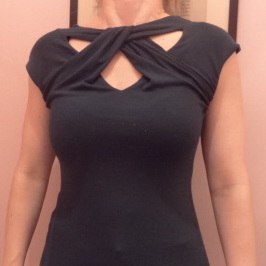 We began the fitting at 1:50 in the afternoon and walked out of the store at 2:30. In real time, it was only forty minutes, but in “real feel” it was three hours, according to Tina. For Tina, this goes with the chore-like nature of bra shopping, and she will gladly return in a year for more of Shawntell’s expertise. She likes having someone do the legwork of choosing piles of bras for her even if she felt it was like taking her clothes off and waiting in a doctor’s office.

Of course I agree–I would choose a great doctor in a shabby setting over a mediocre doctor in a beautiful office, and I would choose expert fitters with great inventory over mediocre fitters with limited inventory in a spa-like setting. But if Town Shop could make the dressing room experience a more beautiful one (more space, nicer carpeting, and something to look at or do while waiting for the fitters to return with bras to try would be a start), you won’t hear me complaining. Would that make bra shopping less of a chore for someone like Tina? Would it result in more sales for the Town Shop? I’d like to think so, but I’m biased. What do you think?

I’m also curious to hear how you add value to your friends’ bra fitting experiences?