Each month, Hourglassy features its adopted cause for the year, Support1000. Last month I described how the bras donated to an organization in Chicago benefit girls in foster care in Georgia. This month we’re looking at how Support1000 processes the bras it receives and makes sure they get onto the right bodies.

Step One: The Post Office calls them “the Bra People”

The post office has giant bins full of packages ready for a volunteer to pick up twice a month. 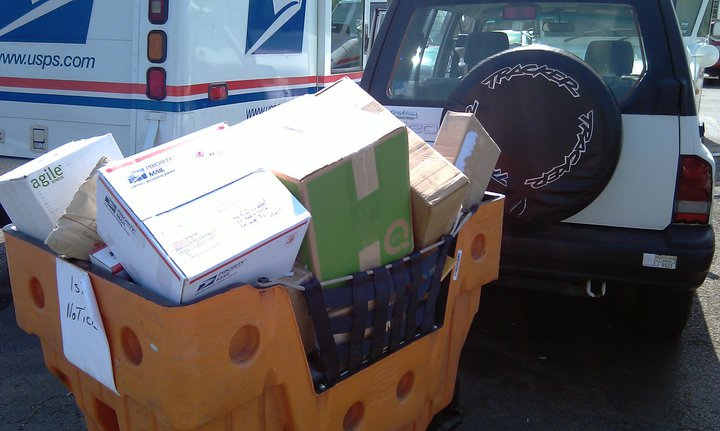 From the post office, the volunteer takes the packages to the Support1000 storage space and sorts the bras into bins by sizes.

I have a hard time putting a single load of laundry away, but six core volunteers balance the post office and sorting duties with full time careers and families. No one is paid–they simply believe they should keep Support1000 going. (I should mention that Support1000 has grown to the point where it is looking to hire an executive director.)

Next, a volunteer reaches out to organizations that have recently contacted Support1000 or that have received donations in the past. The organizations have a giant turnover in the populations they serve, so they never request a specific size for a specific client. Instead, they try to keep sizes in stock that their clients tend to need.

The volunteer generates lists of numbers and sizes that each organization needs in preparation for Step 4.

Every 4-6 weeks, a group of core and occasional volunteers gathers from 9:00 a.m. to 3:00 p.m. on a Saturday to pack and ship bras for the organizations identified in Step 3. Since Support1000 began with the goal of collecting  just 1000 bras, its target has become 1000 bras per Pack and Ship, and they usually reach their goal. It’s hard to imagine that when they first began, the volunteers worried that they would run out of bras! 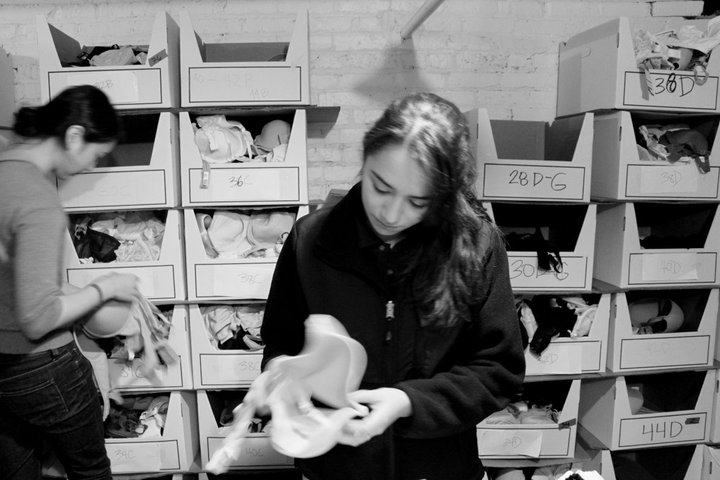 As you would suspect, a majority of the donations are in the smaller size range. Support1000 receives a lot of A and B cup donations. Julia Green, the board member I interviewed for this post, explained it this way: “Unless I go through a major body change, there’s no way I’m getting rid of my 34DD’s until I’ve worn them out.” We all know how expensive D+ bras can be, and we don’t tend to purchase them lightly! Impulse spending is easier with smaller cup sizes, so those are donated more frequently–and in cuter colors than the beiges, whites and blacks that the D+ donations tend to come in. (Realistically, however, if I were on the receiving end with just one bra in my possession, I would want to begin with those beiges, whites and blacks.)

Are you in the Chicago area? Their next Pack and Ship is on May 4. Living elsewhere? Send your D+ donations to the Support1000 post office box with with this donation form (note that an extra $1 donation per bra also helps with shipping). And make it easier on the sorters by clearly tagging the size for them (you know how faded the print can get, even on a bra that’s in great shape).

3 Comments on Bras and Dignity: How Heavy Lifting by Support1000 Gets Your Bra Donation Ready to Do Its Heavy Lifting