I took this photo at my grader’s holiday party.Â  Doesn’t this woman look amazing in this dress?Â  Since almost any D+ woman would also look amazing in it, I asked its wearer where she bought it.Â  (To find out if this woman is a D+ cup herself, read to the end.) 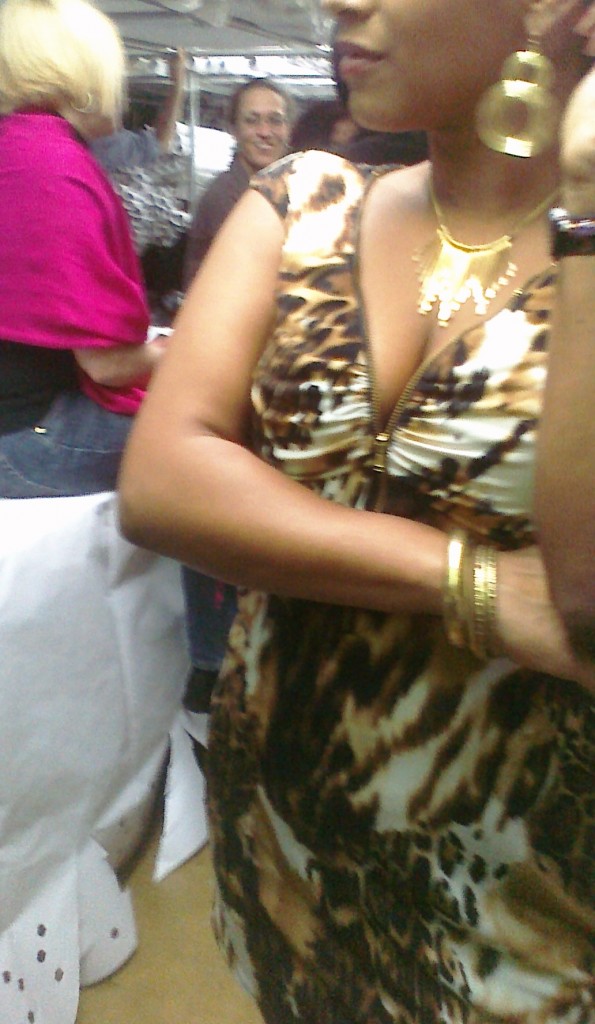 It turns out the dress is a sample from the clothing manufacturer where she works, and none of the buyers picked it up for their stores.Â  “WHY NOT?” I asked.Â  She gave me two reasons:

Her tone of voice as she described her company’s target end-user was slightly disparaging, as if these women must (a) be overly modest and timid or (b) have really let themselves go.Â  She herself has a 19-year-old son, and you can see that she hasn’t let herself go.Â  The idea of wanting to hide anything was clearly a foreign concept to her.

I was nodding along in sympathy until a little voice in my head said, “Wait a minute! Those are exactly the dresses you’re always looking for–sleeved and tummy-camouflaging!”Â  This got me thinking that my preoccupation with hiding or disguising certain body parts may be getting in the way of some great looks, including the bikinis I wrote about earlier this month.

There are certain settings, like a corporate office, where it’s probably better to err on the side of hiding or disguising our large busts, but not even that is a hard and fast rule.Â  And that’s my point:Â  we should always be questioning and re-examining the hard and fast rules we’ve set for ourselves. . . be willing to try new things and see ourselves from a different perspective . . . experiment with Hide Me/See Me/Look at Me, the three dressing attitudes I’ve written about in the past.Â  It’s true that our unique personal dressing rules can help us shop efficiently because we will avoid pieces that we “know” won’t work on us, but every now and then we should take a little extra time in the dressing room to revisit what we think we know and to challenge our assumptions.

Finally, I didn’t only ask this woman where she bought her dress.Â  I also asked her, “Are they real?”Â  (Yes, I really did!)Â  As you know, I’m terrible at being able to tell the difference between augmented and natural.Â  If this woman had answered, “I paid for them,” I wouldn’t have been at all surprised because of the way she displayed them; so I was surprised when she answered, “Yes, they’re real.”Â  Then I was extremely relieved when she took my question as a compliment.

To her, my question meant that her pushup bra was doing its job.Â  I think you’ll agree that she was wearing one hard-working pushup bra when I tell you her cup size:Â  a B cup.Â  I’m not entirely convinced that’s her real size, however.Â  What do you think?