I’m way overdue on the Dirty Dolls Lingerie update that I promised you last month.  You first met Courtney and Erica on my blog in February and April 2009.  If you’ve checked out their website recently, it won’t look like much has changed since then, but a lot has been going on behind the scenes. 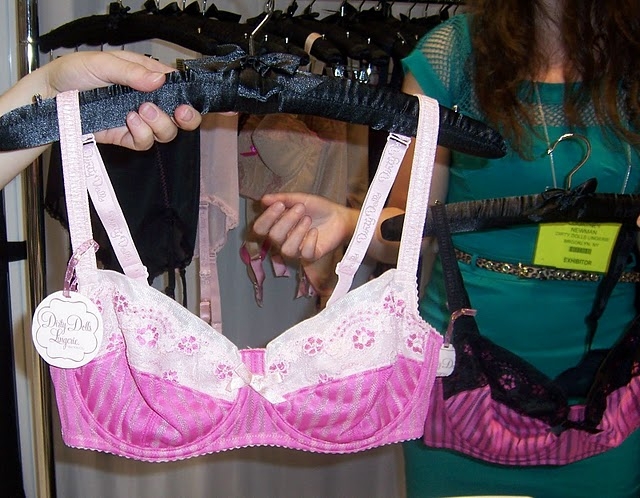 For instance, you won’t be able to find their basic everyday bra much longer because they’ve decided to focus on pretty, special pieces, like the two versions above of their new Pinup Pinstripe that fits up to a 28DD, a 30F and a 32-38G.  Erica told me that they spent forever with a fit tech on this style, concentrating on getting the fit just right instead of rushing into even larger cups.  Now that they’ve perfected the G cup in their pinstripe, you can also look forward to it being offered in their corselette in the future.

They’re also concentrating on bringing a longline strapless to you sometime soon–one, according to Courtney, with “no falling out or falling down.”  Yes, please!

Finally, Courtney and Erica are continuing to use the strong power mesh that they have used in their pieces from the beginning (and that we now understand is crucial for our support).  You won’t only find it in their bra bands, but also in their new shaping panty that you can barely see in the back left of the photo above.  It’s adorable, with removable garter belts!  For a better view, check out the two video interviews with Courtney and Erica from The Lingerie Post and The Lingerie Addict.

I respect the slow, careful growth of this company.  As one of Courtney and Erica’s target customers, I like knowing that they are working to give me beautiful, quality pieces that fit perfectly rather than hurrying to present as many styles as possible, without being certain of fit.