After an experiment with off-the-rack dresses, I made my next appointment at Mark Ingram Bridal Atelier. My consultant was the fantastic Kelsey. When she asked me what style dress I was interested in trying on, I showed her a couple of picture of dresses I liked, but told her my bra size and clothes size and asked her to use her expertise and bring whatever she thought would fit and flatter me. A few minutes later, she brought in 3 dresses that fit my shape and my budget! 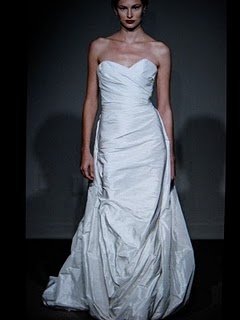 The first was a very simple A-line. It fit, but it was a little ho-hum. The second was a silk taffeta Ulla-Maija in a kind of 50s retro column style. I’d never seen anything like it and it looked stunning on. Unfortunately, I busted out of the top (take a look at the photo of the original dress, right, via Ulla-Maija’s web site, to see how much — or, rather, how little — fabric is used around the bust). Kelsey, however, instantly put me at ease. She told me that a half-muslin would make this dress a real possibility for me.
A muslin is basically a practice version of a piece of clothing that a designer makes from inexpensive material so they have a customized pattern. They use this pretend version of a garment for fittings before they cut their real material so they don’t make any expensive mistakes. Foxy Wedding has a good explanation of the process here.
Ulla-Maija was one of the designers that Mark Ingram carried who would make a half-muslin, from the waist up, on request. If I purchased the dress, my measurements would be taken and sent to the designer to begin work on the half-muslin. On my first fitting, I would just be fitted in the half-muslin and nothing else. The half-muslin would be sent back to Ulla-Maija with alterations. Then, on my second fitting, I’d be fitted in my actual dress, including the custom-made top half. This additional step would ensure that the dress fit my bust BEFORE the designers ever cut the actual material for my dress.
TIP #2: If you’re busty, ask your bridal consultant if they have any designers in their store that do half-muslins. Ask to try on those designers, and then if you like any of them, see if a half-muslin would be a possibility for that dress.
I knew that I’d found my dress, but since I’d only tried on a handful of dresses at this point, I decided to go to Kleinfeld’s … just to make sure. Read about that experience (and an experience it was!) tomorrow. (Nothing after the jump.)

2 Comments on The Pain-Free Guide to Getting Your Dream Wedding Dress, Part 2: The Half-Muslin