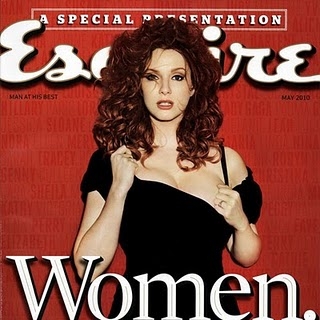 (image via Esquire, see more here)
Coupled with the fashion industry’s awareness of a booming full-figured bra business and the not-stick-straight models at Prada and Marc Jacobs earlier this year, it seemed as though we were starting to take big steps toward normalizing women with bigger busts in both fashion and culture.

Then, I came across this poll by KROQ’s Psycho Mike via Jezebel.com asking whether Christina Hendricks should lose a couple of pounds or if she was perfect the way she was.

Given the fashion industry’s tendency to lump large-breast and plus-size in the same category, when they ought to be treated as two categories in order to give women in both categories the best fitting clothes, I was disappointed to see this same reaction from the media about a real woman’s body. When I first saw the poll on Thursday, the split was 90/10 in favor of Christina’s body as is. Now, the poll is 80/20 in favor of her losing weight. Though it’s discouraging that a woman with a big bust can’t be held up without being told she’s a big girl, take a look through the 158 comments, most cheering Christina’s figure, for a big boost of confidence. Despite this poll’s results, there are plenty of people who like and accept a large-breasted body type!